A Christmas Tale of Woe 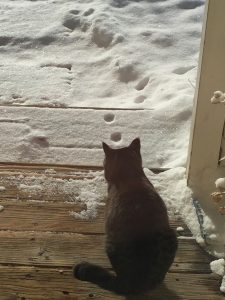 Note: I write about my parenting experiences not only to show by example how to honor deep feelings in children so that those feelings don’t morph into anxiety but also to illustrate what it looks like to tend to our own difficult feelings. If you don’t have children, I invite you to put yourself in the place of the child in the story and imagine it to be your own inner child. Whether or not you have children, you can read my parenting posts in both ways.

We woke up Christmas morning to a world sparkling in snow with luminescent angel-flakes shining in the morning sun. My body felt rested. My heart felt happy. I was ready to celebrate the day.

But while I was filled with gratitude and love, my boys weren’t so happy. The gifts that my husband and I had ordered a week before Christmas hadn’t arrived, so it was going to be a present-less Christmas morning. My older son, normally of sunny disposition, was walking glumly around the house. My younger son, still hopeful that his gift might arrive later that day, was a bit more sprightly. But when one of us in the family is down-in-the-dumps it effects all of us; such is the deal when we’re all highly sensitive, deeply bonded to each other, and, according to attachment theory, sharing a nervous system. So the mood in the house was anything but merry.

And I’m sad to say that I didn’t handle it very well… at least not initially.

Seeing my son’s mood was taking me down, and I found myself doing exactly what I advise people NOT to do when it comes to being with feelings:

Of course, all of this just made things worse. What started as pure disappointment and sadness turned into whining and complaining. We could feel the tension building. Finally, taking a deep breath and recognizing the error and futility of my ways, I dropped all of the rationalizing, justifying, and redirecting and instead dropped into the feelings with him. “I’m so sorry, sweetheart. I know you’re so sad and disappointed, and of course you are. It’s Christmas morning and you have no presents to open. We’re sitting here around an empty tree and it’s sad and disappointing.” I could feel the energy shift in the room. I walked over to him and rubbed his back, sending love into his being. Without trying to shift him out of his sadness, the tension lifted and he was given room to just feel his feelings. Sadness took over the room. He said so clearly and from the heart, “We always open presents Christmas morning. I’m just sad.”

We’re sitting in sadness now, I thought. We’re letting sadness be a part of this Christmas morning. It’s 9am and we have an entire day to be together and have another experience, but right now, on this Christmas morning, we feel sad. And it’s okay. Once we stop fighting it, it’s okay. It’s fascinating and somewhat mind-boggling to me that I can so easily hold space for the difficult feelings of my clients, friends, and even myself, but when my husband or sons are struggling I sometimes revert to some deeply engrained or culturally learned habit of trying to talk them out of their feelings.

And then, somehow, it became more than okay; it became beautiful. My thirteen-year old son, big and teenagey and trying to figure out how to individuate, came over to me and we sat together on the couch for almost an hour. I massaged his head and we talked a bit about where we were last year on Christmas, but mostly we just sat together in silence, in the space of pure love and contentment that has lived between us from the day he was born. Once in a while he would say, “Why didn’t my train arrive?” and I would put my hand on his chest and invite him to breathe into the sadness instead of the question. It was the sweetest part of our day, and while he may not have consciously registered it as a gift, hopefully on some level he knew that it was. It was certainly a gift for me.

The miracle of letting ourselves feel our feelings is that they eventually move through us. Like sun to fog on a cold morning, once we breathed the warmth of acceptance into the difficult feelings they started to dissipate. By 10:30am, the energy was a bit lighter. By noon, we were laughing. And by 1pm as we stood with about a hundred people at the Muslim-Jewish alliance and organized ourselves into groups to distribute gifts to the local fire departments and nursing homes and prepare to offer dinner at the homeless shelter, the mood had shifted completely. A woeful morning turned into a delightful day, and maybe he learned, yet again, one of the most important lessons of life: that feelings are manageable, and that the more we allow ourselves to feel them completely, the faster they move through us. Or maybe it’s me that needed to learn that lesson again. How the learning never ends…