A Love Story is the Medicine for the Fear of Loss 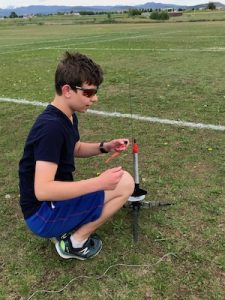 It was one of those moments that I could have easily pushed aside and continued on through my evening wrapped in the spiderweb of distraction. It was a moment so small that I almost missed the worlds of beauty and pain that lived within it, like a monarch butterfly floating past and I, caught in the clouds in my head, fail to recognize the utter miracle of this creature’s existence.

But that night, I paused long enough to witness the moment and allow it to stop me in my tracks, and when I did, I recognized it as one of those moments that pierces the soul with its intersection of loss and love, when time both stops and becomes amplified, as if someone dropped a solution in my heart that caused it to dilate from the magnitude of the vulnerability of loving: of what is required to take the risk of love every single day.

I was lying next to my younger son, newly ten years old, snuggling in for our nightly bedtime ritual. We were talking about our day up in the Rocky Mountains, and something arose about his older brother, Everest, who would turn fifteen in a few months. Asher asked, “How many years until Everest is an adult?”

“Three years? In three years Everest will be an adult?” Asher was amazed.

And there was the moment.

The drop in my stomach. The prick of tears in my eyes. In three years, my firstborn will be an adult. In a flash, my heart ached with the memories of pushing Everest in a stroller and regularly being stopped on the street by women in their late forties, where I am now, to tell me, “Appreciate every moment. It goes by so quickly.” We hear this constantly as new mothers, and in the stress of those early years when endless night-wakings and meltdowns and the unattainable goal of regular naps elongates the days, it seems impossible that time will move quickly. But it does.

I remembered when Everest was a few days old and I was completely overwhelmed by the demands and shock of new motherhood. I held him on my lap in our bed, surrounded by crumpled sheets, my tank top stained with milk, sleep-deprived and miserable, and thought, “At least it’s only eighteen years.” I felt a pang of guilt when I heard the thought – after all I had just become a mother and I was already thinking about sending him away – but because I was deeply steeped in the framework of transitions I knew that the thought stemmed from an escape-hatch fantasy that was trying to lift me out of the overwhelm and misery of postpartum shock, when it felt like my entire identity as I had known it until that point in my life had been devoured by the fissure caused by the earthquake of my son’s birth. Falling through the groundlessness of the liminal zone, my mind grabbed onto the first foothold it could find: that this misery would be finite.

But as soon as shock gave way to falling in love, I laughed at myself, and from that day forward the thought of him leaving one day filled me only with sadness. But it was so far away – eighteen years, twelve years, eight years. Until it wasn’t. Until the vista that receded far into the horizon was within view, which is what happened that night. I could touch the moment of his leaving, and the awareness of it, when I let it in, submerged me in grief.

When the awareness arises now, I think about my neighbor, whose eighteen-year old son will be leaving for college in the fall. I’ve been watching her closely, looking for clues about how a mother navigates this transition. Just like I learned how to use the Ergo sling from watching other mothers, so I will learn how to walk through this soul-quaking transition by looking to my community. Recently, I asked her how she’s feeling about the impending departure and she said, “I cry every morning. The part that makes me so sad is knowing that I won’t be able to touch him. Even at this age, he still puts his head into my lap and hugs me every day. The other day I was looking at pine cones that my mother sent and I thought about how next winter, when we’re getting ready for Christmas, it will just be the three of us. S won’t be here. And I wept.”

What I’ve learned over the years is that when I don’t breathe fully into the moments of pain and allow myself to surrender into the waters of grief, the normal and inescapable human sadness that accompanies loving and living will morph into anxiety. Hours later I will find myself ruminating about one of my mind’s favorite go-to stories about our house or health, and if I can catch the rumination before it spirals into hamster-wheel hell and remember that it’s a messenger, I can track it back to the original source, which is that one moment of raw pain.

We probably experience a dozen of these micro-moments in a day – moments when the searing pain and breathless beauty of our existence as humans collide –  but they’re often eclipsed by the increasingly fast pace of our lives keeps us in near-perpetual distraction. Or perhaps there is some of part of our hearts that intentionally misses them because to take them in without a way to move them along the channels of emotion feels unbearable. It’s like this quote from Richard Zimler’s “Guardian of the Dawn” that a blog reader recently passed along:

“As we stared at each other, the intimacy between us became too deep – as if we might both fall inside and never find our way out. It’s odd how life must be lived on the surface of things. Otherwise, we would grow too cognizant of the little farewells and deaths we live every day.”

I understand this sentiment completely. But what if we’re not meant to live on the surface of things? Or what if we’re evolving our emotional capacity to learn how to tolerate and even grow through the “little farewells and deaths we live every day”? And what if, by recognizing and allowing ourselves to feel these smaller moments of loss as they arise, we’re better able to manage the bigger moments of loss; when we feel the aches that bubble up in the months or years prior to the final day instead of avoiding them we’re actually preparing ourselves for the moment of transition. The moment when I look at my grown son in the eyes and hug him before he crosses over the threshold of adulthood that will open both of us to the next stage of life: him as an adult in the world, and me as a mother at home with one more child who will, in a few short years, cross the threshold as well, when the cycle of grief and loss and renewal will start all over again.