Alanis and the E-Course: Lesson 7 (Incomplete) 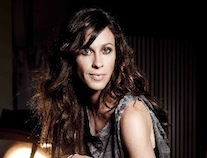 “I’m redefining for myself what a marriage is.” – Alanis from The Interview

Lesson Seven of The Conscious Weddings E-Course is “What Does Marriage Mean Today?” The short answer, as Alanis states above, is that marriage today is whatever you want it to be. There are no blueprints or formulas to follow for a marriage to thrive. But most people enter marriage with a set of unconscious expectations – based on what they witnessed growing up and an old, historically-imprinted model of marriage – of what they think marriage is “supposed” so look like. They ask, “Am I supposed to cook dinner for my husband every night because that’s what my mother did?” I rarely encounter women who cook dinner for their husband every night, and when they do it’s because they want to, not because their partner expects it. But still the unconscious expectation runs deep and on the threshold of marriage it filters up to consciousness.

And that’s exactly where it should be. Once the expectations becomes conscious, you can bring them to your partner and say, “Hey, I know you’ve never expected me to cook dinner for you before, but after we get married is that going to change?” To which the guy invariably responds, “Uh, no. I’m not thinking a whole lot’s going to change.” One by one she checks her expectation against his expectation and the two come to realize that it’s true – not a lot will change externally in terms of household tasks.

But there’s one expectation that both people usually carry that doesn’t filter up to consciousness: that marriage is completion, and once married, they will be fulfilled and happy. One of the gifts of engagement anxiety is that that fantasy comes crashing down and shatters all around the engaged woman. She has to look at her partner through the lens of reality and realize that he’s not going to save her from her own pain, fear, grief, and anxiety. There’s no such thing as a knight in shining armor that will carry her off into the sunset and “happily ever after” only exists in fairy tales. It’s a hard crash down to earth, but better it happens during the engagement than in the first months of marriage.

One of my favorite parts of the E-Course is the interview with Kevin Kimball in Lesson 7. Kevin and his wife, Jill, have been married for 29 years. I interviewed them the first time about ten years ago as part of my research for writing The Conscious Bride. They spoke with such beauty and honesty about how most of the struggles in their marriage were caused by a belief they each had that the other was supposed to fill them up, complete them, make them feel whole and alive. Kevin longed for the “euphoria” he had felt when they dated and spent the next fifteen years of his marriage falsely assuming that, because it wasn’t there, there was something wrong with him, Jill, or the marriage.

At a breaking point in their marriage, they both started doing their own inner work that eventually healed their marriage and allowed them to experience real, shared love from a place of their own individual wholeness and aliveness. As he says in the written interview (there’s also an MP3 audio interview with him), “The sense of fullness that I have is far richer and far more solid than the sense I had when I first falling in love. When I was falling in love I was only happy when I was with this other person. I believe [now] that this sense of euphoria is something you bring from each individual and that the relationship can be the medium where that euphoria, love, creativity can be expressed with one another.”

Alanis expresses this so beautifully in her song, Incomplete. We yearn for completion, yet we are “forever incomplete”. It’s our lot to bear: there is no perfection on this earth, only the acceptance of our own and others’ humanity. Marriage won’t complete us or bring us that long-sought after happiness, but it can certainly be a vehicle through which we learn about love and, in so doing, create more inner wholeness and shared passion. We can chase after the goal but eventually, or in those moments of grace, we accept that life is now and only now. Marriage isn’t the finish line. Buying a house isn’t the finish line. Having a baby isn’t the finish line. We taste moments of wholeness when we surrender to the incomplete perfection of now.

Thank you, Alanis, for this gorgeous, vulnerable reminder. Thank U : )