And So I Sing at the Intersection of Summer and Autumn 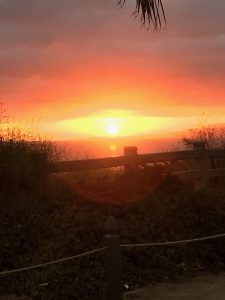 “I hear crickets,” my son says as we pull into the driveway. We pause to look up at the stars, as we always do, before entering the house.

“Yes, I heard them for the first time a couple of nights ago,” I respond.

“Oh,” he says, with a note of sadness in his voice. “That means summer is ending.”

Yes, that is, indeed, what it means. And even as I write these words, I feel a space of grief opening up in my chest, as subtle as butterfly wings, it would be easy to ignore it.

But I don’t ignore it. Instead, I breathe into that space until the breathing transforms the emptiness into fullness, as if my breath itself is the only fullness that the empty space of grief needs. I stay with it, allowing breath to give permission for tears to arrive. And the tears, too, fill the emptiness with fullness. The fullness of feeling life in all of its mystery and complexity, from the ache of grief that leads us to the surge of aliveness. The fullness of being human, of being awake to the nuances of life, to the quiet, almost invisible layers that float all around us which most people rush past.

Highly sensitive people can’t rush past. We can try, but that only leads to anxiety and intrusive thoughts, for when the grief isn’t named it morphs into anxiety. It doesn’t want to go into anxiety. It wants to be held and tended to, like a baby bird with its mother. It wants to be fed and seen and known. But if we don’t know how to nurture grief, if our sensitive nature was shoved down long ago in response to the messages of “too much” and “not enough”, the grief has no choice but to hide out in the darkness of a shadow-cave until it’s safe enough to re-emerge into light.

A few nights earlier, my son and I sat on our screened-in porch, waiting for night to enfold us into her darkness We’re both lovers of night. He, the baby who at times could only be soothed by the sight of the moon, and now the young man who longs to travel to that white-silver orb. Me, the one who has nurtured a love affair with the moon since I was fourteen years old and I first bled on river banks. We sat together in the inky night and talked about the passage of time, of how he will be turning seventeen in a couple of weeks and the sad-joy of an upcoming birthday. I reminded him that he was the young boy who felt sad before every birthday because he was tapped into that layer of loss that all highly sensitive people are aware of.

Two thresholds tug at our hearts: the end of summer and the end of sixteen, which means one year closer to his time living at home.

Autumn is near, the season of loss and letting go.

We notice these things, my highly sensitive son and I. You and I.

We notice that the light has a different quality; when I walk in the evening it fades to midnight blue then black a few minutes earlier than it did the evening before.

We notice a slight crispness in the air in the morning; when I stand barefoot on the grass I pause before walking out to my studio so that I can absorb the warmth, so that I can cloak myself in sun and bring it with me into winter.

We notice the quality of wind: I lie on my bed on a Friday afternoon and watch the storm clouds gathering, the leaves at the top of the cottonwoods blowing wildly in the sky who brews plans.

So I stand in the center of the polarity: holding the heat of summer with the coolness of autumn; the grief of ending with the joy of beginning. For it’s not that I don’t love autumn and winter; I do. The sadness is not so much for what’s coming but for the recognition of the shift.

For the highly sensitive person, every shift is a change, every change is a loss, and every loss is a grief. I stand with my arms outstretched, just as I do when I’m holding space for clients, just as I do when I pray through song at the creek’s edge. Perhaps it’s the posture that signifies my willingness to hold polarities, to glide into the spaces of light that weave through the darkness of mystery, and to join hands with the mystery itself: that intersection of death and life where our freedom lives.