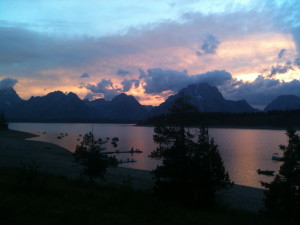 We live in a very loud world. The industrial revolution shattered the silence and rhythmic sounds of the natural world and the technological revolution has escalated noise to new heights. It seems that most people can hardly last three minutes without grabbing some electronic device that breaks the silence and infuses it with a cacophony of unnatural sound. Silence is quickly becoming a lost art, and it may be irretrievably lost if we don’t intentionally protect it.

The constant soundtrack of machinery and gadgets dovetails perfectly with the extrovert ideal that informs our culture. We hold talking in very high regard. We value babies who are bubbly and chatty with strangers over those who prefer the quiet spaces of home. We place a high premium on the verbal aspects of intelligence (which is why girls tend to perform better in school). The boisterous, football-playing, party-going teenage guy will attract more attention and praise than the quiet, studious boy who hangs out in the library. There’s certainly nothing wrong with extroverted qualities, but in a culture that values extroverts over introverts we run into trouble when we judge ourselves and others for not talking or being social enough.

When it comes to relationships, couples often worry when they don’t talk enough. One of the top concerns among my clients and ecourse members is, “Is it okay to sit in silence with my partner? Doesn’t that mean we’re boring and we don’t have enough to talk about?” My answer is that it depends on the type of silence: connected silence or disconnected silence.

Some of the richest moments I have with my friends and family are when we can sit in connected silence together, each of us deep and content inside our own minds. It often happens while we’re driving that I’ll look in the rearview mirror to see my older son looking out the window at the fields of cows or big sky and my younger boy in wide-eyed reflection. I admit that sometimes I have to fight the urge to break the silence with a meaningless question or to turn on some music; this is how strong the conditioning is to fill the space. But I don’t. I observe their faces and then delight in the opportunity to wander around in my own mind in the company of my sons. And nothing is so sweet as driving with my husband in silence while our hands communicate everything that matters as they bridge the gap between our seats.

On the other hand, there’s nothing worse than disconnected silence. This is the tense silence that you can slice with a knife and carries anger, resentment, or unresolved conflict. This silence results when one or both people have closed their hearts and are no longer willing to connect. It’s painful and lonely to sit in this silence, but it seems to be a part of every intimate relationship at times.

There are so many ways to be together, so many ways to communicate. Talking is certainly one of those ways but it’s not the only way, and if you find yourself talking just for the sake of talking try to hold back and allow for the presence of silence. Many people talk from an anxious place, either because silence incites the anxious chatter of, “There must be something wrong with us. If we don’t have anything to talk about our relationship is doomed,” or as a way to try to stave off the anxiety. Better to restrain from your habitual ways and see what happens when you sit quietly with yourself and another.

The following quote comes to mind by Susan Cain, author of “Quiet: The Power of Introverts in a World that Can’t Stop Talking”:

“…[T]he next time you see a person with a composed face and a soft voice, remember that inside her mind she might be solving an equation, writing a sonnet, designing a hat. She might, that is, be deploying the powers of quiet.”

In a world that can’t stop talking, a practice of silence must be cultivated. The next time you find yourself alone – in the car, on a walk, at home – see if you can resist the urge to fill the silence. The habit will be strong to reach for the phone, computer, television remote, iPod – anything to break the silence. At first it will be uncomfortable. It’s always uncomfortable to break out of what’s familiar. Stay with the discomfort: notice it,  breathe into it, become curious about it. It’s just energy. It’s just an uncomfortable feeling. But once that passes you may notice something else emerge: grief, perhaps; a new idea; a memory; an image that captures your imagination. If you stay with it long enough, you will discover a gem inside the silence, a moment that will never be found if you fill your life with noise.