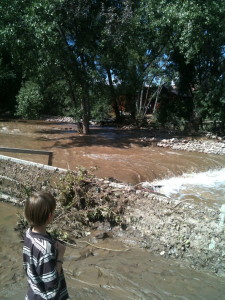 “We must drop unguarded into the holy bath of grief, inside of which all truly happy men and women must bathe to transform the great losses of life, in war, sicknesses, the loss of homelands and the loss of one’s confidence in human decency into a wailing that ends in poetry and elegant praise of the ability to feel. For desire, mistaken for love, without the capacity to truly feel the losses that actual loving entails, is what makes murderers of people who have no home friendly enough to allow them both the complete sadnesses and joys their love can feel.”

There are certain archetypal events that change a life, that leave an imprint so deep on psyche that even if the conscious mind forgets the date, the unconscious reminds you every year through shadows of memories, dreams, and sensations of the day that you were forever changed. These are the “before and after” events, like “before my mother died” or “after my parents divorced”. They’re markers that etch a river of pain in the landscape of a life, an invitation to grieve both stored and current grief so that the channels are cleared and deeper pools of joy and gratitude are revealed

I’ve experienced two such events in my life. The first occurred on February 12th, 1993, when I had my first panic attack while driving down the 405 freeway in Los Angeles. Three months shy of graduating from college, the panic attack, in one fell swoop, irrevocably altered me and charted the course of the rest of my life. Prior to the attack, I was sailing along in a bubble of innocence and arrogance, living in a glass castle of believing that I had a charmed life. I say this with my head bent and my tail between my legs, but it’s the truth. It was the panic attack that shattered my glass castle and initiated me into the underworld of anxiety, and, as such, it was the panic attack that led me to do the work that I do today. For many years, I longed to return to my life before the panic, but it eventually became clear to me that the panic and ensuing years of severe, debilitating anxiety were the greatest gifts my psyche could have offered.

The second archetypal event occurred two and a half weeks ago on September 12th, 2013. It’s so raw and fresh that even writing that date brings tears to my eyes as I recall the moment I opened the curtains to greet the day and saw the flood of water rushing through our land until it reached our deck. It’s a moment I’ll never forget. It’s a date I’ll never forget. As I said, in years to come the intensity of September 12th may recede to the point where the date passes by without consciously recalling the flood. But there will always be some part of me that will be off-kilter before and on that date. It’s indelibly printed like a leaf pressed onto the scrapbook of my psyche, like the river that gouged her mark forever into our land.

When these events hit, the natural instinct is to flee. And I don’t mean run from the actual event (although that may be true as well); I mean escape from the flood of pain, overwhelm, and sheer terror that wash over you during these torrential storms of psyche. The pain is so great that you pray for it to end. You long to return to the “before”, when things were calm and predictable and lovely. I hear it all the time from my clients and e-course members struggling with relationship anxiety: I just want to go back to the way things were before. But there is no returning, and no matter how much you pray eventually you must face the only choice you have: to dive into the darkness and discover the messages that lay hidden in the shadows.

But as I drove away from my spiritual teacher’s studio last week while crying buckets of tears, I heard a glimmer of light: There are messages in the mud. “This is the dark feminine,” my teacher said, whose sacred land was also destroyed by the water. “This is Kali, the destroyer.” I’ve had a five year love affair with my land. I’ve written love poems to the green beautiful manifestation of the feminine. And now it’s time to dive into the shadow side of creation and get to know destruction.

Walk into this mud, I hear.

There is wisdom in the cliff that has replaced the gentle slope that led to the creek’s edge.

Gather up your skirts and your courage and excavate the mud like an archaeologist of the dark feminine.

Move toward the great power of the serpent that snaked in ten foot surges through your land and left behind destruction.

You have borne witness to great life and great death. It is a privilege. It is a gift.

You, who isn’t afraid of the dark, messy places, walk to this new place, the razor’s edge between life and death. There is beauty in the darkness as much as the light.

You, who have reveled in the hieroglyphic leafprints, must divine the new messages. They are here. Do not run away. Move toward.

Move toward. It’s what I tell my clients and program members every day. Move toward the anxiety, the fear, the heartache, the unknown. Move toward the pain, which is an umbrella word for anything uncomfortable: Loneliness, vulnerability, heartbreak, disappointment, frustration, grief. Our culture teaches avoidance, distraction, and denial, but the way to freedom is through the center of the storm. Move toward the places that scare you, as Pema Chodron would say.

A few months ago in the height of spring, I wrote the following poem. It pains me to read it now as the land that inspired the poem is gone. But new poems will arrive. Darker, perhaps, but no less essential.

It’s in the world beneath this world

where poetry and prayer dwell and

where angels dance by moonlight

that I long to live.

When I touch down into that place,

like dipping a watering can of soul into creekwater,

worry and chatter fall away and

I sit in conversation with the spirit woman who sits

in the tall grasses,

We walk the woods to read the

words written in the leaves,

each vein a haiku,

These are the things that matter that

we cannot see at first sight,

that appear by no other light than

incandescent memory of the way we used to live.

What hieroglyphic words are written on the

veins of one green leaf?

What golden notes rise from the

sound of water falling over rocks?

What hands hold me in warm embrace when

I lie down on the cool earth at noon?

What ancient storis spiral up and down the

back of a 100-year-old cottonwood tree?

These are the lessons I long to learn, to

sit quietly on this land,

my sons in my lap, and receive.

Now, as I walk the land and feel our descent into autumn, I weep. I stand at the pyre of felled trees and weep not only for our own losses, but for the losses of our neighbors – many of whom were hit harder than we were  – for the losses in our community in Boulder and the surrounding areas, and for losses of the Earth herself. Entire ecosystems have been wiped away, sacred groves where both sentient and non-sentient beings have made their homes. When I stand on the land instead of run away, the extent of the losses seeps up from sole to soul the way I used to feel the celebration of life when I stood on our land. There are lessons in this loss; this I know. 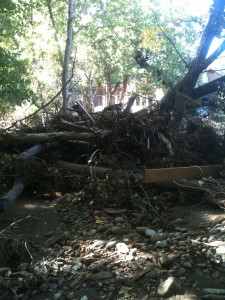 I say this to you now, all who are suffering through your own darkness and wrestling with the archetypal process that beckons you toward wholeness: This is a gift. I know it doesn’t feel like a gift. I know the pain and discomfort feel like too much to bear. But if you’re to harness the power of this crisis and turn it into opportunity, you cannot run away. You must throw yourself full force into the center of the storm with curiosity, with the questions, “What am I meant to learn? What is psyche trying to show me?” leading the way like a lantern in a dark forest.

What are my lessons that will emerge as I dive into this archetypal process? I don’t know yet. I know that, like the glass castle that was shattered at twenty-one as a result of the panic attack, this experience has burst my bubble of beauty that separated me from the way most of the world lives. I could also say that Boulder, our bubble town of spirit and consciousness-seekers, has been flattened into humility, an invitation to join the world in its struggles. I will never learn of a city being hit by a natural disaster in the same way again. I am you. I am here. I am struggling just as others struggle. I have been pulled into the descent, dragged into the underworld to embark on the next leg of my heroine’s journey. 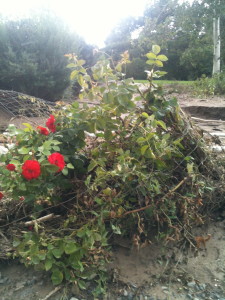 And when we emerge, there will be runes of poetry, for you and for me. Or paintings, dance, prayers, the play of children, songs or tears wailed at midnight under a full moon. It won’t be the poetry inspired by iridescent swaths of lawn catching the golden autumn sunlight. No. They will be poems discovered in the muck left behind by the dark feminine, Kali’s shadow spewing shards of moon like broken glass in her wake. But there will be wisdom in the poems. And lessons. For this is how we grow, my friends. It’s not by frolicking in the meadows until we find the rainbows, no; it’s in the willingness to transpose our experience into creative expression so that we shift from resistance to acceptance. It’s when we allow ourselves to dive deep into the underworld with a desire to listen and learn that we grow, in great painful surges, toward our next stage of wholeness, and in doing so, perhaps we repair not only ourselves, but a piece of the world.