Do You Trust Yourself? 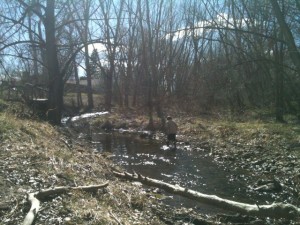 My sons and I often walk along the creek behind our house. It’s a time for us to slow down, recalibrate, and allow the wisdom of nature to infuse us with her knowledge. Our time in nature is an essential component to our sons’ education, not only in terms of learning about the natural world but their spiritual and emotional growth as well.

One day at the end of summer as we were walking my older son found two beautiful rocks. One had a shimmery quartz section in the center and the other was shaped like a heart. He often finds interesting rocks down at the creek, which gives us an opportunity to talk about geology and the earth. But today he wasn’t interested in the scientific aspects of these rocks. From the moment he found them, they seemed to find a special place in his heart. He held them closely for the duration of our walk, mentioning several times how beautiful they were. And when it came time to return to the house he found himself in a quandary.

“What should I do with the rocks, Mommy?” he asked.

“Whatever you want, sweetheart. You found them so you get to decide,” I responded.

“I don’t know. Should I keep them or leave them here?”

“It’s really up to you, love,” and I turned away slightly.

My kids ask me these kinds of questions every day. While they may seem like trivial decisions to adults, to a child they’re not trivial at all. In fact, these are the decisions that, when a child is allowed and encouraged to answer for himself, form the foundation of the self-trust that is a cornerstone of informing a healthy decision-making process as an adult. This is why I refuse to offer an answer.

“Trust yourself,” I say to him. “Whatever you decide is fine. You can’t make a wrong decision. Just listen to your heart and trust your choice.”

At that point, he usually closes his eyes and takes a minute to listen for the answer. On that particular day, after taking a moment to meditate, he said, “The rocks told me that they want to stay at the creek” and he left them on the banks. By making his own decision, one pebble of self-trust was added to his already healthy foundation. We returned to the house and he never thought about it again.

Most of my clients struggle with consequences of shattered self-trust. Whether it’s major decisions like whether or not to marry their loving partner or minor decisions like which apples to buy at the grocery store or what to order at a restaurant, they find themselves frozen like a deer in the headlights when it comes time to decide. They describe standing in the salad dressing aisle for ten minutes (or longer) deliberating on which bottle to choose. They find themselves bolting upright in the middle of the night in a panic about making a mistake by committing to the partner who peacefully sleeps beside them.

The underlying fear is of making the “wrong” choice, a mistake that they’ll regret, or of missing out. We’re so deeply conditioned, both by parents and our education system, to believe that there’s a right choice and wrong choice that when it comes time to make even minor decisions in life (like choosing apples), we’re scared of messing up. It’s like we believe that there’s a multiple choice test for every decision and if we fill in the wrong circle we’ll fail or conversely, if we answer “correctly”, the holy grail will be revealed.

Sometimes self-trust is destroyed in subtle ways as parents transmit the message that they know what’s best for their child. Other times the self-trust is overtly annihilated as a child by well-meaning parents who insist on playing the devil’s advocate. When a child says, “I want to eat an orange,” and the parent says, “But an apple would be so much better right now,” a piece of a child’s innate self-trust is broken. Of course there are times when a parent needs to be a parent and offer their opinion around more serious matters, like if a child wants to quit a class that he’s loved for years. At that time, the work is to engage in curious inquiry about what’s fueling the desire leave and hopefully discover if there’s any underlying reasons that can be addressed. However, even with sports or musical instruments, if the child is truly ready to move on without any extenuating circumstances, I believe that it’s loving parenting to trust the child’s innate sense of what’s most loving for him or her.

When the self-trust has been damaged early in life, it’s easy for a child – and later an adult – to hand over his or her authority to teachers, counselor, friends, professors, financial advisors, spiritual advisors (priests, ministers, rabbis), doctors and even therapists, until you wake up one day and realize that you’ve successfully abdicated responsibility in every aspect of your life. You’ve bit the hook that says that everyone knows better than you, that everyone else is the expert and it’s so much easier to trust others than it is to educate yourself and take full responsibility for your life.

Building or destroying healthy self-trust begins at birth. Babies know when they’re hungry, tired, and need to be changed. They know when they need to be held (which is almost constantly) and when they don’t want to spend time with an adult other than their parents. Our culture does a fantastic job of encouraging parents to distrust their own and their baby’s innate knowledge. We tell parents to “get babies on a schedule”, which means only feeding them every three hours and making sure they nap three times a day at the exact same time. It would be so nice if babies could be trained like robots, each one squeezed into the same societally prescribed box of desired behavior. But they’re not. Each and every one of them is born with a unique internal blueprint of neurological and spiritual wiring which informs their needs and rhythm. When we try to force them into the box by demanding our schedule instead of theirs, falling prey to the convincing argument that “children need predictability” or that, if we allow them to lead we’ll be giving them too much control, we squash their natural self-trust from the beginning.

But for the highly sensitive baby and child, formulas or schedules almost always come at a great cost. These children need a highly attuned parenting style that seeks to follow the babies inborn rhythm, sensitivities, preferences and aversions. They need a parent who turns the tables back on their child when they ask questions like my four-year old is asking in this very moment:

“Mommy, should I do a magic show now or when we go downstairs and Daddy wakes up?”

“Whatever you want, Asher.”

“I don’t know, either. Whatever you choose is fine.” I maintain my position that I don’t hold the key to his answers, and that he’s fully capable of deciding, even if it takes a few minutes. Because, of course, it doesn’t matter at all what he chooses to do in this case.

He throws a little fit, insisting that he really doesn’t know. And I continue to write, sending him the message that he’s fully capable of making this choice. He tries to enlist his big brother to make the decision for him, but I intercept by saying to Everest, “Let him answer for himself. Encourage him to trust himself.”

Finally, Asher says, “I can’t wait that long with a wand up my sleeve.” The magic show begins, and so does our day.

Note: This post was written pre-flood. We’re not walking by the creek these days, but we’re certainly learning about the land and ourselves in other ways, and we look forward to our creek walks again soon.