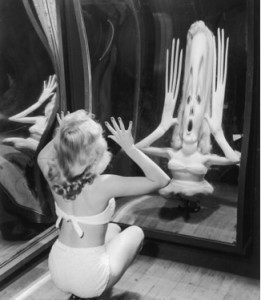 Somebody left these four words as a comment on Alanis Morissette’s Facebook page in response to our interview. I looked at the words for a minute then spelled out the acronym: F.E.A.R. Oh, yes. Yes yes yes. Fear is certainly False Evidence Appearing Real. It’s often extraordinary how much fear distorts our perception of reality. I’ll give you an example from my own life and then some current examples from my clients and E-Course customers.

I’ve been somewhat over-focused lately on a mole on my older son’s back. Now, he’s always had a constellation of four moles that create a perfectly straight diagonal line from his left shoulder blade to his lower back. I’ve loved these moles since he was a baby and have often marveled at the fact that they seemed to foreshadow his passion for science and outer space. Seen through the lens of love, my husband and I have smiled at the moles throughout the years and named them “Constellation Everest.” In short, they’ve always been a warm source of joy.

Then, a few months ago, a friend of mine went to see her dermatologist to have her moles checked. She has a family history of skin cancer so she’s vigilant about checking her moles. I didn’t think much of it until she told me that she was taking her young son as well and, as it turned out, the doctor expressed some concern about one of his moles. It never occurred to me that a child could develop skin cancer. My radar just wasn’t attuned to that topic. Until now.

The next thing I know, one of Everest’s moles looks bigger. Really, much bigger. Every night when he and his brother take a bath, the second mole in Constellation Everest blares out at me and seems just a fraction of a millimeter bigger than it did the night before. It’s no longer beautiful and sweet; it now appears menacing, a harbinger of doom. There are nights when my stomach literally drops in panic at the sight of it. I even went so far as to measure it a few weeks ago so I would have a baseline from which to check my calculations. My fear-mind is absolutely convinced that there’s something wrong. And even as I write this, I have to keep my fear-mind in check, as it just popped up saying, “Well, now that you’ve written about this in your blog, it probably means it’s true. It’s not fear; this is reality.”

Breathe. Wow. Sometimes I can really scare myself. Especially when it comes to the health of my kids.

Okay. I’ve worked enough with the fear-mind to be able to pull myself out of it. When I breathe into my deepest self and connect to God, I know that he’s fine. My fear has attached onto the mole as its latest place to hang its hat. Fear has to hang its hat somewhere; it doesn’t like floating in amorphous space untethered from its space pod. My anxiously engaged clients hang their fear on the questions of, “Am I making a mistake? Do I love him/her enough (or the right way, or at all)?” My pregnant and new motherhood clients hang the fear on, “What if something is wrong with my baby?” My married clients, who haven’t quite taken the leap from attaching their joy and aliveness onto their partner to taking full responsibility for their well-being, hang the fear on, “It would be better with someone else. Someone else would make me feel passionate and happy.” Fear likes the tangible. It also likes to project onto somebody else. This gives us the illusion of control.

What is that we’re so desperately trying to control? Loss. Feeling out of control. The unknown of the future. Taking full responsibility for our well-being. The fear-mind says, “If I’m hyper-vigilent about Everest’s mole, I can control the future. I can avoid unbearable loss. If I let go, something bad will happen.” It’s a lie, of course. It’s pure fantasy and illusion. The truth – the difficult yet ultimately liberating truth – is that the future is out of my hands. The fear-mind of the anxiously engaged says, “If I analyze my partner to death, I can avoid making a mistake. If I walk away from love, which is a risk, I can avoid the possibility of loss.” Again, it’s pure illusion, but fear’s mission is to keep you separate from the risk of love. Love is vulnerable. Fear, as awful as it feels to be in its grip, is safe.

I’ll say it again: Fear distorts reality. Seeing life through the eyes of fear is like walking through a fun house with wavy, distorted mirrors. One of my clients, who has been struggling to remove his negative projection from his wife, spent several months thinking that she was fat. The ironic truth was that she was actually thinner than she had ever been since he met her, but his fear eyes added fifteen pounds to her frame. Isn’t that extraordinary? That’s how powerful fear is.

The antidote to the fear-mind is the faith-mind. The faith-mind says, “I surrender to the future which is out of my hands. I surrender to this moment and to accepting that which I cannot control. I let go of negative thoughts and anything that prevents me from living each moment as fully as possible. I choose to see the reality of now, what is only before my eyes. I choose to see this moment through the eyes of love. What does love see?”

Ask yourself right now. Wherever you are, close your eyes and ask yourself, “What does love see? What is fear trying to protect me from?” And let me know your answers.