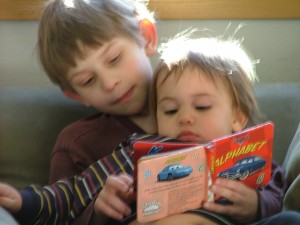 If you’ve been following this blog for a while, you know that my older son, Everest, has been struggling with nighttime fears for almost two years now. Just after he turned five, he started seeing “scary shapes” in the blankets, then shapes on the walls, then a rotating nightly line-up would parade across his brain: spiders, dinosaurs, and every natural and cosmic disaster known and unknown to humankind, from tornadoes to being sucked up by a black hole. His vivid imagination, so clearly an asset to him during the day, was wreaking havoc on his brain each night as he tried to fall asleep.

The topic of fear in all its appearances and variations is near and dear to my heart, both personally and professionally. Throughout my 20s, I battled with my own panic and anxiety: in my early 20s, I stared fear in the face as it lodged into my throat and made it difficult to eat, causing me to dig deep into my relationship with my parents and inviting me (if you can call being dragged into the underworld an invitation) to extricate myself from their influence. In my later 20s, I challenged fear to the death as it tried, with all of its cunning conviction and believable lies, to tear me away from my husband’s side (before he was my husband).

And for the last twelve years I’ve guided my clients through the minefields of their anxious minds. I’ve been witness to every fear-based thought of the anxiously engaged mind imaginable . (Truly, I know that every anxiously engaged or newly married person thinks that their fears are unique, but they aren’t. Fear thinks it’s so sneaky but there are really just a handful of lines it hides up its sleeves, and once you’re on to them, you can break fear down pretty quickly.) I’ve listened to the fears of pregnant women and new mothers. I’ve held the virtual hands of my overseas clients as they battle with the voices of self-doubt and they attempt to call the Gatekeeper onto the mat. My point here is that fear is universal, crossing all lines of age, geography, culture, race, religion, wealth, and gender. Like transitions, it’s the great equalizer, completely unbiased in whom it chooses to lay in its sticky tentacles.

So when my son started feeling anxious at night, I felt confident in my ability to handle it. There are many areas where I fall short as a mother, but I’ve believed that I’m well-equipped to be a solid emotional coach for my kids. So I started with reassuring him, hen tried meditation and other spiritual practices, then taught him to yell “NO!” to the fear, etc etc etc. Nothing worked. Well, something would work for a few nights, and then we would be right back where we started from. The disparate themes eventually coalesced into a single topic: the fear of death. Our bedtime would sound something like this:

“Goodnight, Everest.”
“Goodnight, Mommy.”
Three minutes pass. “I’m scared of death.”
“Okay.” (I’d learned that giving it as little energy as possible worked just as well as anything else – which is to say, not at all.)
Three more minutes pass. “I’m scared of death.”
“Okay.”
One minute later: “I’m so scared, Mommy!”
And so on… for two hours. Either my husband or I would stay with him (I would work on my computer next to him), but things were going from bad to worse. We were losing our patience, on nights that my husband stayed with him he was up later and later trying to finish his work, and we were all losing our minds. Something had to change.

One day, while driving home from town, I said to Everest, “It’s time you fall asleep on your own. It’s not working for Daddy or me to stay with you; in fact, I think it’s making it worse.”

To my surprise, he said, “I think it is, too, Mommy.” In the past when I had suggested falling asleep without us, he would break down from genuine terror. I’ve learned to discern his exaggerated fear from his real fear, and the fear of falling asleep alone was real. But something had shifted and I knew he was ready.

“Okay, so tonight we’ll read books like always, and then say goodnight and let you fall asleep on your own.”

It started out well enough. Everest is a boy of his word, and if he says he’ll do something, he does it. I kissed him goodnight and walked down the hall to my office. Five minutes later he appeared at the door, squinty-eyed and ruffled-hair.

Off he went, and five minutes later… you get the picture. So I said to him, “Everest, how about you fall asleep with Asher instead of alone in our bedroom.”

And ten minutes later, he was asleep.

Same thing the next night.

It’s been over a month and has expressed a fear of death only once.

How do I understand this? For nearly two years, he’s struggled nightly with massive fears of every variety. And now, with a simple change of room and company, he’s fine. I could say that it’s because he feels safer in his small, womb-like room than in our high-ceilinged, spacious room. I could say that the change of place knocked the fear out of place. I could say that he’s growing up and perhaps it’s simply a function of time. And while I’m sure these elements are part of the equation, I think it boils down to one little, four-letter word: love (with a smattering of grace). He loves his brother and he knows his brother loves him unconditionally. Of course, the same is true with me and my husband, but it’s different in that we have an agenda: we want him to go to sleep. Every time he would wiggle and writhe in bed, we would say (with increasing tones of impatience as the night inched on), “Go to sleep, Everest!” Asher accepts Everest’s timing. He doesn’t rush him or snap at him. In fact, many nights when Everest joins us after reading with my husband, the two brothers grab hands and start giggling.

Perhaps the fear will return and perhaps it won’t. But for now, we are all silently rejoicing that this challenging two-year stage of our lives has bellied over into something new and infinitely easier. And we have seen, once again, that love is, indeed, stronger than fear.