February: Listen for the Seed 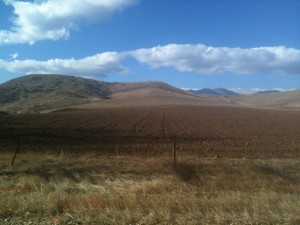 Winter is often an emotionally challenging time. In the darker months with shorter days, psyche invites us to slow down and dip into her underworld where we find unshed tears, unexplored fears, and latent dreams. We can avoid our shadow during the long days of summer with endless fun-filled distractions, but when winter settles in, past the rush and glitter of presents and parties, when the long, long month of January unfolds into February’s silence, there’s no place else to turn but inside. And if we don’t have a steady relationship to our emotional life, what our culture calls depression can easily ensue.

Depression has many meanings, and from a Jungian perspective depression is the soul’s call to sit still and become comfortable with the waiting and nothingness that defines the liminal – or in-between – zone. From the perspective of transitions, just as a newlywed often experiences post-wedding blues as she comes down off the high of her wedding, winter depression is what necessarily follows the high of summer. What goes up must come down, and when we make room for this truth of life we can stop fighting the archetypal energy that is so present during these months and instead breathe into the stillness and perhaps discover the gifts that lay wrapped inside.

When we drop into stillness with reverence and curiosity, we may be surprised at what we find. Yes, there may be wells of grief and tears that need to be shed. There may be loneliness and uncertainty, vulnerability and the fear of the unknown. But there’s also something glimmering underneath the winter snows, a seed of creativity, a moment of possibility that, when given attention, can be nurtured into something new: a poem, a story, a project, a recipe, a dance, a song, a painting. It’s not ready to blossom into the fullness of its manifestation, but the tiny beginning is here, and you can only hear it if you slow down enough to listen.

February is my personal portal month, by which I mean that it’s the month that I’ve had the breakdowns and breakthroughs that have led to my life as I know it today. The seed of me began in February 1971 (conception). In February 1993, I had my first panic attack, which initiated a seven year descent into a hell that would reveal my deepest unfolding. In February 1996, I had my second breakdown, a panic attack so severe that I couldn’t eat properly for the next four years and which opened me to an outpouring of words, ideas, and poetry like I had never known. In February 1999, on the heels of a very difficult January, the seed for my first business, Conscious Weddings, was born. There have been many Februaries where I’ve fallen prey to an anxious thought or an unnamable depression, and just as many when I’ve alighted on the wings of a new idea and flown through the darker months with a secret joy inside, the joy that arises when something new and creative has taken hold.

How much control we have over which direction we follow – anxiety/depression or creativity – is, perhaps, somewhat of a mystery. But I do believe that we can catch the anxious thoughts before they spiral into the hamster wheel of mental addiction and change our train of thought. It could be in that one moment when you harness your mental discipline and say, “No, I will not follow that thought but choose instead to drop down into my heart and sit with the feelings I find there,” that a new thought-direction, something creative instead of destructive, can take hold.

I invite you this February to listen for the seed that wants to gestate. Listen for the slight vibration of “yes” energy that longs to create new life. While my personal history predisposes me to viewing February as a portal month, my sense is that there’s an archetypal energy embedded in February, as it’s the month that precedes spring. The sap is starting to quicken. The animals, while still deep in stillness or slumber, are sensing that the first warm wind is close. The crocuses are centimeters away from poking their purple heads above ground. What is vibrating inside of you? What small creative impulse is taking root, ready to begin its journey down the birth canal of psyche and emerge, one day, as something new and alive that will be birthed into this world?

***
As always when I’m writing about seasonal transitions, if you live in the southern hemisphere feel free to refer to this article in six months!