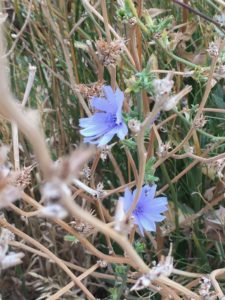 Let’s imagine that there are invisible tracks streaming like ribbons in the ether of psyche. Some of these tracks resonate at a higher vibration and some move at a lower vibration. The tracks of higher vibration carry the feelings that emanate from the source of ourselves: sadness, joy, contentment, fear, uncertainty, disappointment, and, of course, love and gratitude. When the channels are clear, we can easily connect to these source feelings, which allows us to remain in the flow of the river of life without obstruction. The waters move easily and we don’t resist the feelings that come and go, rising and falling like a tide from the pull of the moon. We cry when we’re sad. We laugh when we’re happy. We smile when we’re content. We find grace through uncertainty.

The tracks that carry a lower vibration stem from the part ourselves that we name the ego. The ego is our small-minded self that sees the world in black-and-white terms and attempts to control outcomes by telling us stories designed to convince us to run from the risk of living life fully. Despite the fact that these stories are not rooted in truth, we fall pray to their allure and begin to believe that they’re true. When we don’t learn to question the veracity of ego-based stories, we climb up into the cob-webbed rafters of thought then tumble down the chute of anxiety.

We choose which tracks to tap into and follow. At first, when the mind is untrained, it doesn’t feel like a choice, for we’re wired to follow the path of least resistance, which is the path of the ego. But as we learn to call the ego’s ways onto the mat and bring this part of us into the light of day, we realize that we can, in fact, make a choice about which tracks to breathe into and strengthen. Every time we turn toward the higher tracks, we strengthen that muscle. Every time we follow the lower tracks, we bolster those patterns inside of us. Whatever we water will grow. Wherever we place our attention feeds that fire.

Two of the most powerful ego tracks I see are guilt and regret (and here I’m not talking about the healthy guilt that stems from having a conscience about a true wrongdoing but rather the guilt that stems from ego’s attempts to control). When guilt or regret make repeated appearances in thought processes I know we’re in the realm of ego working its misguided magic as it attempts to pull someone away from the raw feelings of life. Let’s see how this works by looking at a common exchange with many of my clients:

“I’m feeling guilty about that choice I made so many years ago [broke up with partner; left a job; cheated on partner]. If I hadn’t done that, maybe things would have turned out differently,” the client shares.

“Differently how? You’re okay now, you survived that painful period, what would have been different?”

Ahhh… the good-old escape hatch from life trick! Here the ego convinces the person that if they had chosen differently back then, they would be living the anxiety-free life right now. Just as ego likes to convince that the problem is one’s choice of partner as a way to abdicate responsibility for one’s wellness, so ego likes to sift through the past then land on one or two events and say, “If only…. then you would be happy now.” This small, scared part of us – the part that has been culturally entrained to believe that life should feel like Disneyland – has a hard time accepting that life is messy, awkward, painful, wild, and raw. In other words, the ego believes that if it could change the past, it can control the present and even the future. “If only I hadn’t…. I would live happily ever after, ” is the message contained inside regret.

It’s simply not true, and cannot be so. We cannot escape the messiness of life. There’s not a partner in the world or a decision you could have made that would land you at the end of a Hollywood movie or a fairy tale. A containing counter-thought to perseverations of regret is to realize that even if you had chosen differently around the decision that’s tormenting you, you would find something else to regret. For the clients who met young, they regret that they didn’t date more. For those who dated a lot, they regret that they didn’t settle down earlier. It’s the ego’s way to look for loophole. It’s also another manifestation of the grass is always greener syndrome.

Just as intrusive thoughts send you into the endless maze of thought-space, so regret and guilt trap and immobilize you in the stagnant space of the heart. Yes, you feel regret, but that doesn’t mean it’s a fruitful feeling or a source feeling. It’s a second-layer defense mechanism designed to protect you from feeling the raw and more vulnerable feelings that live underneath. In other words, if you’re caught in regret, you won’t have to feel the sadness, remorse, or powerlessness that are embedded inside.

The question to ask when regret or guilt take hold is, “What is this state protecting me from feeling?” And a soothing response to the preservation on regret is, “I did the best I could given who I was and the information I had at that time.” In this loving and compassionate response another element of regret is revealed: the ego’s harsh and unrealistic expectation that we’re supposed to be perfect humans beyond reproach or mistake. When we adopt a compassionate mindset and one that includes learning at is core, we step out of the perfectionist and into the humanist, and in that softer realm the vulnerable feelings can safely emerge. These softer feelings are our gateway to the present moment and to the truth and beauty that live at the core of who we are.