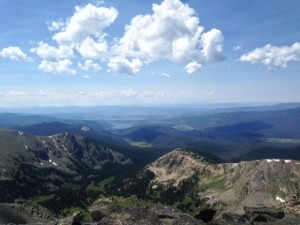 This morning our younger son, who is 13 years, old told me about a headline he read on Apple news about the weather. We’re having a very hot week here in the Denver/Boulder area and the headline caught his eye because it mentioned Denver. I said to him, “Be mindful about what headlines you click on. Next thing you know you’ll be clicking on a headline on a doomsday article about climate change.” This is, of course, not the first time I’ve said this to him.

He said, “Hah! That’s exactly what happened. How did you know?”

“Because the algorithm is predictable. They know how to get you hooked. And it’s our job, especially as sensitive people prone to anxiety, to resist that urge so that we can protect our mental space and not amplify anxiety. Especially for you. You’re only 13 and you don’t need to be carrying the weight of these doomsday headlines on your shoulders.”

But this is true for of us: we must safeguard our mental space like knights, creating a wide moat around the castle of our psyches. How do we engage responsibly with the news, staying informed but not drowning in the 24/7 negative news cycle? How do we balance out negative news with the steady stream of positive news that also exists but doesn’t make it to mainstream news outlets? The following post, which I wrote in 2016 but still very much applies, offers some ideas. I’d love to hear yours in the comments.

We live in uncertain times, and that statement alone can send an anxious-sensitive personality type into a tailspin. But the truth is that we’ve always lived in uncertain times. Because death exists, our lives hang in the balance on this precious and precarious planet. The threats change faces – where once we feared our babies getting eaten by a wild hyena or dying of tuberculosis now we fear climate change and shootings – but the threat is more or less the same as it’s always been. The bottom line is that there are no guarantees for our survival, an awareness that can send those who are attached to the guarantee of safety in the face of change into anxiety.

How we meet that anxiety determines whether we spiral into depression or ignite into action. If we hook into the fear stories, we quickly descend down the spiral slide that ends in flames. But if we can hold the fear without diminishing it, denying it, or placating it, then get off that train of thought and either downshift into the space of an open heart or upshift into action, we can hold our seat during change, whether personal or global.

There are many concrete actions we can take to help hold our seat when exposed to the external challenges inherent to our existence, and one of the most powerful is also the most simple: limiting our exposure to broadcast news. As loving parents to ourselves, we need to be very mindful and disciplined about how much and which types of news we watch. Just as we limit what we share with and show our children, so we must find the balance between staying informed and practicing self-care. What we watch metabolizes into psyche much the same way that what we eat metabolizes into our bodies. In other words, images can be nourishing or damaging, just the way food can be. When we binge on broadcast news, it often has a similar effect as binge-eating a box of donuts: You will feel sick from the overdose of  junk.

It’s essential to realize that mainstream news often presents a one-sided, skewed and sensationalized story. When you open a popular news channel, the headlines you see are fraught with fear and negativity. The news spreads negativity because it has conditioned us to expect negativity. And it breeds more than negativity; it breeds fear, hopelessness and anxiety. If you’re familiar with the role fear plays in your own mind (the powerful storylines we fall prey to when anxiety and intrusive thoughts take hold), you can understand how alluring and addictive fear can be. Like sugar, it’s difficult for the mind to control itself once exposed to negative news. We read an alarming or alluring headline and it’s nearly impossible not to click on the link.

But we could easily be conditioned to thrive on positive news. Can you imagine how differently you would feel if news channels splashed good news across their title pages? What stream of positive energy would surge through your system if you read things like:

If you were to click on that last headline you would read the following from the National Institute on Aging:

The dramatic increase in average life expectancy during the 20th century ranks as one of society’s greatest achievements. Although most babies born in 1900 did not live past age 50, life expectancy at birth now exceeds 83 years in Japan—the current leader—and is at least 81 years in several other countries.

Hallelujah! The human race is doing pretty well. But our achievements in health, science, and psychology generally don’t make headline news. The positive, life-affirming stories exist, somewhere, but you have to really search for them. Why? Because apparently death and sex and violence sell. Or, said more accurately, we’ve been trained, like a flock of sheep, to gravitate toward negative and sensationalized news.

And what if, instead of reading salacious details about the latest celebrity divorce, we read heartening facts about long-term marriages, like:

Billy Crystal and his wife have been married for 46 years! They have two children and four grandchildren!

Tom Hanks and Rita Wilson have been married since 1988 and they’re still happily married!

The media preys on our need for certainty by dangling the vines of uncertainty into our vision constantly. They prey on our tendency toward fear, knowing that fear is addictive and fully aware of how difficult it is not to click and buy when fear is at the helm. While there are certainty very real threats that exist, there is also great hope, acts of kindness, and miracles that occur every single day, often in our midst. We just don’t readily hear about them.

When anxiety takes hold and traps you in its mental torture-chamber, the way out is to turn inward and take stock of the four realms of Self: What is needed physically? How is your emotional realm (when’s the last time you had a good, productive cry)? Are you filling your well by accessing your creative and spiritual channels? And, on the cognitive spoke of the wheel, what are you feeding your mind? What images and information are you ingesting that could be negatively affecting and even causing your anxiety? It’s worth inquiring, and then taking the loving actions – both internally and in the world –  that result in lasting and sustainable change from the inside-out.