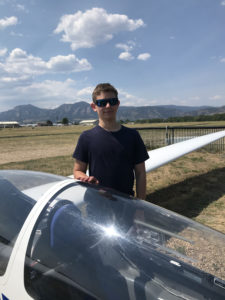 As Victoria and I prepare for our next Gathering Gold episode on winter, I’ve been thinking a lot about contrast, risk, and paradox, and how the highly sensitive person, whose tendency is to stay within the safe bounds of a comfort zone, has to push themselves to take risks so that they continue to grow. What a challenge it is to be biologically risk-averse and yet realize that unless we push ourselves anxiety and intrusive thoughts and all of the ways that fear tries to keep us safe and small will amplify in the cesspool of familiarity!

This was brought home today because our older son, Everest, soloed in a power plane for the first time. He soloed in a glider at fourteen, and thus began his journey through the portal of being a highly sensitive person afraid of the world into someone who has the ecstatic experience of flying as high as he possibly can. And as I’ve written many times, his journey of flight has also been my journey, one that has required me to step outside my own motherhood comfort zone. If I had demanded that he keep his life safe and small, I would have dampened the fire that makes his life worth living. I chose, instead, to walk through the gauntlet of my fears, trusting that on the other side of the fear-walls I would find joy.

The joy that follows the willingness to risk is unparalleled. It’s a joy that I experience in my own life, both in work and love, and now, by proxy, I experience it through being the mother of Everest.

The study in contrasts is this: when we live in the safe and narrow zone, we don’t experience too much fear but we also limit the threshold of joy. Today could have been a regular, calm Sunday, but when we received the text that Everest’s flight instructor was giving him permission to solo, a calm Sunday turned into life at its most alive.

“Let’s go surprise him and watch him land!” Asher suggested. He had had a rough morning with his older brother, but the love between them is stronger; he wanted to support Everest on this momentous day. As soon as he suggested it my husband and I gathered our things and we all drove down to the airport.

Was my heart in my throat as I watched his plane cross the highway right before our very eyes?

Yes. But it was also a miraculous site, one that I’ve envisioned countless times as we’ve driven on that highway into town and watched other pilots curving around to begin their descent into Boulder Airport.

Did anxious brain try to send me catastrophic images about the lake that stands just in front of the runway?

Yes. But I will say that after several years of walking through fear every time Everest flies, my faith in him and his path is stronger, and mostly I felt giddy with excitement. 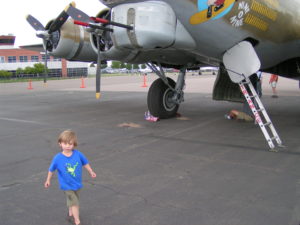 …it was hard to feel anything less than thoroughly thrilled.

We stood at the edge of the runway on this beautiful December day and watched Everest land beautifully, as we knew he would.

And later when we sat on his bed together he told me that he had never felt happier than being in that plane by himself, and that he didn’t want to land. He described the view of the Rocky Mountains, aglow in snow and sunset, and the bluest sky that we can only fully experience in the air. When he’s flying, he’s in his purpose, and that’s often when we feel closest to the divine.

Had he never pushed through the textbook fears that saddled his soul as a highly sensitive boy or had I not pushed through my own fears about letting my young son fly by himself, had we kept our lives safe and small within the comfort zone that anxiety tells us is the best place to be, we would be living a much more muted life.

Whether in love, work, or life in general, if we don’t take risks we will not grow, and when we stop growing we stop feeling fully alive.

You are capable of so much more than your anxiety would like you to believe.

You are capable of great love and great flight.

But you must do the very thing that scares you the most.

You must gather up the grit of hard work and “doing hard things”, as Glennon Doyle says, and step outside into the cold brisk night.

The full moon will be there to guide you.

The bright stars will illuminate the darkness.

You do not have to step into the scary places alone.

Fear is the messenger to guide you toward love.

Smallness is the invitation that leads you toward bigness.

The fear of loss and death and humiliation are the revolving doors that lead to a life fully lived.

What is the risk you would take if you were to hold hands with fear and walk through those doors?