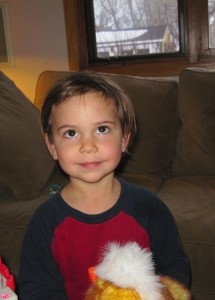 My almost three year old is going through the “terrible twos.” I never fully understood that phrase as our older son seemed to skip over it, but now I get it: Asher is testing his boundaries and experimenting with his sense of power and control in the hopes of learning that he’s not the most powerful person in this house. The way it’s manifesting for him is that he’s trying to control everyone here. I’ll give you some examples:

After the fact, these examples are sort of funny. But in the moment, especially if I don’t have internal space, it’s not funny at all and I feel like bashing my head against a brick wall. But that’s the point: my response to his outbursts or meltdowns is entirely a function of how centered, spacious, and grounded I feel inside my own skin. Everest (our older son) will say, “Is Asher making you mad?” to which I’ll respond, “He’s not making me mad. I’m feeling mad because I’m not handling this very well right now.”

This afternoon, on our way home from a couple of errands in town, Asher started in again with his tyrant impersonation. “Turn on your lights, Mommy!” “No Asher, I’m not going to turn them on.” “TURN THEM ON RIGHT NOW!” In a moment of clarity, I saw the futility of trying to convince him (as I’ve tried in the past) of why I’m not going to turn on the lights. He’s three. It’s not about the lights. If I turn on the lights, he’ll demand something else. Instead of arguing with him or trying to convince him out of his feelings, I said, “Sweetheart, I hear that you really ant me to turn my lights on right now. I really hear how much you want that,” and then I turned on the music and imagined that I was the Dalai Lama. I closed my eyes at the red light and tried to incarnate a vision of serenity, where I could embody peace in the eye of the storm. Asher started screaming louder and then sticking his hands into Everest’s hair. Everest shouted, “STOP IT, ASHER! GET YOUR HANDS OUT OF MY SEAT!” The volume was ear-shattering. The chaos was soul-shattering. In another frame of mind, I probably would have joined in the cacophony and shouted something back (again, a pointless behavior and one that I always regret). But today I was able to retain my equanimity and let the storm pass on through.

And this is how it is with my anxious clients. Anxiety is a like a scared child or a three year old attempting to exert control when it feels out of control. Anxiety is this young part of you waving a red flag, shouting, “Pay attention to me! Listen to me! But don’t let me have too much power by believing what I’m telling you!” If you imagine your anxiety like a child drowning in the river, the loving adult stands on the shore and throws her a lifeline, pulls her out of the current, and holds her close. Or, if the screaming and carrying-on is too much, the loving adult simply walks away with love. But when you believe the antics of the child and give it too much power, you’re essentially jumping into the current and you both go down together. This is what happens when anxiety snowballs into an unmanageable state. You’re arguing with a three year old and it’s argument you’ll never win.

In my younger parenting days, I thought that if a child felt out of control I needed to help him feel in control by giving in to his demands. Now, with the wisdom of hindsight (and being pulled through the wringer of parenting on the front lines), I see the error of my ways. Indulging in a child’s demands actually makes him feel more out of control because he suddenly feels more powerful than his parents and he wonders, “If I’m this small and can make them do whatever I want, who’s in charge here?” This is probably obvious to many parents, but, for a variety of reasons, I had to learn the hard way (with my first son as the guinea pig). Now I know better. I know that when I indulge in his demands, it only leads to more demands. It’s a lose-lose situation for both of us where he usually ends up losing his marbles and I end up losing my temper. But when I hold a firm but loving boundary and allow him to meltdown, scream (and he’s loud; we quite certain that our neighbors at the end of our road can hear him), cry, thrash around the floor, pull on my clothes, and beat his little fists on the couch, he eventually rides it out and finds his equanimity again. It’s not easy for anyone, but it’s the most effective way we’ve found for allowing him to move through his difficult feelings while ultimately creating a sense of safety inside of him.

Afterwards, when he’s lying in my lap staring up at me with his big, brown eyes as I stroke his tear-stained cheeks, I’ll say, “Asher, you can choose for your own body but you can’t choose for someone else’s body. You’re trying to control everyone and it’s doesn’t work. I can wear my clothes and you can wear your pajamas. I can wear a scarf or wear my hair down. I get to choose for my body and you get to choose for your body (for the most part). But you can’t choose for me.” And he’ll say, “I’m not sad anymore, Mommy. I’m happy now.” And he is. The storm has passed and he learned that he can survive big feelings without anything bad happening.

Life doesn’t work very well when there’s no one in charge, both for actual kids and for inner kids. It feels scary, out of control, and shapeless. But when a loving adult steps into the picture and provides healthy boundaries, reassurance, and attention, everything starts to shift. At some point we learn that the attempt to control others or the future is futile, and the only peace comes from accepting this truth and focusing on the immense power we have to shape our own lives in this moment.