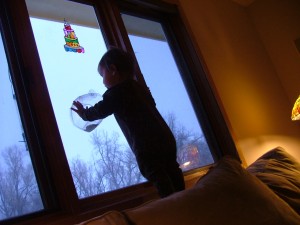 From “The Parent’s Tao Te Ching: A New Interpretation”

If you are always worried

about your children’s safety,

you will bind yourself,

in cords of tension.

If you try to hold them

always close to you,

you will bring yourself,

If you release them

to live their life fully,

and face their death serenely,

your nights will be filled

The more I grasped my children

and my own desires for life,

As I gradually let go of

and welcomed whatever came,

the safer life became for all of us.

To say that it’s hard to let go is a gross understatement. I imagine there are many people who would say that learning to let go is at the heart of every spiritual path: letting go of control, of illusions, of attachments to our ideas of how we think things are “supposed to” unfold, of fantasies, of old paradigms that are no longer serving us. As William Martin says in this piece, when he “gradually let go of plots and plans” he was able to accept life on life’s terms and settled into the safety he had been seeking. So it is with my engaged clients who are struggling to accept a radically different engagement than they had expected or my new mothers who are scratching their heads saying, “This isn’t exactly how I thought motherhood would be.” And so it is with me.

I never would have guessed that one of the aspects of motherhood I would find most challenging is battling the fear images that spontaneously erupt several times a day about something catastrophic happening to one of my kids. I knew I would love my kids with my entire being, but I never suspected that with this love would come such a daily, if not hourly, awareness of the possibility of losing them. During pregnancy, I worried that I would miscarry or, in later trimesters, that my baby would die at childbirth. When Everest was born healthy, I worried that he would stop breathing in the middle of the night. (Both my husband and I fell prey to this fear and were guilty of checking his breathing several times a night.) As Everest grew into a sturdy toddler, I would see images of him falling down the concrete stairs that led up to our house and landing on his head.

I’m sure not all mothers battle these fear images. Given that I’m predisposed to anxiety and have an active imagination, I probably should have expected that this would be one of my challenges as a mother. But two other components contribute to this worry mind: One, I come from a long line of worriers and the gene has definitely been passed down to me; and two, our culture is fear-based and promotes a mentality of fear, worry, and doubt at every turn, from conception to pregnancy and seeping into life far beyond parenthood.

When Everest was about one I shared with my mother how pervasive these images had been for me. She then told me a story about her battle with anxiety-based images: “When you kids were little, every time I left the house I would see an image of the house going up in flames. It filled me with such fear, of course, that I would sometimes turn around and not do whatever it was I needed to do. Finally, after years of this – and other similar fears – I developed a spiritual connection and learned to surrender the fear to a Higher source. It was only then that it started to diminish and I was able to leave without anxiety.”

I’ve had a spiritual connection for as long as I can remember, but being spiritually connected is different from actually practicing “letting go and letting God.” When I read passages like Martin’s piece above, it reminds me that I cannot control the outcome of my kids’ lives. I can’t control whether Asher falls off the couch or not. I cannot control whether or not Everest loses his footing when he’s walking across the slippery rocks in the creek. I can’t control whether or not they get sick. I can keep them as healthy as I can through eating well and as safe as I can through providing them with precautionary measures (a pillow between the couch and coffee table can help), but in the end the outcome of their lives is out of my hands. And when I breathe into that truth, I feel space opening inside me of again. It’s not up to me. The plan is bigger than I am. It’s out of my control.

It’s the risk that accompanies loving with a wide open heart. The risk begins when you embark on the marriage journey and exponentially multiplies with the birth of each child. (The more people you love the greater the probability is of loss.) But with risk comes opportunity and the opportunity here is to practice faith and letting go. I practice throughout the day. The images arise and within a heartbeat I gather them up and release them to God, to Nature, to the Universe. And then I say the prayer that I’ve said every night since Everest’s was born (and now includes Asher):

“Dear God, Thank you for these children and for the privilege of being their mother.

Please protect them and keep them safe from harm.

Please keep Daev and I safe as well.

Please help me be the best mother I can be.