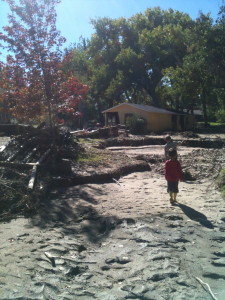 I grew up on a safe, tree-lined street on the West side of Los Angeles. We lived two blocks from the 405 freeway, one block from a strip mall that included a bank, Marie Calendars restaurant, McDonald’s, and Kentucky Fried Chicken, and across a busy street was Pic N’Sav (now Big/Lots), Hughes (now Ralphs), and Thrifty (now Rite-Aid)). Although I felt acutely disconnected from nature, we reveled in the convenience that we could walk to so many stores and restaurants or hop on the freeway in minutes. There were no big trees, no creeks, no open spaces, and, well, no threat of natural disasters. I felt safe. In my bubble world, I didn’t even know that hurricanes, tornadoes, floods, or ice storms existed. Sure, we experienced the occasional earthquake, but I learned to roll with the rumbles and they never caused anxiety.

In the weeks following the recent floods, I found myself living with more uncertainty about our safety than I’ve ever known. Will the creek rise again? Was this truly a rare occurrence – a 500-year flood – or, with the changes in our climate, could these kinds of floods occur more frequently? As my older son said to me a few days after the flood: “Mommy, didn’t you and Daddy say that one of the reasons why we moved to Colorado was because there were no natural disasters here?” Um, yeeees. Looks like Mommy and Daddy didn’t do their research very well. So here we are, living with the reality that nature is infinitely more powerful than we are, and that by continuing to live here we’re living with a certain level of uncertainty.

In my nervous state, I spent some time researching (ie Googling – exactly what I tell my clients to stop doing) “cities with least threat of natural disasters”. While everyone has their opinion, what the “research” revealed is that every place has their threat of danger. And the real truth is that our neighbors two doors down and all around were untouched by the flood. We were hit hard and others were spared. The same phenomena occurs with tornadoes, ice storms, and earthquakes. Had we purchased the blue Victorian house on the corner instead of our yellow house on the creek we wouldn’t have experienced any damage. We would still be living with our illusion of certainty and safety.

Because here’s the truth about this statement – “by continuing to live here we’re living with a certain level of uncertainty”: “Here” means planet Earth. By living on Earth we’re living with uncertainty. As I often teach my clients who are struggling with the need for certainty that they’re making the “right” choice in terms of their relationship partner, the work is to become more comfortable with uncertainty. For just as there isn’t one “right” partner, there isn’t a place in the world that could be considered completely safe from natural disasters or another type of threat to safety (burglary, fire, etc). To live is to risk. To love is to risk. We can allow fear to direct our choices  – as I was doing when I indulged in the part of my mind that wanted to move away – or we can learn to work with the fear itself.

Sometimes working with fear is a matter of reframing. In a fearful state one night following the flood, I wrote to my husband, “I hate this. It makes me want to move away. But I don’t know if there’s any truly safe place.” To which he responded, “The way I think of this is that Earth is a dynamic and living planet, not dead like the moon, or mostly dead like Mars. This is part of being on a living planet…not a dangerous planet, just alive.” God, I love this man. His words helped me contextualize and reframe, and in that instant I reconnected to the aliveness of not only our planet, but also of our little wild spot here on the creek.

In my truest self, I don’t want to move away. I’m deeply in love with our land and with the water that flows through it. I have a profound relationship with the giant Cottonwoods and slender Aspen trees, with each blade of grass that lies submerged between thick layers of mud but will poke through again in the Spring, with the creek who has endured her own trauma and now meanders on a new path, with the birds and insects and wildlife who flock to our land by the water. If I left them, a part of me would wilt, as they are some of my most meaningful friends. Will we build measures of protection when we rebuild our land, like rock walls behind our barn and floodgates at the back of our property? Probably. But we also recognize that living with aliveness, living in nature, assumes an element of risk. Living on Earth assumes an element of risk. True safety comes from within, the refuge of an internal “okayness” that isn’t dependent on externals to create the illusion of safety.

In those early weeks, when fear reigned and uncertainty loomed, I drank deeply from my own medicine and practiced the teachings I bring to my clients every day. I knew it was time to widen my tolerance for uncertainty, to make friends with that most uncomfortable feeling that snaked up my body and into my thoughts and tried to convince me to run. I breathed into the uncertainty. I breathed into the grief that coursed like an underground creek beneath the need for certainty; when I let myself grieve, I found my solid ground. I turned to my husband for wisdom and containment. I accessed my own imaginary guides, like the wise woman who lives on the edge of the creek and opens her arms wide to embrace me in her ancient comfort.

After years of coasting along and enjoying the eddy of a calm, secure life, those first several weeks were a period of growth. It hurt and it was scary at times, but it also opened me to a space of divine connection and gratitude that is more elusive during the eddies. And through that enduring connection, through the love of the spirit in this land and my commitment to honoring my relationship to it, the need for certainty diminished and my place of internal safety widened.

Might we experience another flood if we remain here? We might. But I’m no longer living with that fear, only the gratitude and love that led us here, that nourish us, and that we have the privilege of giving back as we restore, repair, and renew both ourselves and the world around us.