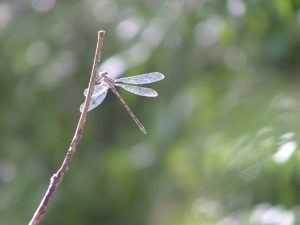 Life is a series of micro-moments. Most of the time, we’re floating along in the fast-paced current without self-reflection. But inevitably, at some point, we will get snagged on a branch of anxiety or intrusive thoughts, an uncomfortable feeling, an illness, an argument with a loved one, or a season of depression. The habitual responses to these gifts-disguised-as-snags are to protect in some way: to attack outwardly through blame or withdraw into stony silence. We also gravitate toward habitual mental defenses as a way to protect against the soft feelings that live in the underbelly of the heart: we worry, we ruminate, we distract, we check, we watch television, we surf the internet, we shop.

We aren’t taught this anywhere in our early life, but the conscious path is largely about slowing down those micro-moments so that we can observe our habitual response, ask if it’s a response that serves us, and, if not, choose a different, more loving way.

Let’s bring this out of the abstract and into the concrete with a couple of examples:

A few weeks ago, after a lovely day with our extended family, my son and I got into the car to run a quick errand. Within a few minutes of driving he said, “When are we going to see H [his good friend]?” I could hear the twinge of anxiety in his voice and wondered about the timing of asking when we’re going to see his friend just after having a full day with family.

“Are you feeling sad that our family left?” I asked.

“And maybe a little empty?”

“That makes sense. There’s so much fullness and life in the house when they’re here and I know how much you love playing with your cousin. Instead of planning the next playdate, do you want to see if we can be with those feelings and breathe into them?”

He nodded, and I could see that my words were landing in a soft and vulnerable place inside of him. We spent the next few minutes in silence, breathing into the feelings – the sadness and the emptiness – until a visible light filled his face.

Let’s review what happened there, as these steps are the same we would take with our own adult selves when a difficult feeling quickly morphs into an escape hatch defense: I validated his experience (there’s so much fullness when they’re here), identified the defense mechanism (planning the next playdate), named the feelings (sadness and loneliness), then offered a way to be with the feelings in the moment (breathe into them).

Here’s another example (shared with permission):

I had a session with a client last week who, like many of you, struggles with incessant doubt about her relationship. She is a highly conscious, well-read, and poetic person, and she’s a bit confounded as to why she’s still struggling. As she says, “I know all of the information. I’m just not sure why I’m still stuck.” We spent the majority of the session slowing down what happens when an intrusive thought shoots an arrow so that we could arrive at another, and deeper, level of what’s being asked of her. The conversation went like this:

“The nagging voice interjects several times a day,” she said.

“It says: This relationship cannot make you happy. It won’t allow you to grow spiritually. It’s never going to work out. Or something along those lines.”

“And how do you respond?”

“I meet it with my adult self and say something like, ‘It’s not his job to make you happy. My spiritual growth is my responsibility,” etc. Then it calms down.”

“So you meet it cognitively with accurate information about relationships and the voice quiets down.”

“Yes. But then all of the feelings come up.”

“Helplessness, loneliness, fear, confusion, anxiety. I could go on and on.”

“And how do you meet those feelings?”

“I don’t. I ignore them. Or I judge them. I think something like, ‘What’s wrong with you? You’re so sensitive. You should be over this by now. Just deal with it.'”

“Well, therein lies the stuck point: you’re meeting the feelings with judgement instead of compassion. As long as that’s your response to difficult feelings, you’re going to remain stuck,” I said.

We then talked about the inherited mother-line imprint that’s been handed down for generations that says, “You’re too much. Your feelings aren’t okay. I can’t handle you.” Like so many of my sensitive clients, she struggled as a baby with digestive issues and was probably in a lot of physical pain. And, as babies are wont to do, she expressed her pain and discomfort without hesitation. My client, again like so many of my clients, has been told the story that she was a “difficult” baby who “couldn’t be soothed” and “no matter what we tried nothing made you happy.” So, of course, she absorbed the belief system that she’s too much and nothing can make her happy. It’s been drip-fed down the mother-line so that now it’s the commentary that runs across the bottom of the screen of her psyche.

By the way, what “difficult” baby really means is, “I lacked the skills to know how to soothe you. You were actually perfect; it was me, because of my own trauma and lack of adequate mothering, that was deficient.”

For her, as for so many, the work is to slow down into that one moment when the feelings are unleashed from within the casing of the intrusive thought and notice her habitual response so that she can choose another, more loving response. I encouraged her to imagine a soft, nurturing mother meeting those feelings with gentleness and simply breathing into them. She doesn’t have to name the feelings or even understand them (as quite often feelings are beyond story-line and erupt from unconscious and preverbal layers of psyche). She simply needs to be with them in a gentle and non-judgmental way.

If it seems like a lot of work to slow down life and zoom in on these micro-moments, that’s because it is. As it’s rarely modeled by our caregivers, we don’t usually learn it at home. As we venture out into the world, starting with school and continuing into the workplace, we’re still not taught how to slow down enough to catch the moments that set us off-course. Eventually we realize that the auto-pilot model of moving through life doesn’t work very well, so we take steps to learn another way. We learn to turn inward. We learn to listen to the signposts and messages delivered from our inner world, often in the form of anxiety, somatic symptoms and intrusive thoughts. We learn to develop and then grow the loving inner mother who moves to a slower rhythm than the common culture, slow enough to stop in those micro-moments and hold the wisdom-self in her arms as she gently says, “I’m here. You’re okay. I’ve got you.” This is how we heal: step-by-step, moment-by-moment.