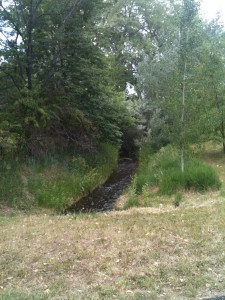 There are certain parenting moments that bring you to your knees with regret and despair. These are the times when you look at yourself from above and think, “I can’t believe I’m saying this to my child,” and later, curled in the sheets, you sink into the well of remorse and cry yourself to sleep. These are humbling moments, unbearably painful moments, and, in the end, the moments that break us open to a new level of learning about ourselves and shine the unwavering light of consciousness on the places that need attention.

And then there are moments when we know we’re doing something very good for our child. These are moments when we’re in the tao of parenting, sitting centered in the saddle where nothing – not the screaming, not the tantrums, not the accusations – can knock us off balance. These, too, are learning moments, where the beautiful light of consciousness shines into the places that have grown and can continue to be watered.

I had one such moment a few days ago. We’ve been struggling in the throes of threes with our little guy. My dear friend, who also has a three year old, describes this stage from the child’s perspective as “a new awareness, like a veil falls away, and the world is sharp after that.” My son is clearly struggling to make sense of his new world, his new awareness, and as he tumbles around in his exquisitely sensitive out-of-control awareness, he’s trying to take me down with him. And down I’ve gone. Down, down, down, until, at the bottom of the well, I finally surrendered and then looked around for the coins of clarity that would help me find my way back out

After two in-depth conversations with my wise-women, I woke up Sunday morning clear on how to handle Asher’s attempts at controlling his inner world by controlling me. He’s perseverated on one theme for several weeks now and, because it’s been easier not to fight him, I’ve gone along with his demands. Specifically, he’s demanded that I wear my hair back. Sound ridiculous? It is! But in his little mind, if he could control my hair, perhaps he could control the maelstrom of emotions, thoughts, and sensations turbulently bursting and birthing inside him. But I finally reached my threshold and decided that, while I’m okay with supporting him in places that are clearly about his fear – like his refusal to go swimming – I’m not okay with allowing him to control me.

So when we woke up Sunday morning I said to him, “Asher, I know you really like it when I wear my hair back, but I don’t always want to put it back. Sometimes I like it down and sometimes I like it on top of my head, especially when it’s hot. So I know that you might not like this, but I’m going to wear my hair however I want. And you can have any feeling you need to have about that.”

“Okay, Mommy. It’s just that when I’m sad, I like you to wear your hair back.”

This was an extraordinarily insightful comment, and one that corroborates with my instinct that his attempts at controlling me are his way of trying to avoid his difficult feelings.

“I know, sweetheart. But I also know that you can handle your sad feelings without trying to control my hair.”

Hmmm, that’s it? We snuggled for a few minutes, and then he said, “Mommy, I’m sad. Could you please put your hair back?”

“No, Asher, I’m not going to put my hair back. Remember you can choose for your own body but you can’t control other people’s bodies.”

And that’s all she wrote. He went from zero to sixty and screamed at the top of his lungs. He screamed and cried and rolled around and screamed some more. At some point, my older son came in and lied down next to us. I put my arm on him to reassure him that everything was okay. He smiled, somehow sensing that, even though the feelings were loud, Asher was being contained by my firm but loving boundary.

Asher screamed for a good twenty minutes, but because I was prepared for it, I held my seat with love. I touched him occasionally to let him know that I was there, not going anywhere. My internal knowing said that he could handle any feeling but what he couldn’t handle was the threat of or actual abandonment. In other words, I wouldn’t say to him, “If you keep screaming, I’m going to leave the room.” What I did say was, “You can feel anything you want. I’m not going anywhere. And I know you’ll move through this when you’re done.” It was like I could sense a quantifiable amount of frustration inside of him that needed to come out. When he expressed enough of it for the time being, he could come back to his center and move on.

And that’s exactly what he did. As quickly as it started, the screaming stopped and he said, “Okay, let’s go downstairs.” We went down, had breakfast, and went out onto the deck to play. I felt happy inside, clear for the first time in weeks about my parenting direction. And as I leaned back on the couch enjoying the lovely morning, I heard Asher telling himself a story:

“One day, Asher woke up and said, ‘Mommy, put your hair back!’ Mommy said no and Asher drove in his car to Whole Foods. He wasn’t scared. He drove to a cliff and looked out and said, ‘How beautiful!’ Then he drove home.” I’m assuming this was his way of processing what happened and that the storytelling helped him to arrive at a greater level of acceptance about the new terms.

Something my therapist said in my twenties has been popping into consciousness lately: “Most parents have no tolerance for their kids’ frustration, so the frustration is shut down, goes underground and comes out as anxiety or depression later in life.” Frustration. I’m not exactly sure why Asher is frustrated, but I have a feeling it’s connected to the inherently out-of-control experience of learning to be human, the realization that the world is so much bigger than he can control or even make sense of, the daily frustrations of being little in a world where everyone is big, of his words not always being understood, of having a big brother that adores him but isn’t always kind to him, and having parents that can meet his needs but can’t meet all of his desires. The veil of being two years old has fallen away, and in the searingly clear awareness of three, he’s desperately trying to avoid the big feelings.

Can I teach him that he can handle big feelings? Can I teach him that he can’t control others as a way to try to manage what’s happening inside of him? Knowing that having a clear and courageous relationship to one’s most painful feelings is one of the inroads to a fulfilling and joyous life, it is my deepest prayer that, if I teach him nothing else, I teach him this: that he can handle big feelings and not feel afraid of them, that feelings are fleeting, and that when he dives into the tumultuous waves of his emotional life while holding onto the tether of a loving adult – now me and one day his own inner parent – he will always, always emerge on the other side with more clarity, strength, resilience, flexibility, and joy than ever before.