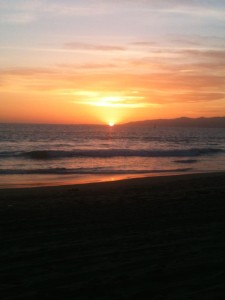 One of the most damaging spokes of the anxiety wheel is the belief that you’re the only one who struggles with the particular thoughts and feelings that dominate your inner world. In our “How are you? I’m fine” culture that worships the happy face and denies a truthful telling of what we’re really feeling beneath the surface, it’s easy to believe that you’re the only one who struggles. This is why when you do happen upon information or people who share the shadow, a significant portion of anxiety is lifted.

The truth is that we are all interconnected in ways that we don’t always consciously realize. The isolation that has overtaken modern life belies the reality of our interconnectedness and supports the ego’s mindset of separateness, which then causes us to tumble down the rabbit hole of shame. But when we have a veil-lifting experience – one that reminds us of our shared humanity – we know deep in our cells that everything we’ve ever thought or felt has been thought or felt by countless others. Then we can exhale. And riding on the exhale of support we can approach the thoughts and feelings without the film of shame in the way.

There are moments when an awareness of our shared humanity flows into me like a warm bath, moments like a few days ago when we arrived back in Denver airport after a week away and stepped off the train to curve with the group of people onto the escalator. Surrounded by my own family, I looked around to see the other people with whom we shared this moment  – singles, couples, families, elderly people, babies – all of us in one mass like a giant, multi-colored serpent dancing its way through life. I don’t know why it hit me in this moment, but for some reason the veil of separateness was lifted and I smiled from the body-awareness, beyond any mental construction, into the experience of our oneness.

In these moments, I think of my friend Carrie saying to her clients, “We’re all in this together.” Carrie and I met in graduate school twenty years ago and share as many mindsets and philosophies as two people could possibly share, one of which is the commitment NOT to support an illusion among our clients and readers that we, in the position of guide, have it all worked out. In other words, we both believe that it’s critically important for the people with whom we are privileged enough to interact know that we struggle, that we slip into anxiety from time to time, that we have arguments with our husbands and kids and friends and family members, that, in essence, we’re profoundly human and, thus, imperfect, which means we have blind spots and shadows just like everyone else.

I think also of one of my venerable, virtual teachers, the American-Buddhist nun Pema Chodron, who shares candidly in her books and lectures about her struggles with envy, anxiety, and panic. As she writes in “Living Beautifully with Uncertainty and Change“:

“Our challenge is to train in smiling at groundlessness, smiling at fear. I’ve had years of training at this because I get panic attacks. As anyone who has experienced panic attack knows, that feeling of terror can arise out of nowhere. For me it often comes in the middle of the night, when I’m especially vulnerable. But over the years I’ve trained myself to relax into that heart-stopping, mind-stopping feeling. My first reaction is always to grasp with fright. But Chogyam Trungpa used to gasp like that when we was describing how to recognize awakened mind. So now, whenever a panic attack comes and I gasp, I picture Chogyam Trungpa’s face and think of him hasping as she talked about awakened mind. Then the energy of panic passes through me.” (p. 93)

It can happen anywhere, this awareness of oneness. Last week in a yoga class I was having a particularly hard time with my thoughts and my body. The mantras -“This is too hard. I’m too tired. Yoga is hard enough on a full night’s sleep but it’s impossible on broken sleep. I can’t do this. I should just leave” – pounded through my mind for the first half hour of the class. Then I opened my eyes and noticed a woman standing in the middle of the room. She had a beautiful practice, a beautiful bendy-yoga body, and seemed to be in complete flow with her body and mind. In times past I may have felt envious of her practice or her body, but on that day something inside of me opened and I only felt awe. And then something in me loosened. A tightness unhooked. And suddenly the class got a little bit easier. As I connected to her practice from a place of inspiration, I felt myself riding on the collective energy born of the multitude of bodies in the room, as if we were all particles of a single breath, spirals of light from a single center. The image of geese flying in formation came to mind, how the downdraft from the lead goose helps the ones in the back, and when the lead goose tires she trades positions with the others.

For this class, the woman in the center of the room was the lead goose. Each time I glanced over at her strong, bendy body, my awe and gratitude expanded and my own practice moved with greater flow. She was carrying the archetype of yogini for that particular class, and I silently thanked her for her devotion to her practice. I was also aware that, while for this class she was holding the role of guide, somewhere else she could be in the role of novice. We all carry different roles in different circumstances: sometimes teacher, sometimes student, sometimes we shine and sometimes we need to take a quieter role. We are all limbs of one tree trunk. We are one body.

When we remember our shared humanity we have more compassion for our daily experiences. Over and over again we learn that that work isn’t to be free of painful feelings and difficult thoughts but to learn to move toward them with compassion and curiosity. Enlightenment isn’t an unblemished state of happiness and peace but the ability to ride life’s currents with increasingly more levels of tolerance and less resistance. In this sense, enlightenment isn’t something “up there”, a goal at which we will arrive, but an ever-changing process of stepping into and out of the flow of life. When we understand this, we cease berating ourselves for struggling and start to make more peace with the struggles themselves. And when we make peace with the struggles, recognizing that embedded inside the anxiety and intrusive thoughts and obsessions live our golden treasures, we find freedom.