I just spoke to a client who needed some reassurance that she wasn’t making a mistake in marrying her loving, caring, passionate, open, honest partner with whom she shares core values and is aligned in terms of life goals. Given that list of qualities about her clearly healthy relationship, how could this be a mistake? It couldn’t, but in a culture that says “doubt means don’t”, any valid questioning and expression of healthy fears about making the biggest commitment of one’s life are immediately interpreted as signs of a mistake.

For the anxious mind, doubt is inevitable. For the mind that examines every decision under the highest resolution microscope possible, that asks important questions like, “How do I know that I love him? What is real love anyway? How do I know that we’re not going too end up like my parents or as part of the 50% divorce statistic?”, doubt is actually another word for fear. And since fear’s entire mission in life is to keep you protected from the possibility of getting hurt, it will naturally make a strong appearance as soon as the concept of marriage becomes a reality. That’s when fear – or doubt – shows up and tries to get you to run for the hills.

Should you listen? In the wise words of my client speaking about every area of her life (not just engagement anxiety), “If I listened to doubt, I would never get out of bed in the morning.” In other words, doubt is a normal part of the terrain of the anxious mind. When you learn to deal with anxiety effectively, you hear fear’s lines but you don’t heed its advice; it will always shoot its darts into your brain but you learn not to take the poison. So to buy into the cultural lie that “doubt means don’t”, whether you’re getting married or starting a new job, is like laying yourself prostrate at fear’s feet and saying, “You win. You rule my life.” And, as my client said, you would never get out bed. You live without risk in the safety of a carefully controlled box. You’re alive, but you’re not really living.

The problem arises when we equate doubt with instinct instead of with fear. If you’re walking in a forest and you have an instinct that a tiger is lurking around the next tree, listen to it! But in this case, instinct is more likely an acute awareness of the here-and-now environment: you’re hearing a far-off, unfamiliar sound, you’re seeing a slight movement in the leaves of the tree, you vaguely smell an unfamiliar smell. Being a highly sensitive person, your senses are more attuned to what’s happening around you than other people’s. But the main point is that you’re attuning to something dangerous that’s present right now. The modern-day anxious mind perseverates on “what if” thoughts, which are based in an imagined negative future and , thus, are unanswerable. My point is that you should listen to your fear/doubt if there’s something right in front of your that’s dangerous or scary – like a partner that has an addiction, abuse, trust, or control issue – but not if it’s hell-bent on convincing you that marrying a loving, caring man is a mistake.

It can be difficult to challenge a dominant message like “doubt means don’t”, especially when the stakes are so high and when many of our highly revered role-models espouse this belief. One of the most poignant moments of my second appearance on Oprah (1/28/03) was when she said, “What I have found is in many cases – and everyone has to judge this for themselves so when I say it it’s not a blanket statement, but this has been very helpful to me: Doubt means don’t.”

I gathered up my courage and then challenged her by saying, “I just want to say that doubt doesn’t always mean don’t. Most people if they’re honest will doubt at some point in their engagement because it’s such a big decision and people will almost always think, ‘Is there someone better out there?’ or “Am I sure I want to commit forever?'” 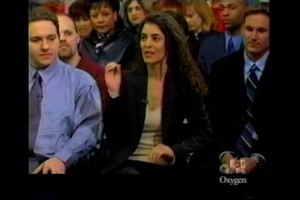 To which she responded, “Well, that’s why I say it’s not blanket.”

After a bit of a back and forth, it turns out that we were saying the same thing using slightly different language. Oprah wasn’t saying that if you’re feeling doubt that you should call the whole thing off; she was saying that doubt is a sign to slow down and turn inward so that you can ask important questions and dig down to the root of your doubt. Is it stemming from natural fear/terror about getting married and making one of the biggest commitments of your life? Is the doubt a signal that you’re sinking into the underworld of grief, confusion, and vulnerability that defines transitions and projecting these difficult feelings onto your partner and your decision to marry because you don’t know that it’s normal to feel anything less than pure bliss during your engagement? Or is it an indication that you’re marrying for the wrong reasons (because you’re trying to please others) or that there’s a real, glaring, red-flag in the relationship that needs your attention?

Here’s the end of the conversation about doubt. And just when I thought we were going to move on to a new topic, a brave woman from the audience spoke up and shared how her struggle with marriage-doubt resolved itself:

And there you have it, friends: Doubt does not always mean don’t. Doubt means slow down and listen to something important that’s trying to get your attention. Doubt means, “This is a huge decision and you need to examine it from every angle, and once you’ve determined that it’s a solid choice, you need to take the leap because, if you’re prone to anxiety, you’ll never arrive at 100% certainty (about anything).” And as this woman on Oprah shared, doubt can be the doorway into transformation, not just for yourself but for your marriage: “That transformation with God led us to a very intimate, loving relationship.” (Love that).

For everyone who says, “I’m 100% certain that I’m marrying the right person” and ends up with a great marriage, you can find someone who struggled with engagement or newlywed anxiety and ended up with a great marriage as well. Likewise, there are thousands, if not millions, of people who marry each year armored with 100% certainty and end up divorced one or ten years later. And there are people who get married despite the doubt and end up divorced. The bottom line? How you feel about your partner and your decision to marry isn’t an accurate litmus test for whether or not your marriage will work out! Marriage is a risk and a leap of faith and there are simply no guarantees for its success.

So if the decision to marry isn’t based on a feeling or a knowing, how do you know if you’re making a wise and loving choice? You assess your relationship from an objective perspective and ask yourself: Do we basically work as a couple? Are we good friends? When our hearts are open, do we connect? Do we support each other’s dreams and passions? Are there any glaring red-flag issues (addictions, gross misalignment of core values, unresolved control issues)? Do I like my partner’s essence – that place beyond personality quarks and human imperfections? Would a matchmaker pair us together? And then you grab your partner’s hand and leap off the cliffs of your wedding day, trusting that a thousand invisible hands (and some visible ones) will open like a parachute to support you on your lifelong journey of learning about love.