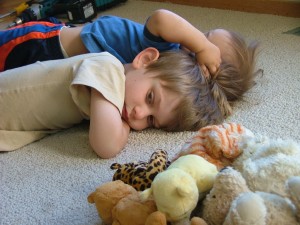 In the middle of our ninth reading of Charlotte’s Web, Everest decided to become a vegetarian. Perhaps it’s because he just turned six and he’s more attuned to himself as a separate individual or perhaps it’s due to another cause, but whatever the reason when we read the section about Wilbur being turned into bacon something clicked in for Everest. We were sitting peacefully together, side by side on the bed as we do every night, and the next thing I knew he was hiding under the covers, crying. I asked what happened. He wouldn’t tell me. I asked if it made him sad to learn about where some of our food comes from, and he said yes. He told me he doesn’t want to eat chicken, turkey, or beef anymore. I said that’s fine, we’ll find other things for him to eat.

I have to admit, I didn’t really believe that he would stick to his guns and stop eating meat. Although he’s never been a big fan of chicken, he’s gone through stages when he’s almost inhaled beef hot dogs three at a time. Would he really give up hot dogs? The next morning we had chicken sausage at breakfast and he refused it. At lunch, I offered him hot dogs and he said no. At dinner, my husband made lemon chicken which Everest usually enjoys and he turned it away. He’d made his decision and that was that.

I was proud of his decision and, as always, nurtured the exquisite sensitivity that inspired the choice. My only hesitation about supporting him was… what the heck would I feed him now? I’m definitely not a vegetarian (although a part of  me wishes I could be), and many of our meals include a meat or poultry source. After a few days of pathetic meals for Everest, I put out the call for support to my vegetarian friends and asked what they feed their kids. My friend, Sarah, in Los Angeles, wrote back with dozens of great ideas and over the next several days I compiled my new list of “What to feed Everest”, broken down into breakfast, lunch, dinner, and snacks. I’m happy to say that now, two weeks into his vegetarianism, he’s probably eating healthier than ever.

In my liminal zone, between Everest eating meat and not eating meat, I was truly as a loss about what to feed him. How would I make sure he ate enough protein? How would I find the energy to make two separate meals at dinnertime? I experienced all of the characteristic feelings that define the liminal stage: disoriented, anxious, doubtful, confused. Of course, the feelings were on a smaller scaler compared to the largeness of emotions that catapult people to my sites and counseling sessions during the major life transitions, but they were real nevertheless. I had become attached to him eating meat and was struggling with letting go and finding our new way with food.

It reminded me of a time when Everest was about three months old when he finally started to take regular naps. For three days in a row, he took three, one hour naps, just like The Books said he should. Finally, I thought, we’ve arrived at some stability in the sleep department. Hah! That was probably the last time Everest displayed any consistency around sleep for three days in a row. I was so attached to his apparent stability that I cancelled Thanksgiving plans so as not to disrupt “the schedule,” only to find that the very next day, his naps were all over the place again.

It certainly wasn’t the first time I found myself attached to an easy stage and thinking, “At last, we’ve arrived.” It’s almost inevitable in the life of a parent that as soon as you settle into a comfortable rhythm and declare it aloud to one of your friends, the very next day you’ll find yourself in chaos again. As our children transition through their natural cycles around eating, sleeping, teething, socializing and the myriad other ways that they grow, so we are asked to let go of the ways in which we’re been attached to the current cycle. It’s the reason why so many of say that parenting is a spiritual path, for just as our children are constantly growing and changing, so we must grow, change, and always let go right along with them.