Perfection and The Fear of Failure 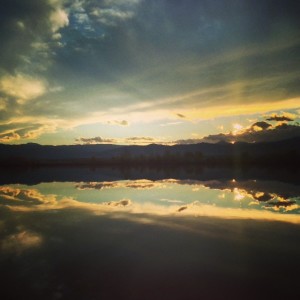 “It’s better to make a mistake with the full force of your being than to carefully avoid mistakes with a trembling spirit.”

– Dan Millman, The Way of the Peaceful Warrior

When I was in graduate school many ago, my classmates would often ask me how I was able to write papers so quickly and effortlessly. Many of them were perfectionists (like myself and many of you), and they struggled with writer’s block when faced with a blank piece of paper. When I was asked this question, it prompted me to think about how I was able to overcome my own perfectionism, and I realized that the breakthrough moment had come in high school when, in some moment of grace, I realized that if I gave myself full permission to write the worst paper I had ever written it freed me to express myself. From that point on, every time I had a writing assignment I would say, often out loud, “You can write the worst paper you’ve ever written.” Like a miracle, the creative floodgates would open and the words would effortlessly tumble out.

This principle came up in more recent years when I was struggling with early motherhood sleep deprivation. When the time would roll around for my weekly yoga class, I would inevitably tell my husband that I was just too tired to go. And he would inevitably say something like, “Even if you stay in child’s pose the entire class, it’s better to go than not go.” He was right. As soon as I stepped onto my mat, while giving myself full permission to stay in child’s pose, I would find some reservoir of energy and would be able to do most of the class.

I never did write the worst paper and I have never spent the entire class in child’s pose. When we give ourselves permission to fail, we never actually do. When we agree with the part of us that wants to hold us back, we diminish its power.

Another way of saying “give ourselves permission to fail” is to talk about the character of resistance. Resistance is the voice that tries to prevent you from doing anything new, from taking a risk, from being vulnerable, from putting your creative or innovative self into the world. It’s the voice that says, “It’s all been done before. Who do you think you are? You’re going to fail, just like you always do. What if you look like a complete idiot?” It’s the part that cares deeply about what other people think and tries to protect you from criticism at all costs.

It’s also the part of us that is connected to fundamental laziness. It’s the part that would rather surf the internet than work on your creative project, the part that would rather fritter away time on Twitter and space out on Facebook than clean the house, the part that would rather zone out with food than do the inner work you need to do to deal with your anxiety, in your relationship or otherwise. I noticed this part a few moments ago before working on this blog post: the wall of resistance that doesn’t want to sit down and work, the part that can think of a hundred other things I have to do rather than take the risk of expressing my thoughts and communicating my message. The voice is very quiet now since I’ve been working with it for years, but it’s still there and it sounds something like, “What if you can’t express what you’re trying to communicate? What if the words are blocked? This is too hard. I’ll do it later.” I hear it but I don’t listen, and I sit down to write anyway. And every time I push through the resistance I connect to my creative flow, which is connected to my joy and the complete gratitude I feel for being able to do this work and share it with my audience, and I wonder why I resisted at all. Why do I forget every time how fun this is?!?

As far as I know, there’s only one way to overcome the fear of failure, perfectionism, and resistance, and that’s to make friends with it in some way. It’s allowing it to join us our journey, whether by saying, “I’m going to write but I’m going to give myself complete permission to fail” or seeing what happens when you honor the resistance by saying, “Okay, you win. I’m going to sit here and zone out instead of wash the dishes.” In this way, we disarm resistance and the voices of criticism and let them know that not only do we hear them, but we recognize that in some paradoxical way they’re an essential part of our journey. Like the baby being born needs to push up against the walls of the uterus in order to enter the world, perhaps we, too, need to push up against the walls of these shadow parts in order to birth something new.

Rabbi Naomi Levy speaks to this in her book, “Einstein and the Rabbi”. She’s talking to a woman about her resistance to writing a screenplay, and she introduces the woman to the Jewish concept of the Yetzer: this part of us that “seeks to divert us from uniting our highest intentions with our actions” and yet is also an engine that drives us. “That’s the paradox of the Yetzer,” she writes. “We need it in order to survive, but if we leave it unchecked it will destroy us, and everyone around is. The Yetzer is a foe, and we can’t live without it.”

She continues: “Here is the only way I know to disarm the Yetzer and the roadblocks it seeks to send your way. Instead of demonizing it, welcome the Yetzer to join you on the path. Partner with it, but tame it. Let it know who is in charge. As the rabbis teach, the Yetzer’s desire is to rule over you, but you must learn to rule over it. Take charge with humility, love, respect, and without judgement. Show the Yetzer that you recognize it. Say to it, “Come with me on this journey. I can’t fulfill my mission without you.” p. 220

Any time you move toward your higher potential, this part of you is awakened. Any time you move toward a loving partnership or a new business idea, for example, this part of you will rear up with a vengeance. Any time you approach inner work, this part of you will attempt to divert you. In order to move forward in our lives, we must learn to befriend resistance and move through our fear of failure. Befriending means that we make this part of us conscious so that we can acknowledge its presence, then proactively choose against it. If we don’t make this process conscious, we will default to our habitual patterns and the past of least resistance, which is, ironically, the path that puts resistance in the driver’s seat. Fundamental laziness will take over, as will the negative voices that are trying to protect us from taking risks.

How would you life be different if you could make friends with resistance, if you could learn how to partner with it and tame it so that it doesn’t rule your life? What if we could approach all of life with the same mindset, to know not only that we will make mistakes, we will stumble and fall, we will experience doubt and uncertainly in our relationships and in our biggest choices but to give ourselves full permission to fail? What would it be like to take resistance by the hand and give it some control while not allowing it to control our lives?

If you’re ready to learn how to do this – if you’re ready to break through your stuck places and move through your paralysis –  please join me for my next round of Trust Yourself: A 30 day program to help you overcome your fear of failure, caring what others think, perfectionism, difficulty making decisions, and self-doubt, which will begin on October 21, 2017. Registration is now open.