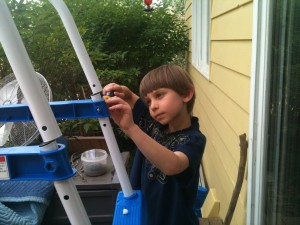 While I sat in my comfy chair writing last week’s post as my little boy slept and my older son was trying to fall asleep, Everest stumbled out of bed to tell me he felt scared. This was hardly a new communication; he’s felt scared more nights that I can count since he turned five (he’s almost eight). But because I happened to be writing about teaching your kids how to respond to fear, I decided to apply the lesson in the moment:

“Everest, do you remember how we’ve been talking to Asher about his Monkey Brain and how he can boss it back? Well, let’s see if you could try that now. What would you like to tell fear?”

“Go away, fear! You’re lying to me! There’s nothing to be scared of in here!”

And he did. We’ve done this exercise many times before, but using the reference of how angry he feels when his little brother messes with his stuff seemed to connect him to a stronger part of himself.

He walked back to bed and I continued to write.

A few minutes later, he stumbled back over to me and said, “Mommy, I don’t feel scared anymore. I just feel sad. Could you please give me some comfort?”

So I lied down next to him and held him close. I scratched his back and told him how much I love him. I thought about how often it happens that when the fear is unveiled, what lies underneath is sadness. In other words, he thinks he’s scared of snakes, but as soon as he bosses his fear-mind into place, the sadness emerges. Why do we gravitate toward fear instead of the core feeling of sadness? I imagine it’s because fear is a more defensive and, thus, a falsely powerful emotion whereas sadness renders us vulnerable, like a soft sea-creature without its shell. Unless we know that we can handle the sadness, fear creeps in as a protection. But eventually, as I see with my clients every day who were anxious as kids, the unfelt sadness mutates into anxiety as adults and demands attention and healing.

Oh, boy. My sweet, sensitive boy. There are times when he just breaks my heart. How many kids think about the fact that we’re all going to die one day? (I know from working with a highly sensitive/anxious population that it’s more common than we think.) He lives with an exposed heart, aware of the fleeting nature of life and the noble truth that things are always shifting, changing, dying. My husband and I often remark that, although I’m Jewish and my husband was raised Catholic, Everest was born with a Buddhist soul. He lives this quote from Pema Chodron daily:

And I’m left with the awesome and, at times, overwhelming responsibility of teaching him how to relate and respond to the sadness without being overtaken by it. I also remind him that with every death, with every loss, comes a rebirth and a new beginning – that it’s through experiencing the sadness as fully as possible that the joy is released.

“What can you do with the sadness?” I asked that night. as I often ask.

“Let’s be with it together. Let’s take a deep breath right into the middle of that sadness.”

In another era or another culture, he would apprentice under a shaman and his sensitivity would be honed and utilized as  medicine to his people. But this culture is nothing short of brutal for the sensitive souls among us. We devalue feelings, especially emotional boys, and regard a sharp intellect and “normalcy” with the highest praise. If he was in school, there’s not a doubt in mind that he would been bullied into believing that he’s a “sissy” by the kids and a “problem child” by the teachers, and his self-esteem would be the gutter in about five minutes. We’ve done our best to preserve his spirit and self-worth, but there are times when the cracks show through and we’re at a loss as how to help him.

In September he’ll begin Bodhi School, a monthly class offered by the Boulder Shambhala Center to teach kids how to meditate and other age-appropriate practices that cultivate mindfulness. He’ll also start bi-weekly classes at our Jewish Renewal synagogue, where he’ll learn about a loving and life-affirming God/Goddess in an egalitarian and inclusive community. I have no idea how he’ll take to either of these classes, but our hope is that he’ll learn some lifelong skills, tools, and belief systems that will support the healthy unfolding of his true nature. We’ll continue our homeschool workshops and continue to allow for plenty of unstructured time in our days so that boredom can give rise to his creative impulses and scientific inventions. And we’ll support him in every way that we can, with love, acceptance, and reverence for his brilliance, his challenges, his creativity, his sensitivity, while honoring the unique path that he came here to follow without attempting him to fit him into the narrow societal box called “normal”.