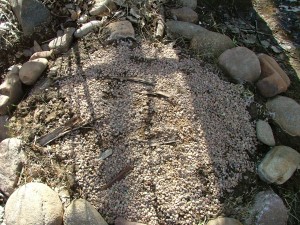 At each equinox and solstice, my family creates a ritual that facilitates sending prayers of release and rebirth on the wings of the change of seasons. Seasons, like dusk, dawn, and all major life transitions, are portals where the ordinary barriers that separate us from our deepest intuition and highest nature are softened. They’re times when we’re offered windows of clarity into areas inside of ourselves that need attention. When we shine the light of consciousness on these areas, we can concretize them in the form of ritual and thus inspire profound and sometimes magical layers of change to occur.

A ritual is anything that inspires this process of acknowledging the areas of tightness and asking for help with enlivening the areas we would like to accentuate. Rituals often draw upon the four elements – earth, air, fire, and water – and they often include prayers of some kind. But, as with so many areas of modern culture, there are no definite blueprints that you must follow when you engage in ritual. This is both a blessing and a challenge. It’s challenging in that we no longer have the broader community to guide us through time-honored rituals; it’s a blessing in that we’re free to create what is most meaningful and present for us today.

Last summer solstice, my family dressed in white, created fairy wands and orange candles, and tossed what we wanted to let go of into the flames of the solstice fire. On autumn equinox, we made leaf boats onto which we wrote down what we wanted to let go of and what we hoped to welcome in. We always say prayers not only for ourselves but also for our loved ones, our community, and our world. And on winter solstice we started a new family tradition inspired by a book called Night Tree.

We were a bit late this year, but last week we celebrated our spring ritual down at the creek that runs behind our house. My husband had spontaneously created an egg mound out of stones and gravel, and we decided to write down what we hoped to birth onto shards of fallen tree bark. With a ballpoint pen, we etched our prayers into the bark and asked that the “fairies” carry them on the warm winds of spring. Like the symbolic spring egg, we’re pregnant with new parts of ourselves, and when we speak these parts aloud it helps to bring them to fruition.

The ritual was simple, but it always brings a grounded joy to my family when we depart from our ordinary lives and take the time to make prayers. And there are few things that bring me more delight than watching my children dig a little deeper inside themselves and talk about the areas that they would like to let go of and those that they would like to birth.