The Art of Patient Loving 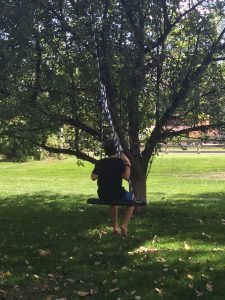 Perhaps the area of our lives to suffer most from the increasingly fast pace of the culture is love, for the expectation of immediate results naturally leads to a belief that love should not only be easy, but that when there’s a problem, it should be remediated quickly. Love doesn’t work this way. The truth is that when it comes to intimate relationships – with partners, friends, and children – very few things come quickly or easily.

As I’m decades away from my own battle with relationship anxiety and many of my long-term clients are now swimming in their own troughs and trials of early parenting, it’s on the front of the parent-child relationship that the need for patience appears most prominently in my life. For there’s a loud and pervasive expectation in the current parenting culture that says that when there’s a challenge with a child, it needs to fixed right away. As in instantly. But what I’ve found is that in reality the true challenges that we attend to in our children are not easily remedied, and the expectation that it should be so creates untold levels of anxiety.

I was talking to one of my dearest friends about the topic of patience a few weeks ago. We’ve raised our boys together and are now watching them emerge into young men. Between the three of them, our boys have had their share of challenges, and had my friend and I succumbed to the dominant parenting model and pressures our boys would have been sifted through the medical and academic systems where they would have been tested, labeled, and branded as problematic in some way. Stigmatized and likely bullied, their self-esteem would have tumbled into the gutter and we would not only then have to deal with the original challenges but would have had the additional, much more difficult, layer of low self-worth on top of them.

Our boys are far from perfect and we both have a long way to go on the parenting road, but we can say without a doubt that our boys know themselves, like themselves, and trust themselves. They’re joyful, self-directed, and passionate about their interests. They have close, good friends and are comfortable around adults. They’re well on their way to growing into young men with strong moral character guided by a mindset of kindness. What more could we ask for?

None of this came easily. Those of you who have followed my blog from the beginning know that my older son struggled intensely with the fear of death for years and years. And years and years. And more years. Despite all of our attempts to attend to this fear through teaching mindfulness, Tonglen, and many other creative and traditional approaches, the fear held fast. It manifested in different ways at different times in his life, most prominently through difficulty falling asleep, and there were times when we felt powerless, hopeless, and scared that the fear would follow him forever. But slowly and imperceptibly, as he grew and matured and finally settled more fully into himself, the fear dissipated.

In fact, at this point it’s virtually non-existent, and in some strange turn of psychological experience it seems actually to have done a complete one-eighty. Not only does he not fear death, he doesn’t fear anything, and every other day asks if he can go skydiving, hang-gliding, para-sailing, and every other death-defying flying experience he can think of. And, as I shared here, a few weeks after he turned fourteen, he soloed in a glider. Was he scared? Appropriately, yes. But he walked through the center of the fear and found ecstasy on the other side. I literally could not have imagined the young boy who was afraid of so much, including struggling with separation anxiety until he was nine, flying into the sky by himself at fourteen.

The same principles apply in the realm of relationship anxiety. People suffering from relationship anxiety often ask, “When will I feel better?” Given the misery that relationship anxiety can create, it’s an understandable question. But as I explained in the article linked above, you can’t rush healing. We heal in layers and spirals, moving forward then what appears to be backward then around again into the core of healing. While there are some people who take my Break Free From Relationship Anxiety E-Course and are able to find their clarity and serenity quite quickly, for many others the path to serenity is more circuitous and lengthy. In a culture that promises the quick-fix at every turn, this can be disheartening. But when we’re able to shift our mindset from one that expects instant results to one that understands that true healing takes time, we can relax into the process a bit more.

As I’ve quoted several times on this blog, this quote from Rilke can be helpful when we’re on the long road of healing, whether in parenting, partnership, or in life:

“Be patient toward all that is unsolved in your heart and try to love the questions themselves, like locked rooms and like books that are now written in a very foreign tongue. Do not now seek the answers, which cannot be given you because you would not be able to live them. And the point is, to live everything. Live the questions now. Perhaps you will then gradually, without noticing it, live along some distant day into the answer.”

This isn’t the message of the culture, but it’s the message from the soul. When we can breathe into the process of healing and begin to love the questions themselves, life becomes first more manageable, then tolerable, and eventually enjoyable. It all takes time.