The Boy Who Couldn’t Fall Asleep 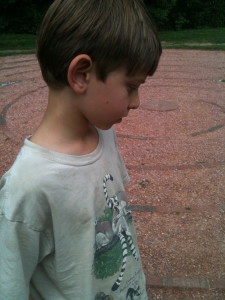 There are moments of deepest heart-tender grace when my nine-year old son breaks me open and brings me to tears, when I see clearly into the center of his soul and it feels like I’m looking at an angel. These aren’t always joyous moments; no, quite often they’re fraught with pain at the challenge of how one so exquisitely sensitive, with skin as fair as light, must walk through this often harsh and cruel world. While there is literature now on highly sensitive children, it’s not enough. Quite often I sense that my husband and I are fumbling in the dark as we try to raise our son to be an independent, confident person without crushing his spirit.

It’s 11:30pm and he’s been trying to fall asleep for several hours. Tired from my full day of clients and having woken up early with my four-year old, I’m not pleased with his interruptions as I try to finish work on my computer before going to sleep myself. Some of them are the classic declarations of a child who can’t fall asleep: “I have to go the bathroom” and “I’m thirsty.” Mostly he remains quiet, knowing that he’s long past the age when we’ll lie down and hold him every night (although that’s what he would prefer). But his tossing and turning and talking and getting up and interruptions are driving me batty.

I go downstairs to talk to my husband.

“This has to stop. He’s nine. He should be falling asleep more quickly without needing us close by,” I say with a hard edge in my voice.

I think back to the time when he was about a year old and, after suffering through endless nights of waking up 10-12 times to nurse and walk, we tried to “sleep train” him. We left him to “cry it out” in his crib and after about ten minutes of pure torture for all of us, he threw up. That was the last time we allowed ourselves to be seduced by a method that may work for some babies without negative longterm effects but could never work for our son.

I know he’s not a baby, but everything we’ve tried over the years has resulted in some sort of failure. From herbs to melatonin to gradual desensitization to mindfulness to creative visualization to getting a kitten to exercising more during the day to homeopathy, the nighttime hours have continued to baffle us as parents and twist like a black sheet around our son every night. Nighttime is when the anxiety is unleashed. Nighttime is when the shadows arrive.

My husband breaks me out of my reverie and says, “I think this is all part of the package of who he is: his mind never stops. He’s highly sensitive. Who knows what’s going through his brain?

With understanding comes compassion. My husband has reminded me of who my child is and released me from the grip of wishing he was someone else or that our story was anything other than it is. I return upstairs and climb into bed beside him.

“I don’t really know. Just everything.”

“Tell me one thing.”

“I’m thinking about those big birds that everyone will have at Thanksgiving. I don’t want to see it, Mommy. It makes me too sad.”

Ah, so there it is. And tears fill my eyes. My sweet, sensitive, empathic, vegetarian child in a meat-eating family who’s lying here close to midnight thinking about the animals that humans kill and consume. The other day when we were shopping at the grocery story the checkout clerk handed me a flyer about Thanksgiving turkeys. I stuffed it into the grocery bag, and the next thing I knew he had ripped it in half.

“What are you doing?” I asked him.

“I don’t want you and Daddy to get one of those birds again,” he said with a long face.

“I know, sweetheart. I know it’s a hard day for you. But everyone else in our family eats meat and if don’t have a turkey it won’t be a real Thanksgiving.”

He suffers through Thanksgiving every year. While he would like to stage a coup, he usually finds a way to tolerate the blatant display of death that defines this quintessential American holiday. But it hurts him deeply inside. At nine, he knows he can’t control everyone else to appease his pain, but he still dreads the day. It’s not necessarily the meat itself (my husband and I eat plenty of chicken), but that the large bird arrives whole, is stuffed whole, cooked whole, and then sits whole on the counter until carved. When I put myself into his shoes, I can only imagine how horrifying it must to see such a blatant and graphic display of death. To him, it’s no different than purchasing, prepping, cooking, and eating a cat.

So I say to him, “Lovey, if we don’t have a turkey it’s not going to feel like Thanksgiving to our extended family. But maybe this year we’ll just have Thanksgiving with our family, and if anyone else wants to come even if there’s no turkey, they’re welcome to come. How does that sound?”

“Yes, Mommy, that sounds good.” I can feel his soul exhale. There’s a visceral release inside of him.

“We can’t do that every year, you know. But you’ve tolerated it for several years so maybe we can honor you this year. Let’s talk to Daddy about it tomorrow.”

And then he falls asleep.

The mainstream has always encouraged us to respond differently and, in our opinion, callously to his sleep troubles, and now their messages traipse through my brain: “You should have let him him cry it out as a baby”; “You coddled him and now you’re paying for it; this isn’t good for him, either.” But I don’t hang out in that space for very long. I know in my gut that the mainstream never had answers to our sleep challenges, and they still don’t. Our culture simply doesn’t understand highly sensitive children, and, unfortunately, having difficultly falling asleep is one of the hallmarks of a sensitive soul. I feel angry and disappointed and frustrated that there’s no one to guide us through this area. But I also trust that my husband and I will figure it out, that through discussions and gentle experiments we’ll resolve the issue in a way that works for all of us. Eventually. At least that’s my hope.

At the same time I recognize that sometimes parenting challenges simply don’t have immediate and convenient solutions. With every gift comes a sacrifice, and I know that the gift of parenting this exquisitely sensitive child, a child who lies awake on a Tuesday night thinking about the millions of big, dead birds that millions of people will display on their Thanksgiving tables in a few weeks, comes with challenges. He needs us. He’s nine years old and the voice in my head says, “He’s nine. He shouldn’t need you so much at night.” But I know from counseling hundreds of adults who embodied my son’s exact level of sensitivity as children that if we don’t attend to him in these ways he’ll grow up with the constant companion of anxiety. “You’re coddling him!” says the mainstream. Call it what you will. For now, without any other feasible solution and until we can teach him how to manage his sensitivity in healthier ways so that it doesn’t morph into anxiety, we will continue to stay close by as he finds his way down his long, winding, sometimes painful road to sleep.

Follow up: As I expected, when I presented the idea to my husband of a turkey-free Thanksgiving, he was immediately on board. Love this man. He told me about a show he was watching about Native Americans and how they won’t eat turkey and call the day Thanks-taking – as in, thanks for taking our land. So we’ll find a different way to honor this day and focus on that it’s really about: a day to connect deeply to gratitude, perhaps a way to give back in some way, to honor our land and the Native people that used to roam freely along these waterways. Right now I feel almost unbearable gratitude for this child who will grow into a man that will work hard to preserve our beautiful planet and all its inhabitants. May his spirit never be crushed.

The Power of Gratitude