The End of Summer

“The crickets felt it was their duty to warn everybody that summertime cannot last forever. Even on the most beautiful days in the whole year – the days when summer is changing into fall – the crickets spread the rumor of sadness and change.” 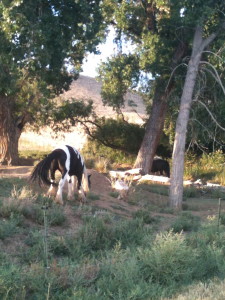 Everest and I often sit on the chaise on our balcony on summer evenings. We snuggle up and watch the magnificent night sky filled with billions of stars. He points out the Milky Way and the Big Dipper. We listen to the frogs in our creek and the coyotes in the distance. We talk about nothing and everything. It’s our special time after his little brother goes to sleep to connect with each other without distraction.

A few nights ago the crickets were particularly sonorous. They reminded me of the above quote, which illustrates so beautifully and painfully the end of a season or a stage of life. The coolness in the air and the lack of mosquitoes alerted us to the fact that summer is, indeed, ending. It’s always a bittersweet time.

“Summer is ending, isn’t it?” I said to Everest.

“Why is it, Mommy?” Everest often asks why when he doesn’t want to accept something as true or if he’s needing more information in order to process it.

“Because all seasons come to an end. It’s always a little sad, especially when we’ve had such a lovely summer.”

We sat in silence for a few minutes, and then he said, “I’m scared of black holes.”

Everest hasn’t been scared of black holes in months, if not longer, and something inside of me knew that his sudden fear had nothing to do with black holes but with his sadness that summer is ending. It’s like my clients who focus on their partner’s “faults” instead of acknowledging the grief and fear inherent to committing to one person for life. It’s like a woman in her first trimester of pregnancy perseverating on the health or viability of her fetus instead of letting herself descend into the grief-filled hibernation that her body/mind is inviting her to feel. When it comes to avoiding pain, human beings are masters of distraction. It’s easier to focus on the fear of black holes than it is to soften into the vulnerable space of grief. We don’t know that the undefended heart can tolerate sadness so we siphon it off into the head-space of anxiety.

So I said to him, “I don’t really think you’re scared of black holes. I think it’s hard to let yourself feel the sadness of the summer’s end. Let’s put our hands on our hearts and breathe into the sadness. And then let’s remember that with every ending comes a beginning, and the endings are only bearable when we remember that something beautiful will emerge. We’re saying goodbye to the joy and warmth of summer,  but we’re also saying goodbye to mosquitoes and too much heat. Soon the leaves will change color and you and Asher will be able to play in the entire yard without worrying about mosquito bites.”

Everest certainly isn’t alone in feeling sad about the change of seasons. All people feel it, but those who are highly sensitive feel the sadness, restlessness, and uncertainty that characterize the liminal zone with exquisite awareness. As Maya Tiwari writes in The Path of Practice: A Woman’s Book of Ayurvedic Healing:

“When the seasons change, we experience a sympathetic internal shift. All life-forms open themselves up to receive cosmic redirection from nature during these crucial seasonal transitions, so we are likely to be more vulnerable and unsettled.”

What is the redirection that humans receive? It’s different for everyone, of course, but if you spend some time moving toward the restlessness and vulnerability, you’ll discover the message speaking to you during this time. Like all transitions, the shift from summer to autumn is a portal zone when the veil between the worlds is thinner. This means that you’re offered an opportunity to spiral closer to the core of who you are, letting go of beliefs and behaviors that no longer serve you.

It’s become increasingly clear to me, especially as a mother to a highly sensitive child, how essential ritual is for anchoring ourselves during these vulnerable portal periods. In a few days, we’ll celebrate Rosh Hashanah – the Jewish New Year – which includes a beautiful ritual called Tashlich where we will cast bread crumbs into a body of living water (creek, river, ocean) to symbolize casting off anything we wish to let go of. To prepare for Rosh Hashanah and the ten day period following which culminates in Yom Kippur (Day of Atonement), we’ve been following the Jewish ritual of taking spiritual inventory during the month of Elul (the last month of the Jewish calendar). My dear friend’s brilliant Elul Tools have been instrumental in our self-inquiry, and Everest has hungered for our nightly ritual of listening to the Shofar (ram’s horn to symbolize that this is the time to wake up) and reading the tools the way some kids beg for television.

All traditions include ritual as an essential way that we learn our place in the world, in the year, and in time-space. As Father Thomas Keating writes in The Mystery of Christ: The Liturgy of Spiritual Experience: “Healing power is going out from Christ when one approaches sacred rituals with faith.” And ritual isn’t only reserved for religious or spiritual environments. As Tom Driver writes in Magic Ritual: Our Need for Liberating Rites that Transform our Lives and our Communities: “Anthropology has discovered not only the prevalence of ritual in all societies but also its intimate linkage to social process… To lose ritual is to lose one’s way. It is a condition not only painful and pathetic but also dangerous. As for the whole society, sooner or later it will find rituals again, but they be of an oppressive rather than a liberating kind.”

As rituals often follow the seasons, they can ground us in the circular awareness of life. For the anxious and sensitive mind who perseverates on the acute awareness of the passage of time, living in a linear-minded culture this obsession can only result in one place: death. In other words, our culture anchors us in a linear time-space reality which begins with birth, progresses through school, work, family, and ends in death. When we participate in life from a slowed-down perspective (and rituals require us to slow down and turn inward), we step out of commodity time and into a sacred, natural rhythm.

In a few days, we will cast off our bread crumbs into the waters of our creek. During this potent, liminal zone where summer transitions into fall, we’ll ask to let go of unpleasant habits and behaviors, and we’ll set our intention for the New Year. But as we sat together on the balcony that night, I wrapped my arms around him so he could anchor himself into my warm body. And together, we breathed into the sadness. Together, we softened into the tender places of our hearts. Together, we took one step against forming a habit of anxiety and instead let ourselves feel the sadness that is an essential and inherent part of a life fully lived. And by feeling the sadness fully, we opened the pathways for joy to enter like the exquisite golden sunlight that permeates the autumn days to come.

The Secret to a Peaceful Life (of the fear of death)