The Fear of Aging 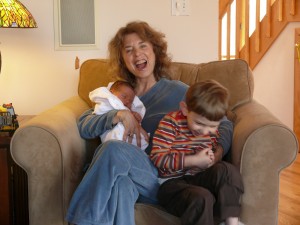 My mother: vibrant at 70

During my search for new recipes for my little vegetarian son (who declared he was a vegetarian about nine months ago; you can read about it here), I stumbled upon a beautiful and inspiring book called, Healthy at 100, by John Robbins (author of Diet for a New America). As my current life affords scant time for the luxury of reading, the book sat around the house in a variety of locations for a couple of weeks. But a few days ago something urged me toward the book, and even though work and kids called as always, I picked it up and started to read.

There are some books that draw you in from page one. They speak to an inner place of struggle or inquiry, loss or longing. The author manages to write the words that you didn’t know how to speak, thereby naming your experience and helping you make sense of your life. This was one such book for me. And after the first few pages, I could feel a disparate string of thoughts that have been floating aimlessly in my subconscious coalesce to create an ah-hah moment:

We have everything backwards in this culture regarding our expectations and perceptions of the two major transitions in adult life: getting married and aging/death. We look forward to getting married and dread aging, when it should really be the other way around!

The book has nothing to do with marriage, but it has everything to do with how our expectations shape our reality. One of the central tenets of my work with the wedding transition is that our culture transmits the expectation that everything around the wedding (including engagement and early marriage) is supposed to be fantastically joyous. When another set of emotions emerges, like grief, confusion, doubt, and fear, the bride or groom-to-be is blindsided because they jut up against the expectation.

On the other end of the lifecycle spectrum, we have a culture that transmits the message that aging is to be dreaded, feared, and denied. We portray images of illness and misery, thereby setting up the expectation that aging is something to be feared. It honestly never occurred to me until I read this book that not only could I not dread aging and feel a pang of loss with each passing birthday, but I could actually look forward to my later years! Through Robbins’ discussion of four different cultures around the world who have the highest number of long-living, healthy people – in other words, not just people who live past 100 but who do so with vitality, passion, and joy – my consciousness was turned on its head.

He writes first about the Abkahsian culture in Russian where “people are esteemed and seen as beautiful in their old age. Silver hair and wrinkles are viewed as signs of wisdom, maturity, and long years of service” and he contrasts this to our culture where “we tend to associate old age with ugliness and youth with beauty, so much so that an increasing number of people today are willing to spend a great deal of money and undergo a considerable degree of pain in order to have facelifts, that they might look younger.” (p. 14)

People in Abkahsia, and the other cultures he discusses, actually look forward to aging as they recognize it as a time of increased status, wisdom, peace, and joy. As I said, the idea of looking forward to aging stopped me in my tracks. Do you know anyone in this culture that looks forward to aging? As I read this book and absorbed Robbins’ sage words, I began to look around me with new eyes and noticed all of the images of dread and despair when it comes to the topic of aging. As he says:

“It has been said that we can destroy ourselves with negativity just as effectively as with bombs. If we see only the worst in ourselves, it erodes our capacity to act. If, on the other hand, we are drawn forward by a positive vision of how we might live, we can shrug off the cynicism that has become fashionable today and build truly healthy lives.

“It is extraordinarily important for us today to replace the prevailing image and reality of aging with a new vision – one in which we grasp the possibility of living all our days with exuberance and passion. There are few things of greater consequence today than for us to bring our lives into alignment with our true potential for health and our dream for a better tomorrow.” (p. xviii)

I’ve written extensively about the how the unilaterally positive images our culture promotes around the wedding create an expectation that engaged and newlyweds will only feel joy and excitement about getting married. Our culture leaves no room for the fact that getting married is, for many people, a death experience during which they must die to the old identity, belief systems, and expectations in order to make room for the rebirth of the new life. Most clients will share some version of the following statement with me, “I feel like I’m dying. I don’t know who I am right now. I’m not feeling anything I thought I was supposed to feel during this time. I’m grieving and letting go of my identity as a single person, my attachment to my family of origin, and my beliefs about love and marriage – which, it turns out, were all faulty. I’m letting go of who I’ve been and I don’t know who I’ll be on the other side of the wedding.”

The challenge of these difficult feelings is not the feelings themselves but the fact that they’re in diametric opposition to how people think they’re supposed to be feeling. And the reason they think they’re supposed to be feeling joyous and alive is because of the images they’ve ingested through every media source from the time they were sentient enough to receive images. Most people won’t even allow themselves to feel the dark underbelly of the wedding transition because the cultural injunction is too strong against it. They power through the wedding, sweeping the difficult thoughts and feelings under the swathes of silk and tulle, and then crash on the other side sometime in the first weeks of marriage.

I’ve often wondered how different the mainstream experience would be if we said to women (and men), “After you become engaged, you’re probably going to freak out. Expect it. Expect this to be hard. You’re supposed to question everything about your relationship, love, marriage, and yourself. And the more you address the fears and questions now, the happier you’ll be on your wedding day and in your first year of marriage.” It’s the expectations that create the resistance to reality. Change the expectations and we change the entire experience.

Similarly, or on the other end of the spectrum, we’ve been indoctrinated to believe that old age is a time of misery, physical pain, loneliness, and boredom. Rarely do we see images of vital, joyous, healthy elders portrayed in popular media. We sequester the elderly into “old age homes”, which are one step shy of a moratorium. Robbins asserts that one of the reasons why we decline so rapidly in later years is that we expect to decline; we expect our health to fail and so it does. As he so insightfully writes:

“For many of us in the industrialized world, our aging in a source of grief and anxiety. We fear aging. The elderly people we see are for the most part increasingly senile, frail, and unhappy. As a result, rather than looking forward to growing old, we dread each passing birthday. Rather than seeing our later years as a time of harvesting, growth, and maturity, we fear that the deterioration of our health will so greatly impair our lives that to live a long life might be more of a curse than a blessing.

“When we think of being old, our images are often ones of decrepitude and despair. It seems more realistic to imagine ourselves languishing in nursing homes that to picture ourselves swimming, gardening, laughing with loved ones, and delighting in children and nature.” (p. xiii)

In contrast, Robbins cites one researcher who says of the Abkhasians that

“Sickness is not considered a normal or natural event even in very old age. To Benet, the reasons for the remarkable health and longevity is Abkhasia are many. One factor that she highlighted in particular was the tremendous respect for the aged that is a defining feature of Abkahsian culture. In Abkhasia, a person’s status increases with age, and he or she receives ever more privileges in the passing years.” (p. 13)

As I was reading the book I heard one of my grandfather’s favorite pet phrases echo in my ear, one which he must have said a hundred times in his later years: “Some golden years! I have arthritis, my knee hurts, all of our friends are dying. Hah!” And my grandmother would chime in, “Golden years – oy!” My grandparents did, actually, enjoy many aspects of their “golden years”, but, despite their healthy lifestyle, they were challenged by myriad of physical ailments. Could some of these ailments been brought on by their expectation that their later years would be fraught with misery?  In other words, would they have lived longer, more fulfilling lives had they believed that it was their birthright to thrive in old age?

Something monumental has shifted inside of me since reading this book, but habitual and conditioned responses die hard. This morning I noticed a long, gray strand of hair that had fallen out of my head and landed on my hand. My first response was, “Oh my god. Oh no. Not a gray hair.” This certainly wasn’t the first gray hair I’ve seen; they’ve been sprouting up in secret, undercover groves since the birth of my first son. But it was the first time I’ve seen one since the birth of my new consciousness regarding aging. I noticed my habitual negative response and then I breathed into another response and tried it on for size: “Oh, a sign of age. A sign of wisdom. A sign of more peace and fulfillment in my life. Yes!” I’m not quite there yet, but I trust that with time I’ll be able to reverse my conditioning and approach aging with a positive attitude. And I’ll have the next seventy years to practice : )

To listen to an interview I conducted with John Robbins on his perspective on transitions, click here.