The Grief and Joy of Letting Go

Our firstborn son turns sixteen tomorrow. I started writing this blog when he was five, and some of you have followed my parenting journey since then. I know it’s as cliché as it gets, but honestly… I don’t know where the time has gone.

Wasn’t he just a little boy grieving about his last day of being six? 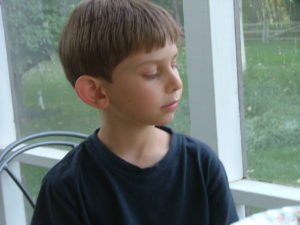 And then he turned ten, and I wrote about our yearly ritual of walking the labyrinth as a way to mark the passage of time. 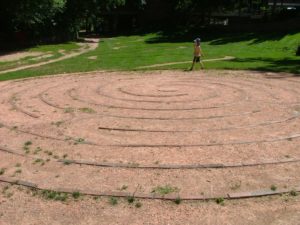 In the blink of an eye he turned fourteen and soloed for the first time in a plane. 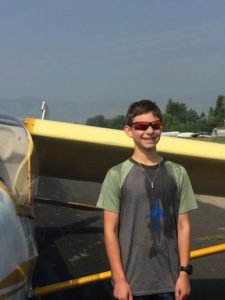 And now he’s turning sixteen, almost a man, one step away from earning his pilot’s license. One more step toward his path and dream of traveling into space. “Higher, faster, farther is the motto in aviation and space,” he told me one night last week as we sat under the stars for our summer pre-bedtime ritual.  “Well, that certainly sounds like you,” I replied, my eyes filling with tears of pride and grief as they have so many times this past week.

The conversation continued. “How did you know that you wanted to be a pilot?” I asked.

“I would see the moon when I was little and I wanted to go there. I always wanted to be in the sky.”

“And now you’re one step closer to that dream.”

He had just passed his private pilot’s written exam the day before. He studied all summer, hours every day, for the test is arduous and if he didn’t pass he wouldn’t be able to get his pilot’s license this week, as he fervently hopes to do. This road has not been straightforward (few paths in life are), and he’s had to overcome many obstacles over the years to be able to sit for that exam. But he did it. His passion lit the fire that would see him through the challenges.

“Moon was one of your first words,” I reminded him.

Our kids’ transitions are their own. They cross thresholds first from the womb into babyhood, from babyhood to toddlerhood, then becoming a little kid, a tween, a teenager, a young adult. But their transitions are also our transitions. Every time they leave a stage behind, we both grieve and gain a piece of our own independence back. We ache and celebrate, long and release, weep from loss as much as from pride. Parenting, like life, is a paradox at every turn, holding the polarities of emotion in the pocket of the heart every day.

Because of my lifelong interest in transitions, I’ve carried the philosophy that the more we grieve and let go on the front end of a transition – during the engagement, the pregnancy, while packing up the boxes, before the graduation, the day before a birthday – the more present and celebratory we can be on the transitional day and on the other side. For transitions are not only about grief and loss; we grieve the losses so that we can celebrate the joys. With my kids, the more I allow myself to grieve before their birthdays or milestones, the more joyful I can be for and with them as they make these essential crossings.

And so I process my grief. I write. I talk to friends. I cry. I weep. I ache. I dance. I feel the sweet moments when the tears well up from my soul and I allow them to move through me. Sweet tears of loss that speak to the depth of my love.

Here’s the heartbreaking contract of parenting: We devote ourselves in every way to nurture the spirit of our child so that their light shines as brightly throughout their life as it did on the day they were born. We tend and ache and sacrifice and weep and give and give and give even when our own well has run dry so that our children will not only grow into adulthood with hearts intact and minds ablaze but so that they will surpass us. This is, in fact, how the human race evolves: each generation outshines the one before. We guide them into the world while fighting against the impulse to keep them at home, tucked inside our arms forever.

Robin Wall Kimmerer writes about this beautifully in Braiding Sweetgrass:

“I had known it would happen from the first time I held her – from that moment on, all her growing would be way from me. It is the fundamental unfairness of parenthood that if we do our jobs well, the deepest bond we are given will walk out the door with a wave over the shoulder. We get good training along the way. We learn to say, “Have a great time, sweetie” while we are longing to pull them back to safety. And against all the evolutionary imperatives of protecting our gene pool, we give them car keys. And freedom. It’s our job.”

It’s true: the letting go happens in stages. I remember when he was a baby and I held him in my arms and wept because I knew he would leave in eighteen years. It seemed far and close, and now it’s closer still. At every small stage of becoming more separate – his first tooth which indicated that he could eat solid foods and would not longer be solely dependent on my milk, when he first walked, which meant walking away from me – I wept from grief and pride.

When he first realized he wanted to be a pilot, I was terrified and proud, but I had time to wrap my mind around it. At thirteen, he started his glider training. At fourteen, he soloed. Somewhere in there he realized that it wasn’t only that he wanted to be a pilot. His passion for exploration extended into outer space, and he started to hint here and there about wanting to become an astronaut. Everything inside me screamed NO. Wasn’t the sky enough? But it wasn’t enough, and I could see him wrestling between wanting to protect me and wanting to listen to the flame of his calling. It was on his fifteenth birthday last summer that I explicitly said to him, “I support you doing whatever you want to do, going wherever you want to go.” He would have done it anyway – he didn’t need my permission – but I wanted him to know that I would support him in every way I could to help him realize his dream of becoming an astronaut.

At the heart of attachment parenting lives the wisdom that the more you attend to your child’s needs and attune to their temperament, the safer they will feel to stretch their wings and fly. I just didn’t think my child would want to fly to the moon and dream of being on the first mission to Mars! He can dream of exploring our solar system because he knows that his dad and I will always hold the other end of the umbilical cord. He’s free to fly away because he knows he can always come back to his safe base. We’ve given him a bright green light that says, “We’ll feel sad when you go but we support you to go. Go as far as you want. Follow your dreams. We will always support you and love you.”

But when they do fly away – when the son of your womb, the one who you walked back and forth across a deck in Los Angeles in the middle of the night because the only thing that would soothe him was the sight of the moon, when this child takes their first professional step into the world that he dreams will land him on that same moon one day – you burst from grief and pride and you weep.

When he passed the written exam last weekend, I could not look at him without my eyes filling with tears: tears of more-than-pride (“pride is not the word I’m looking for,” says Lin-Manuel Miranda in Hamilton) and tears of grief. And when my son, ever attuned to the subtlest nuance of expression on my face, asked me, “Are you sad?” I said, “I’m so proud of you and I’m so sad for me. But you don’t have to take on my sadness. It’s mine. It’s part of being a parent.”

A grief swept through me that day that I have not known in a long time. The grief of mothers who carry a bit of their child always in their body, perhaps a few of their cells left behind in the womb. The grief of mothers who know that our time in this form is limited, that in three years he will leave the nest and literally – quite literally – fly away.

That night I reached for my husband; he knows most closely what I was feeling for he, too, both revels and aches for Everest’s growing up. We held each other and reminisced about how we got here. I cried and cried again. He held me, his own tears silent but there beneath his words and streaming through his arms wrapped around me. Our son, our firstborn, one step away from fulfilling the dream he’s carried his entire life. There are no words. And still I try…

Today, the day before his birthday, I tend closely to my heart so that tomorrow there will only be tears of joy when he crosses the threshold of his sixteenth birthday. I will celebrate as my firstborn son soars into the slipstream of his calling, as he flies into the sky and possibly, one day, to the moon… and beyond.