The Royal Wedding: What Is Kate Really Feeling? 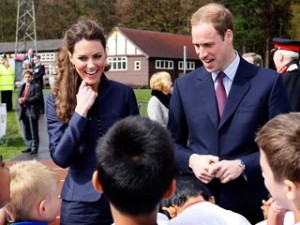 My husband has been urging me for months to comment on celebrity weddings and other transitions, but I usually heed my own advice and adopt an anti-media diet. The media is a hyped up, amplified version of life, and sometimes it’s hard to find the kernel of reality wrapped up inside layers of glossy taffeta headlines. As I like to live my life as close to reality as possible, I generally swerve away from internet news flashes and newspaper headlines. In fact, when standing in line at the grocery store, I consciously remind myself to avert my eyes from the magazine rack so I can avoid the temptation of indulging in the fantasies.

But occasionally something catches my eye and causes me to wonder what’s going inside on a celebrity’s mind around a major life transition and the media’s response to it. Such was the case a couple of years ago when Liam Neeson tragically lost his wife, Natasha Richardson, and was applauded for returning to work just a couple of weeks after the loss. The magazine article mentioned his strength of character and commitment to his work, and I thought, “What kind of a culture encourages people to stay busy after a tragic death?” I obviously don’t know the details of Liam’s inner life, and I allow for the possibility that this was the best course of action for his healing process, but what caused me to react wasn’t so much Liam’s choice as it was the mainstream comments about it. Do we, as a culture, really view staying busy as the sanest response to a major loss?

A few days ago, my mind started wondering again as I happened upon the following headline about the upcoming Royal Wedding:

Well, given my professional expertise on the emotions ignited by the wedding transition, I had to read on. Did she divulge the nature of her nerves? I can imagine that getting married in front of two billion people would be enough to cause nerves in anyone, but what else is brewing inside her mind? As is often the case, the article didn’t reveal much more than the headlines and I was left feeling frustrated and hungry for more details.

But here’s my guess about what’s churning inside Kate’s elegant head: the same questions, doubts, and concerns that everyone who finds their way to my work struggles with, magnified by the massive expectation that she and Prince William provide a real-life fairy tale for the world to hang their hopes and dreams upon. While other brides have to grieve the fantasy that their engagement would feel like a fairy tale, Kate is expected to fulfill this fantasy to the hilt.  While other brides have the luxury of struggling through their anxiety, grief, and fears in relative privacy, Kate lives in the public eye and I imagine feels that she must put on a happy face all day even if she goes home at night to cry. (The fact that she admitted to nerves is an act of courage and a breath of honest admission amidst her fairy tale image.) And while some women wear a tiara on their wedding day to simulate the feeling of being a crowned princess, Kate will wear a royal tiara and will be adorned an actual princess. I can only imagine the layers of legacy, story, expectation, grief, hopes and dreams that will be transmitted into her when the jeweled crown is placed on her head.

So what are the common questions that surface during an engagement? What do most brides, if they’re honest, struggle with during the letting-go and grieving stage of the wedding transition, the questions that send them into a tizzy of anxiety until they find my work? These are the most common:

• Do I love my partner enough to marry him?

• If I’m not feeling infatuated and head-over-heels in love every time I see my fiancé, does that mean I’m not supposed to marry him?

• What if it doesn’t last? What if our marriage fails in some way?

• Why am I grieving and struggling with a sense of loss?

• What are the expectations of being a wife?

When Kate wonders if she loves William enough to marry him, the wondering must be laden with the pressure of the entire world hanging their dreams of “perfect love” on their story. When their infatuation fades (as it probably already has), she might be wrought with guilt that she’s somehow failing to fulfill her obligation as a real-life princess. When she notices a sense of loss about the freedom and independence of her old life, it must be magnified tenfold by the fact that she will be handing over a significant aspect of her freedom as a sacrifice for the duties of a royal princess. When she wonders about being a wife, she’s also wondering about being a princess, and I imagine that there are a host of explicit and tacit expectations that she’s wading through as she prepares to enter the royal line. My heart goes out to her. Being engaged is hard enough; being engaged with millions of people traipsing through the inner workings of your mind and watching with a distasteful combination of projection (“I hope they live happily ever after so I can vicariously live out my fantasy of perfect love through their story”) and envy (“I hope they fail because no one deserves to be that happy”) … well, I can hardly imagine it.

The headlines framed her nerves in terms of normal “wedding jitters”, but my guess is that she’s more than just a little nervous. And if by chance she finds her way to this blog post, here’s what I would say to her (as I say to every woman who finds their way to me):

It’s okay to be scared. It’s okay to doubt. It’s okay to want to run away. It’s okay to wonder if you love him enough. It’s okay to question your decision. It’s okay to wonder if you’re making a mistake. It’s okay to feel anxious and panicky. The fear and the grief are a normal part of this, and every, transition. The best thing you can do is to let the difficult feelings in and trust that you’re making a good choice. Find one person who you trust and bare your soul. Breathe. Cry. Journal. The true princess is the heroine who finds the courage to dive into the dark unknown of the underworld and emerge on the other side with a rune of wisdom. The wedding transition is, at its core, a heroine’s journey which requires you to access the deepest levels of grief and fear so that you can take the leap of faith that that must occur when you risk your heart through the commitment of marriage.

In the eyes of the world, you and William are a Princess and a Prince, but at the end of the day you’re just two human beings – two fallible, imperfect, young people taking the brave plunge of committing to a lifetime of learning about what it means to love each other. You don’t have to have all the answers. You don’t have to have any answers. You don’t have to be perfect; perfection is an impossibility and its goal only creates guilt and frustration and a sense of inadequacy. You only have to be you, doing your best to learn about love. Just as we all are.