The Transitions of Childhood 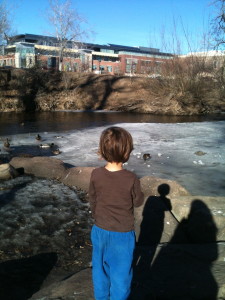 Asher is going through a transition. He’ll be turning four in about seven weeks, and he’s showing all of the tell-tale signs of leaving one stage and shifting into a new stage: reactive, out of control, eating habits shifting and sleep schedule changing. He’s yelling at his big brother for crowding his space, yelling at his dad when he asks if he wants help, and yelling at me when I ask him what he would like to eat for lunch. Five minutes after these outbursts, he’ll be as sweet as pie and telling jokes like the life of the party.

If we parented according to the mainstream model, we would be punishing him for his outbursts and labeling them as attempts to manipulate and control us. But it’s clear to us that his outward displays are his attempts to communicate his inner world: he feels out of control inside so he attempts to exert his control on the world. While we don’t acquiesce to all of his demands, we also don’t turn away from him when he needs us the most. He’s difficult to be around, yes, but if we sequestered him to a corner or sent him to his room we would be punishing him for behavior that is largely out of his ability to change and sending him the message that his big feelings are unacceptable.

When kids are topsy-turvy, it’s challenging, to say the least. He’s all over the map right now and, since we’re in close contact, we’re being taken along for his ride. But isn’t it exactly when he feels like he’s falling apart inside that he needs us the most? And can we expect a nearly-four year old to say to us, “Mommy, Daddy, I’m feeling very out control inside so I’m going to act crazy but just bear with me because I’ll be normal again in a few weeks.” Of course not! Most adults lack the vocabulary to articulate the turbulence of transitions, so it’s ludicrous to expect a child to communicate on this level. In fact, the child depends on us, his parents, to name his experience and be able to say to him, “Asher, I know you’re probably feeling strange inside, but that’s what happens when we grow up a little. It’s not okay to try to control everyone else but let’s find ways to express how shaky you feel.” Since life rarely follows the advice in parenting books, I don’t expect Asher, or any other child, to hear the above statement and change his behavior; he’ll continue behaving in his loud and difficult ways for a long time. But I do believe that a seed is planted when parents can articulate their child’s inner world and create an opening for different, more responsible behavior to take hold eventually.

The most challenging area of his transition that directly affects me is his sleep schedule. Asher has gone to sleep at 7pm on the dot for the last year. He’s fallen asleep quickly and easily, and it’s made that part of my life quick and easy. While my husband spends some time with Everest, I sit with my computer after Asher falls asleep writing my blog and responding to emails and forum posts. It’s essential work time for me and not one that I can easily surrender. So the past two nights, as Asher has gone from a 15 minute bedtime to an hour and a half bedtime, I thought I was going to pull my hair out. “I don’t have time for this!” I seethed inside as he squirmed around on the bed. And, of course, the more I resisted, the more painful the entire experience became.

But last night, in a moment of parenting grace, something else took over. For the first time, I named what Asher is going through: he’s in transition. He needs me more than ever. He needs me to hold him close and ground him with the warmth and presence of my body. He needs me to be fully present without half my mind thinking about getting to my computer. And I was. I dropped fully down into the experience of Asher. I stroked his hair and whispered, “I’ve got you. I love you so much,” into his ear. While he may feel like he’s falling apart inside, I’m here to provide the lifeline that says, “You’re okay. You’re not falling apart. It might feel like you are, but you’re solid inside. And my love will see you through until you find your ground again.” I slowed down enough to hear the wisdom and receive the insight, and then I didn’t want to be anywhere else but with my precious boy. Every stroke on his silky brown hair became a reverie. Every whisper became a poem. Soul to soul, I held him in the places he needed to be held, teaching him the skills and giving him the love he needs so that one day he’ll be able to hold himself. In the timelessness of the now, we united in the eternal bond of a mother and child.

Children are almost always going through transitions. In the span of sixteen years, they must grow from tiny, dependent babies to walking, talking, full grown near-adults. In no other period of our lives do we grow and change so dramatically on every level. Just as they experience physical growing pains as their bones and limbs stretch at great speed, so they experience emotional growing pains as they leave behind each stage. We don’t talk about those transitions. In a culture that has tragically forgotten the essential importance of honoring transitions with ritual and stories, we have no words for this thresholds. And without the words, without the context that catches us in the great net of traditions, we have nothing to offer our children. Just as nothing was offered to us.

When we haven’t been caught through these threshold and breaking points but were left to traverse the scary abyss alone, we slowly close our hearts and push down the grief and fear. When we were banished as kids for expressing “ugly” emotions, the habitual response as adults is to banish and judge those feelings as “ugly” instead of attending to them with compassion. A child punished for being loud and bossy when everything inside of him is falling apart will feel like he’s dying as he’s sent to his room to try to put himself back together. Later, as an adult going through a transition, he’ll not only experience the healthy and appropriate death experience of leaving behind an identity and stage of life but he’ll also feel like he’s broken and falling apart inside, full of shame and the sense that there’s something wrong with him. That’s when he finds his way to my work and learns not only about transitions but about the essential healing work of reparenting that scared, abandoned child.

Children are always falling. It’s our job as parents to catch them. We must heal ourselves first so that we can find a way to attend to our own frustration and impatience then hold the space for theirs. We must gather them close and wrap our firm, strong arms around their little bodies so that they know that they’re not falling apart. We must catch them as they fall so that they learn, with experiential understanding, that change can be scary but also exhilarating. It’s our job to remain steady as they break open. It’s the most important job there is.

It’s important to discover what form your child best receives containment. Just like we all have a love language (the form in which we best feel loved), children also have a way in which they best receive love. Asher is a highly physical and affectionate child, and he feels contained by close physical contact. My husband and I can literally feel his being relax when we hold him or read books together with him squeezed next to us as closely as possible. Other children may feel contained by words and need an explanation for what’s happening for them inside, while still others may need a form of spiritual containment, like prayer, meditation, or ritual. Truthfully, children will respond to any and all of these approaches, but as parents we may not have the time or resources to attend to kids on all levels so we choose the form that will enter most quickly and directly.