The Truth about New Motherhood 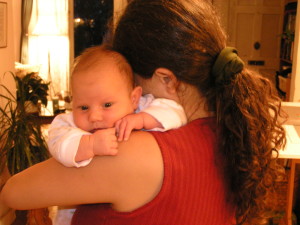 Over the past several years, many of the women who I helped midwife emotionally across the threshold of the marriage transition have birthed themselves as new mothers. And just like our culture doesn’t tell the truth about the challenges of intimate relationships, it also fails us when it comes to offering accurate information and effective support so that women and their partners can traverse the terrain of this next transition with consciousness and joy.

We know it’s going to be hard, but we have no idea how hard it’s going to be. We know that we might be sleep-deprived or have trouble breastfeeding, but we have no idea how these challenges will effect the emotional terrain of our experience, how deeply breastfeeding, for example, is linked to self-worth as a mother and how, if it doesn’t happen easily or at all, we feel that we’ve failed.

Because I’m privy to the interior world of these new mothers’ lives, I know that the photos they post on Facebook of their beautiful bundles often represent a tiny sliver of the whole story. I know how many tears are shed alone. I know how exhausted they are as they wake up multiple times a night to feed, burp, change, and soothe back to sleep. I know how much shame many new mothers carry if they’re not bouncing in a bubbles of joy like a kid in a ball pit every moment of every day, and how much guilt they carry if they feel bored, disappointed, resentful, or confused by the disparity between what they thought they should be feeling and what they’re actually feeling. This certainty isn’t the experience of every new mother; I’ve known women who sail through this time on the wings of pure elation. But it’s not the majority. And those who struggle need to know that they are not alone.

A great deal of the emotional pain that new mothers endure is caused, once again, by the expectations for perfection that the culture espouses. While we may not have explicitly read this anywhere, somewhere women absorb the expectation that they’re supposed to: breastfeed for a year, get their baby to sleep through the night by three months old, stay home with their baby as long as possible before going back to work, and, most importantly, revel in joy. The reality often looks quite different, as honestly shared in this email I recently received (shared with grateful permission):

I had my son about 9 months ago. I have found the transition into motherhood as overwhelming, scary, disorienting, and intense as I did my engagement. In a nutshell, I planned to have a homebirth that resulted in a scary transfer to the hospital because of heavy meconium. I wanted a totally natural birth and ended up having several interventions. I hoped to breastfeed and my low supply could not sustain little guy, so I had to let go of that dream, too. Our baby isn’t a huge fan of sleep and never goes for more than 2 hours at a time – and it has to be on me or my husband (so our connection is fraying, too).

I was a teacher and decided to take the year off (and most probably will continue to stay home and not return to teaching). I’m reaching out because I’m really struggling. I wonder – who am I?!? Life is actually pretty boring with an infant and I miss the busy and easy life I had before having a baby. But I don’t want to put him in daycare so it feels daunting. If one more person tells me that this is the best time of my life and to really cherish these moments, I might just burst. I had very romantic visions of motherhood, just like marriage, and it’s really hard. With teething and developmental leaps, I often find that my 2 minute bathroom break is the most relaxing moment of my day. Where did my life go?

Regardless of what parenting model you subscribe to, there’s no doubt that, as a new mother, you’re carrying a template of how you “should” feel and how you “should” be raising your baby. More than that, you’re carrying a belief that you have to do this perfectly, and if you falter in any area – feeding, sleeping, work – you’re failing as a mother. It’s the sense of failure that erodes the joy of this time more than anything else. And it’s the juxtaposition between the societal expectations and the reality that is often at the root of the sense of failure.

But the failure here is more than just false expectations; the entire structure of the culture is a setup for failure. At the root of this setup is that we’re not supposed to raise our babies alone, and the expectation that two people at most are supposed to be able to handle the onslaught of responsibility and erosion of time and freedom that having a baby constellates is unrealistic at best and damaging at worst. We are supposed to be raise our kids in community, and in the absence of the circle of women who should be helping the new mother, women expect their partner to fulfill this role. How can one person fill the spot that an entire community previously held? It’s an impossible situation, a recipe for conflict, disappointment, and resentment in all directions.

The saying “It takes a village to raise a child” took the world by storm several years ago. It hit a chord because it resonated in the deepest chambers of YES: we know we’re not supposed to be doing this alone. Mothers need other mothers. They need aunts, cousins, sisters, and grandmothers. Fathers need other men, the ones they would have talked to during their days out in the field or forest, to know that what they’re experiencing is normal as well. We can’t truly know ourselves in a vacuum. This is true for all transitions, for life itself, but when it comes to the transition of parenthood our cultural disconnect has far-reaching and often detrimental ramifications.

In some other time, in some other place, I would walk over to your house and sit with you on your couch. Perhaps, after we talked a bit, my body close to yours in the ancient bond of motherhood, I would give you a quick sling lesson and we would bundle up your baby and walk the neighborhood. We might talk or not talk; the connection of being in each other’s presence would be enough. My older kids might join us, offering you a window into the future and the increasing spaces of ease that arise as kids grow older and develop more independence. And in the presence of your baby we would all revel in the delicious miracle of a newborn, this precious stage that only lasts a moment in time. The pain of the passage of time to which we, as highly sensitives, are more highly attuned – the awareness that with each new stage we say goodbye to what is no longer – becomes slightly less painful when we witness each other’s stages. When we live in community, we’re held in a common web. The invisible structures that connect all of us become more visible. And in this holding, in this witnessing, we know that we’re okay.

When we returned back to your home, before saying goodbye, I would pull your husband aside and say to him: “I know you’re exhausted and overwhelmed, too. I know how hard you’re working to provide for your family. In some other time, that would be more than enough. But it’s not enough anymore. Your wife needs you to share in this experience with her as much as you can. Ask her two questions when you arrive home from work: How are you feeling? How can I help? It will change your marriage, and possibly even save it.”

Alas, this is not how it goes. This is not the world most people live in. And, sadly, I don’t have a solution. If I could wave a magic wand I would transform our world into neighborhoods connected by walkways and riverways, eco-villages where people are invited to connect with one another in the old ways. In light of this, perhaps it takes a slight edge of pain off to know that, when you enter parenthood, you’re being setup for pain and disappointment, and that there’s nothing wrong with you or your baby or your marriage if you’re struggling with any aspect of this transition. It’s supposed to be hard, but it’s not supposed to be this hard. It’s supposed to rock you to your core but you’re supposed to be rocked in the arms of other women who can soothe you with their hard-earned wisdom. In this absence, all you can do is trust that you will get through, your baby will be fine, and that in the end it’s the love, the commitment to learn, and the desire to grow through these challenges that will be more than enough to get all of you through to the other side in one piece, and perhaps even softer and more compassionate because of it.