“The Wisdom of Anxiety” is Coming Down the Birth Canal 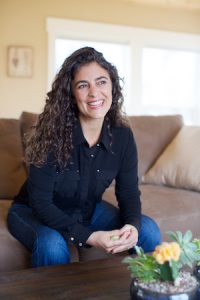 In April 2015, I had a dream while on vacation in Los Angeles: Robert Johnson, the Jungian analyst who has informed so much of my work, came to me and said, “It’s time to write another book and it’s mostly written.” I woke up, faithfully wrote it down as I do with most of my dreams, then filed it away in some far-back recess of my mind.

I had no desire or intention to write another book at that time in my life. I was happy seeing clients and creating courses, and the idea of a book felt draining and daunting. Mostly, I knew that when I did write another book I would have to be prepared to leave the safety and solitude of our quiet life and re-enter the world in a bigger way, and I wasn’t ready to do that. My primary focus at that time was still very much my children. They were 6 and 10 years old, and I knew I wasn’t ready to separate out from them quite yet.

Time passed. My kids got older and more independent. As I’ve said many times with motherhood, especially to new mothers who are submerged in the underwater overwhelm of those early months and years when kids’ needs are high and paramount, with each notch of their own independence, you gain a little piece of your own self back.

So I waited. I tracked my dreams. I noticed an interesting longing arise from time to time: the longing for a third child. But as I’ve written about on this blog, my husband and I both knew that we were done at two. Still, longing and knowing are often two separate streams, and I knew that if I followed the longing down the river of its becoming instead of taking it at face value (ie – we have to have another baby) I would arrive at the core.

What am I longing to birth? I asked myself. What creative passion is longing to gestate in the womb of my being? I wondered. As a woman, it’s so easy to siphon off all of our longing for creative experience and expression into conceiving a child, birthing a child, then raising a child. We mistakenly believe that we will feel fully fulfilled through the path of mothering. But it isn’t so. Our children can occupy centerstage for a period of time, as they must, but eventually the spark of our own soul longs to be lit into flame. We long to dance at the water’s edge with the muse of our imagination. We long to stand in the fields, painting out our dreams.

Eventually, it became clear that what was longing to be born was another book. As soon as I opened the door for conception, the words began to pull at the edges of my dreams. They stirred in the beginnings of consciousness. And as if to confirm the tug, nearly the minute I reached out to a friend to ask about the possibility of editing (I was considered self-publishing), she connected me with an editor at Sounds True, and everything inside of me sang yes to the prospect of this publisher being the home for my next book. I had followed their work for over two decades, and their MP3s has shaped my psyche and path in many ways.

Still, I delayed. As it goes with the birthing process, there are contractions and expansions, and I watched myself contract almost immediately after having lunch with the editor as I realized that I still wasn’t ready to leave the womb of our home. And when I say “leave” I don’t necessarily mean literally leave, as writing a book these days doesn’t require as much travel as it once did. What I mean is transferring my focus, which had been primarily on my kids for so many years, back onto myself and a new “baby.” But eventually, as I listened and dreamed and wrote, the expansion rose inside of me and I knew that the time had come. I wrote to the editor at Sounds True, we started the proposal process, the contract was signed, and I threw myself full-heartedly into the writing process.

As Robert Johnson said, the book in its basic framework was, indeed, mostly written. The reality is that the seed for had started to gestate twenty-six years ago when, at the age of twenty-one, the god Pan swept me into his wild forest in the form of my first panic attack. Pandemonium ensued, which was exactly the plan, and the beginning of a life’s work was born. I’ve spent the last ten years writing a weekly blog post, which has synthesized disparate elements of my work around transitions, relationship anxiety, and anxiety in general, and I thought my “mostly written” book would easily receive my editor’s first stamp of approval.

But when I submitted the first draft, which was a patchwork compilation of many blog posts, she said, “The content is fantastic, but it doesn’t hold together. You need to weave it into a book now.” (She said it much more poetically than that :)). I breathed into the initial feeling of overwhelm and all of the accompanying voices of resistance that wanted to tell me that I couldn’t do it and dove headfirst into the material.

And that’s when this baby was truly and joyfully born. I wrote late into the night, moon and stars as my guides. I awoke with the sunrise fire of creativity lighting up my soul, and I wrote. Sentences dropped whole as if from clouds, transitions between sections became clear against the blue sky of my mind, and images pushed like bulbs pushing through the ground of being. Once surrendered, the writing flowed deliciously through from bone to blood to heart to hand and onto the screen. I sent back a draft a few weeks later and we knew it was a yes.

Eighteen months later and the book, The Wisdom of Anxiety: How Worry and Intrusive Thoughts are Gifts to Help You Heal, is now a few weeks away from its May 28th official birthday.

I hope you will join me as we welcome this book into the world. Over the past several weeks, as the birthday approached, I’ve imagined the book with wings flying into the hearts and souls of anyone who would benefit from the words. As one of my dear clients said to me last week: “I’m seeing the books in their boxes, excited to come into the world.” I loved that image, and later that night I wrote a prayer-letter to the books, imagining them shimmering excitedly in their boxes, ready to deliver their messages.

If you would like to join me in this celebration and release the books from their boxes, the best way to purchase and support my work is through Amazon, as it helps the pre-order algorithm kick into gear, which you can do here. If you would like to order from another bookseller, you can do so through any of the links that appear on this page.

Dear readers, clients, and course members: Thank you for your support over the years. As I say in the acknowledgements, this book would not exist without you, for while the seed began to gestate all those years ago, much of what you’ll read in these pages stems from your willingness to share your heart and soul so vulnerably with me over the years. Alongside my children and my Jungian guides, you have been my greatest teachers, and it is my deepest wish that anyone who suffers with anxiety and intrusive thoughts will benefit from the wisdom that we have gleaned together.

With so much love,