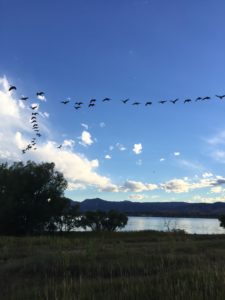 The recent theme that showed up in both spheres is what happens when we drop underneath the content of words or story and respond instead to the emotional and spiritual layers. If one of my sons is upset and I try to convince him out of his feelings by going straight to a solution, the tension escalates. But if I’m able to validate the emotion underneath, he feels deeply heard and the charge softens.

This showed up in one of my small groups last week, and the conversation touched so beautifully and succinctly on this crucial piece of how to respond in the moment to an intrusive thought that I felt compelled to share it here (with the member’s permission). This group member is deeply connected to creativity, and you’ll hear in the following transcription that poetry falls from her lips when she speaks. When we’re in the realm of the poetic, we’re also in the realm of soul, and that’s often when a teaching that you’ve heard dozens of times drops down from head to heart and finds more integration. I hope you have that experience here.

“What did it feel like when you were in that dropped-in space and you had that sense of knowing?”

“It feels like sort of this timeless space that I can tap into. It feels like this sense that everything is going to be okay, and it feels like a cosmic holding of some kind. Like a mother energy. Trusting life, I guess, and how it wants to move. I spoke recently about how I’ve been having a lot of death anxiety, and I’ve been using this mantra – because my mom was so resistant to death or grief and I think I inherited some of that – but I’ve been trying to tell myself, ‘Death is natural.’ It helps me loosen something, and I think that’s connected to life. Something that I’ve been holding onto is wanting to stop time and not move, but this other space is a feeling of a cycle that’s much bigger than me, and somehow this feeling of okayness. And also a lot of beauty in the idea of having a baby. I feel glimmers of excitement but then I feel this inner predator or critic who takes it from me and says, ‘You’re just being selfish. You want to believe in the goodness because you want things to go well. You don’t get to have that.’ That’s what comes really strong. But before that I feel a sense that there’s some kind of divine continuity.”

“Yes, so beautiful. This place of trusting that it’s all okay, it’s going to be okay, there’s an unfolding, there’s a timeline that’s bigger than you are, it’s life happening, trusting in life happening. And then the other voice comes in: ‘Who are you? You don’t deserve good things.’ So it’s this wrestling between a very spacious, trusting place – connected to the divine – and that scared place that tells you lies and is very mean and doesn’t believe that you deserve to take your place in the ancestral line? To be in life unfolding? For good things to come?”

“Yes, all of those things. That it’s selfish.”

“Yes, and that shame voice is a protector. Then relationship anxiety comes in as the next protector. Protecting you from how vulnerable it is to be in that other space. The space of goodness. How unfamiliar it is. The other one is much more familiar – you don’t deserve good things – that’s been the running commentary for a very long time. So the other place is going to feel unfamiliar and then by definition it’s going feel threatening because it’s unfamiliar. It’s growing that new pathway in the brain and in the soul that learns to trust in a different story. ‘What if do deserve good things?’ What if that shame story really isn’t yours, and that’s also part of the ancestral link – to put that shame story aside and put it in its rightful place, which is somewhere way back beyond you.”

“I think you named it. This wrestling between these two spaces. The one feels more familiar to me, but I’ve been journaling every day for three years with this loving mother character who I didn’t trust at all at first, and now sometimes I don’t trust her but more often than not I think, ‘Well, she’s saying something that sounds pretty good. Even if it’s not true, it’s soothing.’

“And now I notice the anxious voice popping up to what you just said. It’s saying, ‘Well, but that’s just because you’re avoiding the truth and you’re spiritually bypassing.’ What should I say to that?”

This is the moment when I often turn a question back around to the client. She wants me to step in as her wise parent but I know – because I know this woman quite well – that she’s more than capable of accessing her own wisdom. And so I say, “What might you say? I’m going to put it back on you.”

This is often resistance to connecting to one’s own source of wisdom, the longing is so great for someone else to play the role and be that voice.

“It’s there,” I encourage her.

“I think part of the problem is trying to argue with it and get into litigation with the voice and defend myself so I think I would just say, ‘It’s safe to trust.’ Which is sort of a bigger trust.”

“Well, I think it quiets down. It often comes up with other stories, but I’m understanding trust more deeply now.”

“It sounds like you’re experiencing it more deeply now at a somatic level, not just in your head. It’s dropping in.”

“Yes, yes. It’s like trusting something bigger, which I’ve said for a long time, but now I’m feeling it.”

And we could all feel it in that moment. Through breath and silence, she brought us into the timeless space of trusting in life unfolding, trusting that everything is okay.

Here’s the bottom line: When the anxious voice pipes up no matter what the storyline is – relationships, health, fertility, death – if you respond to content you’re going to be going back and forth in litigation, and you will lose because anxiety is smarter. It will always find another angle, another story. And this is also a parenting tool, it’s inner and outer parenting: if you respond to the story, you’re going down the drain. If you respond to the emotion, if you respond to what’s underneath with empathy – “I understand you’re so scared right now. I get it. I’m with you. And it’s okay to trust” – then something softens inside and people find their own wisdom. We all need – almost more than anything else – to be understood, to be heard, to be seen – all parts of ourselves. But not from the words, not from the content, from what’s underneath.

Here’s the audio version of this last part:

Where does this land with you? What do you notice when you respond to intrusive thoughts with empathy for the feelings that live underneath. (Hint: these feelings will almost always be some version of fear, grief, or vulnerability/groundlessness.)