This is What Often Unleashes Anxiety and Panic 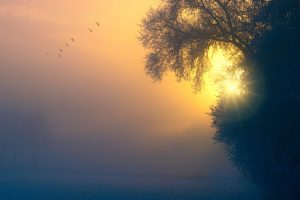 As I’ve shared many times, the panic attack that dragged me into the underworld of my unearthed pain and initiated me into the landscape of anxiety that would become my life’s work occurred at age twenty-one, three months before graduating from college. What stands out in that previous sentence? It’s the piece that many therapists miss when they’re working with anxiety, intrusive thoughts, and panic attacks: What transition was the client in at the onset of the first attack?

I was three months away from leaving college and entering the terrifying decade of my 20s. I had no idea what I was going to do with my life, no career plans, no job leads. The vast unknown of “the rest of my life” sprawled out before me like a dark and menacing sea, roiling with the words “uncertainty” and “ambivalence” pitching in the waves. Through the fissure of this vulnerable state, my unshed grief and unacknowledged pain – the shadow realms that I had successfully stuffed below the veneer of polished perfectionism and the invulnerable story that said “my life is great” –  came roaring to the surface in the form of a panic attack. Energy can only be stuffed down for so long; eventually, it reaches a breaking point and pops out the top in the form of anxiety and panic. This is often when our inner work begins.

Why is it so important to understand the link between anxiety/panic and transitions? Because if we don’t have a context in which to contain the first attacks – and often each subsequent attack – we’re more likely to try to attach an erroneous interpretation to them like, “This must mean I’m in the wrong relationship” (relationship anxiety) or “This must mean that I’ve caused harm and don’t remember” (harm anxiety). The archetypal anxiety themes are placeholders for the pain that needs attention, and while it can be beneficial to explore these themes from a depth psychological perspective where we unpack the metaphor (never taking them at face value), it can also be beneficial to put the content of the thought aside and instead recognize the pain and needs that are clamoring for attention.

This is why one of the first questions I ask a coaching client is, “What transition were you in when the anxiety or panic first showed up?” I’m asking this question both regarding the current manifestation of anxiety and also in terms of how anxiety first showed up as a child. These are the most common transitions that unleash anxiety, intrusive thoughts, and panic attacks:

As I wrote in The Wisdom of Anxiety:

Most people struggle to some degree through the major milestones in life—kindergarten, adolescence, graduating from high school and going away to college, graduating from college, starting a career, getting married, having a baby, buying a house. Those who are more sensitive, because they’re acutely aware of the fleeting and ephemeral nature of life punctuated by the fact that loss and death exist, feel the daily death-and-rebirth transitions more acutely than the average person. This means that transitions both small and large—dawn and dusk, anniversaries, the change of seasons, birthdays—need to be honored and acknowledged in order for well-being to exist.

While some people can go with the flow during life’s changes, most people experience change as a death experience, which leaves unfinished transitions carrying the seeds for future pain. Change can be enormously disruptive. Therefore, an important step in healing our anxiety is to undergo transitions consciously and take steps toward repairing the effects of the unhealed transitions from the past.

What’s essential to understand is that it’s not the event itself that triggers anxiety; rather, it’s the absence of emotional support and cultural rituals that lead to anxiety. We’re designed to go through transitions; in fact, we’re designed to grow stronger and more resilient through the death-and-rebirth experience that transitions activate. But without loving arms to hold us through pain and time-honored rituals to contain the loss, the emotions can’t cycle through to completion and instead morph into anxiety, intrusive thoughts, and panic attacks. Intrusive thoughts, in particular, become the scaffolding that a child or young person latches onto to try to gain solid ground in the out-of-control experience of surrendering to the tidal wave of loss set into motion by the transition.

The work here is multi-layered: Both to identify the transitions that were occurring when anxiety and panic first hit as a way to contextualize and contain the emotions so that you don’t assign incorrect interpretation to the symptoms and to do the inner work that allows you to repair the unfinished transitions from your past so that they don’t need to keep re-emerging in the present. This includes journaling, bringing the transitions to therapy and allowing yourself to grieve through the old losses, and creating healthy rituals to contain the loss activated from each one.

What were the transitions that unleashed your anxiety, intrusive thoughts, and panic? What transitions are you currently in that may be exposing and/or amplifying your anxiety? Share in the comments below.