This is What Strikes Me About Relationship Anxiety 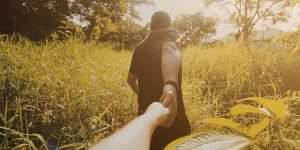 Through the Break Free From Relationship Anxiety course and then the weekly group, they’ve been able to recognize and name their intrusive thoughts and projections more quickly, which prevents them from spiraling down the rabbit hole of anxiety. The group began as a 6-week experiment to offer people more personal guidance around their relationship anxiety and has continued for nearly two years. It’s been a truly special experience.

But here’s the thing… we rarely talk about relationship anxiety.

Why? Because, as I often teach, relationship anxiety is a portal into other areas of our lives that need attention. Intrusive thoughts, like all forms of anxiety, are distress flares shining a light on past and present pain that is buried beneath the busyness of our lives and the messages we’ve absorbed about high sensitivity. As such, a typical conversation might go like this (this is not an exact conversation):

“I had the attraction spike last week. I was noticing other women and that shame voice came in that said, ‘If you really loved your wife, you wouldn’t be noticing other women.’ And then I got stuck in an anxious spiral of thinking I married the wrong person.”

“Let’s first remember that it’s okay to find other people attractive; that’s part of being human. [Cognitive splash of truth water] But you already know that. So let’s talk about what else is going on in your life that might trigger the attraction spike.”

“Well, one of my best friends is having a very hard time. I haven’t seen my parents in months because of the pandemic. We’re about to close on a house. And I’m having some challenges at work.”

“That’s a lot. And what happens when you drop out of the head space of anxiety and allow yourself to feel what’s happening in your body about these challenges and transitions? Can we take a few moments to breathe and drop in?”

“What do you notice about your anxiety now?”

“Did any of this have anything to do with your wife?”

“No. Except that I’m so grateful that she’s in my life.”

This is a condensed version of a conversation that might take twenty minutes or so. As you can see, other than an initial splash of cognitive truth, I don’t give any airtime to the initial attraction spike, for what we know about intrusive thoughts is that the more you water them, the more they grow. The thought is a portal and protector, and when we name the protector we can walk through the portal and attend to the vulnerable and valuable feelings that are embedded inside the thought.

After each person shares in the small group, I open it up to the full group so that others can offer support, validation, or sometimes just the magic pill shame normalizer phrase, “You’re not alone. I struggle with that, too.” When the person who shared hears these words, I hear a deep exhale.

The second thing that strikes me about relationship anxiety is how much of it is soothed by sharing in the company of others.

We could say the same thing about all forms of anxiety: there’s something medicinal that occurs when you gather with people who are struggling in the exact same way that you’re struggling. And it’s not enough to have people in your life that may struggle with anxiety in general. If it’s not specific to relationship anxiety, they’re not going to understand what you’re going through.

But the people who find their way to my work understand. They know in their bones what it is to hook onto a thought that you’re with the wrong partner. They know in their heart the agony of believing the attraction spike and wandering down the dark alleyways of fantasy that tell you that you wouldn’t be feeling this way with someone else, someone to whom you were “more attracted” or with whom you felt “more in love”. They know in their soul what it is to be jolted awake in the middle of the night, heart racing and throat closing, with the telltale feelings of anxiety and the automatic interpretation of, “I’m with the wrong partner.”

And they know the loneliness of carrying the weight of this particular brand of anxiety without being able to talk about it with anyone in their life. They know what it is to share it with a therapist only to be told, “Doubt means don’t. Maybe you’re with the wrong person.” Which is why the healing power of being in a group of people who carry your brand of anxiety has becoming increasingly more evident to me over the years of doing this work.

This is why I decided to start a live version of the course that I’ve offered since 2010. I can’t offer small groups to my entire audience, but I can offer larger coaching calls where people struggling with relationship anxiety can engage in real-time and receive direct guidance from me throughout the duration of the course. The coaching calls in the first live round last June were alive, meaningful, and transformative, and I have no doubt that they’ll be the same in this upcoming round.

Which brings me to the third thing that strikes me about relationship anxiety: it’s resolvable.

This is not what the mainstream literature that is largely based in CBT will tell you, but it’s what I’ve seen in the twenty years of doing this work: when you address the symptoms at the roots instead of only seeking to eradicate them, they abate. This doesn’t mean that you’ll never have an anxious thought about your relationship again. That’s like saying that just because you learn more about healthy conflict resolution you’ll never have an argument with your partner again. That would be nice, but it’s not how real life works! What it does mean is that, like the members of my small group, you’re able to respond more quickly and effectively to the intrusive thoughts, which allows them to fade away

I’d love to see you on the next live round of the Break Free From Relationship Anxiety course, which starts on November 15th. If you’re already a course member, you can sign up for the six coaching calls on this page. And if you haven’t taken the course, you can sign up here as well. The benefit of going through the live round, in addition to the coaching calls, is that you’ll be guided step-by-step through the course material with weekly emails directly from me where I highlight key exercises and bring your attention to the questions and topics that are most salient. This is a densely packed course, for healing at the root isn’t a simple 3-step procedure that I can explain in a few short videos. This course is the culmination of decades of work with relationship anxiety, and it’s helped thousands of people break free and find their clarity and serenity. I look forward to meeting you there.

Here are the times for the six group coaching calls (subject to change). Note that only about 1/3 of the participants are able to make each call, and you’ll receive a recording of the call immediately afterward: