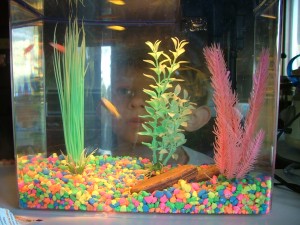 So we followed through on our promise and bought three little glo-fish for Everest. One of them is, of course, named Mocha, and he insists that she’s the reincarnation of our cat who died last spring. In case you’re new to the blog, part of helping Everest prepare for Mocha’s death and helping him with his own transition of losing his first beloved pet included long discussions about what happens when we die. Everest created his own mythology about a place called “the kitten crane” where Mocha would wait until she found her new cat body and reincarnated as a kitten. We had every intention of getting a kitten, but when my husband’s allergies cleared up in Mocha’s absence to the point of stopping all of his medication, we had to put health first and told Everest that the kitten would have to wait.

Everest seemed to understand, but the brain of a six year old isn’t a rational place, and a couple of months ago he started focusing on death and developed a pretty serious fear of the dark. As he was falling asleep at night he would see scary shapes, skeletons, and black holes. He started talking about death a lot and we did our best to educate and comfort him. But, again, nothing we said rationally touched the very real emotional and spiritual hole that was left in the wake of losing Mocha with no completion to the death-rebirth process. A part of him was waiting for Mocha’s return, and until she came back in some form, he felt bereft, like there was a hole left inside him.

At least that was the theory behind my husband’s late-night musings on how he felt in the aftermath of losing his father when he was eighteen. He wrote me beautiful email and we decided that we needed to follow through on our agreement and get Everest a pet. He had been asking for a fish, so I got over my resistance to cleaning a fish tank and off we went the next day to find Mocha’s next incarnation.

The effect was immediate. Everest spent the morning prior to going to the pet store happily engaged in his story about Mocha leaving the kitten crane and descending to Earth. I never know with Everest how much of his story he believes, but it doesn’t matter; in his imagination, Mocha was coming back. He was all smiles on the way to the pet store and gleeful about every step of the process, from picking out the aquarium and accoutrements (gravel, plastic plants, fish food) to selecting the fish. He helped me set up the aquarium (he really did the whole thing himself, little engineer that he is) and held his breath as we gently poured his three new friends into their home. He’s been happily taking care of the fish ever since.

But the real question was: Would the fish resolve his fear of death and his scary nighttime visions? I’m a bit in awe that the answer is yes. Ever since Mocha arrived, his nighttime fears have vanished. It’s extraordinary, to say the least. But is it? Doesn’t it make sense that he needed the completion of the transition process that we had discussed at length? It’s a basic premise of transitions and it’s often a lifeline for those in the letting go/death stage of a transition when things are hard : where there is death, there is rebirth. Where this is hopelessness, there is the possibility of hope. Where there is autumn and winter, there is spring. Some things have to die in order for other things to be born. A piece of Everest’s puzzle that was missing for months has now been put into place. His mind, for now, is at peace.