Walking the Labyrinth: A Birthday Ritual 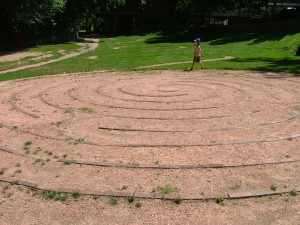 “Your life is a sacred journey. And it is about change, growth, discovery, movement, transformation, continuously expanding your vision of what is possible, stretching your soul, learning to see clearly and deeply, listening to your intuition, taking courageous challenges at every step along the way. You are on the path… exactly where you are meant to be right now… And from here, you can only go forward, shaping your life story into a magnificent tale of triumph, of healing, of courage, of beauty, of wisdom, of power, of dignity, and of love.”

Birthdays are often a time of year when I yearn for an ancient spiritual community who can guide me or those around me through the rituals that they’ve enacted for thousands of years. The traditional American birthday rituals  – opening presents, having a party with balloons and cake – is fun for kids but in and of itself is meaningless without a ritual of some kind to support it and to help the child transition to the next age. It’s like having a wedding reception without a ceremony.

As I was lying next to Everest the night before his sixth birthday, the image of a labyrinth appeared in my mind. Everest loves mazes, and while a labyrinth is not a maze, it’s a physical ritual that I thought he might enjoy. The next day, I explained it to him and asked if he might like to walk a labyrinth. He said yes. I also explained that birthdays are special times of year – like the solstice and equinox – when we can ask for help in letting go of part of ourselves that are difficult and invite in parts of ourselves that we’d like to expand.

Here’s what the Lessons for Living website says about labyrinths:

We are all on the path… exactly where we need to be. The labyrinth is a model of that path.

A labyrinth is an ancient symbol that relates to wholeness. It combines the imagery of the circle and the spiral into a meandering but purposeful path. The Labyrinth represents a journey to our own center and back again out into the world. Labyrinths have long been used as meditation and prayer tools.

A labyrinth is an archetype with which we can have a direct experience. We can walk it. It is a metaphor for life’s journey. It is a symbol that creates a sacred space and place and takes us out of our ego to “That Which Is Within.”

Labyrinths and mazes have often been confused. When most people hear of a labyrinth they think of a maze. A labyrinth is not a maze. A maze is like a puzzle to be solved. It has twists, turns, and blind alleys. It is a left brain task that requires logical, sequential, analytical activity to find the correct path into the maze and out.

A labyrinth has only one path. It is unicursal. The way in is the way out. There are no blind alleys. The path leads you on a circuitous path to the center and out again.

A labyrinth is a right brain task. It involves intuition, creativity, and imagery. With a maze many choices must be made and an active mind is needed to solve the problem of finding the center. With a labyrinth there is only one choice to be made. The choice is to enter or not. A more passive, receptive mindset is needed. The choice is whether or not to walk a spiritual path.

At its most basic level the labyrinth is a metaphor for the journey to the center of your deepest self and back out into the world with a broadened understanding of who you are.

Then I googled “labyrinth Boulder” and found several public ones, not surprisingly, close by. I was surprised, however, to learn that there was a public labyrinth just behind the library, next to Boulder Creek. We’ve been there dozens of times; how had we never seen it? On the way there, we talked about things that Everest might think about letting go of as he walked to the center of the labyrinth and things he might expand upon as he walked out. He said, “I want to let of whining so I can fill your bucket” (from a wonderful children’s book about practicing kindness). He thought for a few more minutes and said, “I want to try to be more flexible when Asher wants something of mine.” We parked, put Asher in the backpack sling, and held hands as we walked the path along the creek. We passed under the library bridge and there it was. Everest let go of my hand and wasted no time getting started. 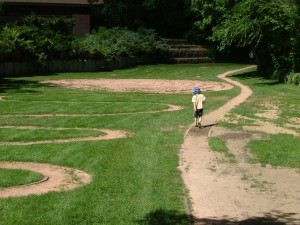 I followed him at a distance as I wanted to allow him to have his own private journey. There were two paths to choose from and he intuitively chose the path that led to the center of labyrinth. We walked in silence. I thought about how big my boy is becoming. I have no idea what was passing through is mind. He didn’t say a word (rare for him) until he reached the center. 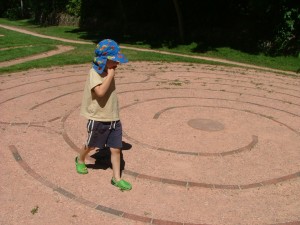 “Come on, Mommy!” And then he started his journey back out. 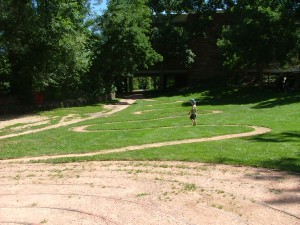 When we all finished, we walked down to the creek and doused ourselves with water (a common purification ritual). I didn’t say anything about the meaning of the labyrinth or the water; the meaning was embodied in Everest’s experience and didn’t need to be made conscious for it to do its work. 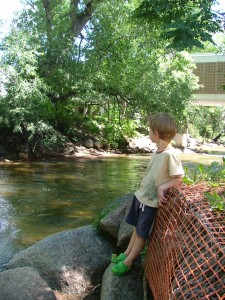 Everest turned six yesterday. Six is a threshold year in that it initiates the stage life we think of as boyhood or girlhood: the grade school years, the kid years. He’s no longer a little kid but certainly not an adolescent. I’ve heard these years referred to “the golden years of childhood” and I think, to a degree, its true. Through the struggles of the last few months, Everest has emerged more fully into himself, incorporating a level of maturity that we have never seen before. Hopefully, walking the labyrinth concretized some of this growth on an unconscious level and will aid him as he walks into this next stage of his life.