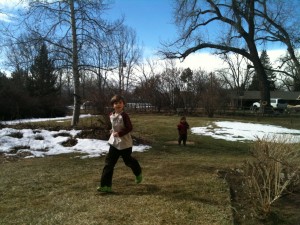 People often ask us why we homeschool. I used to launch into a long-winded answer about how we never planned to homeschool but by the time Everest was two it became apparent that, because of his high emotional and moral sensitivity and his asynchronous learning style, he would be crushed in any traditional school environment. I used to talk about our attached parenting style and our belief that kids need to be with their parents much longer than our culture encourages. I may have said something about our outdated educational paradigm and the dangerous focus on extrinsic learning through punishments and rewards. I would often find myself over-explaining because the reasons were too complicated to condense into a single sentence. But recently I have found the sentence that distills our reasons into five words, and now I simply say: Because we believe in freedom.

We believe in freedom of mind. We believe that our sons, like all children, have an innate desire to learn. Just as we didn’t teach them how to sit, crawl, stand, walk, and talk, so we don’t believe that have to “teach” them how to read, write, and add. Kids are born as scientists, explorers, builders, and architects. They want to know how the world works. Like the creeks and streams that feed the oceans, the ocean of a child’s mind is fed by the tributaries of her inborn passion. Every child is born with a passion, a calling, a genius, and we believe that it’s their birthright and our obligation to nurture that calling as soon as it manifests so that our kids grow up knowing who they are with a deep-seated sense of purpose about their place on this planet.

Before Everest turned two, his passion for airplanes, rockets, and all things flying became abundantly evident. By the time was three, he could tell you how a turbo-jet engine worked. Now, at seven, he’s designing both household contraptions and inventions to save the planet. Asher, on the cusp of three, is passionate about bugs, dinosaurs, animals, language, music, and theater. (You can watch his first performance here.) Inspired by his big brother, he also loves science and comes alive when Everest teaches him about the microorganisms he can see through his microscope. Both of their minds are brimming with ideas, stories, and an unbridled imagination. Aside from some homeschool workshops and private science mentoring one morning a week, they spend their days free to explore their interests and follow the creeks and rivers of their passions. They spend their days playing with each other and inventing rich games where they’re often flying through outer space on their homemade rocket as Everest explains the concept of a black hole while Asher yells, “Look, there’s Jupiter!” In essence, they spend their days being free.

We believe in freedom of body. We believe that our kids shouldn’t have to ask permission to go to the bathroom, to get a drink of water, or to eat only when the bell says they can eat. We believe that kids (especially boys) need to move a lot and often learn best while they’re moving. We believe they need to be allowed to follow their own rhythm, that there’s a natural inhale and exhale that permeates the hours but is unique to each child, and when a child is forced to comply with a set of rules designed to keep thirty kids in order, they lose connection to their rhythm and their needs. Both of our boys happen to be night owls, and we’ve often said that the one of the main reasons we homeschool is so we don’t have to subject them to the pain of forcing themselves awake at the crack of dawn. They can stay up until 9 or 10pm and sleep until 8am. This is their natural rhythm. We’re still in our pajamas as we watch the school bus lumber down our road to pick up the neighborhood kids.

We believe in freedom of spirit. There’s a spaciousness to our lives that can only exist when our time is our own, and when there’s enough time to lean into the minutes until they extend into hours knowing that we don’t have be anywhere but here. We rarely rush. We move slowly in the mornings and have time to greet each other with prayers and inquire about our dreams. Some of my favorite times are those early morning hours when my boys are wrestling on the bed while I sit with my computer and catch up on emails. We pause to look out the window and observe the effects of last night’s weather: the blankets of freshly fallen snow; the rustle of windswept leaves; the rabbit, who we’ve named Funny Bunny, hopping across the grass in search of a snack. Sometimes, before we get out of bed, we hear the hooting of the owl. We have time to notice these things. It’s a slow life that allows for a fullness of spirit that arrives when we observe the beauty in the world around us. As Eckhart Tolle writes in his beautiful little book, “Guardians of Being: Spiritual Teachings from our Dogs and Cats“,

But to be aware of little, quiet things,

you need to be quiet inside.

A high degree of alertness is required.

Bring awareness to the many subtle sounds of nature –

the rusting of leaves in the wind,

the humming of an insect,

the first birdsong at dawn.

to the act of listening.

there is something greater:

a sacredness that cannot be

Look at a tree, a flower, a plant.

Let your awareness rest upon it.

How still it is, how deeply rooted in Being.

Allow nature to teach you stillness. 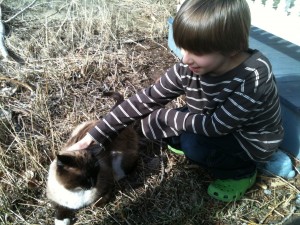 Along these lines, the spaciousness of the homeschool life allows for time to follow a project to completion. If Everest wants to spend seven hours exploring how electricity works (which he’s been known to do), that’s what he does. Again, there are no bells demanding that he stop, clean up, and set the project aside just when he’s diving into the heart of the matter. How can we truly nurture the creative mind when we’re limited to 45 minute blocks of time? Creativity thrives on the wing of formlessness; she wants to ride out her inspiration to completion and becomes frustrated by the stops and starts that punctuate a typical school day. Some of our most joyous days have been when all four of us are engaged in our own creative project and the unbounded hours invite the creativity to weave itself into one complete tapestry. The time is organic and fluid – two words that often define the homeschool life.

Two of the most common areas of wound I see in my clients are around self-trust (difficulty making decisions and the fear of making a mistake) and lack of fulfillment in their lives, especially around their work. Both of these areas are stamped out early in life by well-meaning parents who are culturally conditioned to believe that they need to control their kids’ eating, sleeping, playing, and learning and an archaic educational model that was originally designed to produce factory workers and thus retains many aspects of that original, cookie-cutter, institutionalized model. The bottom line is that our dominant parenting and education models are rooted in a philosophy of control instead of freedom; instead of instilling emotional self-trust and nurturing creativity and clarity of one’s calling we create self-doubt, confusion, and a sense of emptiness.

Now, I’ve never been one to draw definite conclusions and assume that one model is right for all kids or all families. Most of my friends’ kids are in school and thriving. There are many charter or alternative, play-based schools around the world that honor a child’s natural rhythm and encourage a healthy development of spirit and creativity. But I know what’s right for us. I know what resonates in the deepest recesses of my soul. I know that when I read statements like the following, every cell in my body sings, “Yes!”

“Our compulsory, factory-style, standards-driven education has become perhaps the largest single agent of childhood domestication. As I have already noted, students who are too untamed – and very little is fast becoming too much – are quickly subdued and brought back into the herd by means of bio-psychiatric labels and drugs. An argument could be made that these “misfits” are American society’s canaries in the coal mine, a human warning signal for what is in store for more and more children if we don’t soon pump more oxygen into the cultural air they are forced to breathe. The demands of high-stakes testing have forced schools to eliminate nearly every vestige of physicality, imagination and creativity from the curriculum; more than ever, classrooms are becoming places where kids spend their days like cloned sheep, grazing passively in a pasture of uniform right answers.”

And that’s why we homeschool: Because we believe in freedom.