Words from the Wounded Self 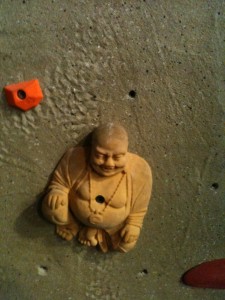 One of the most challenging steps in the healing process is de-fusing from the wounded  – or fear-based – self. Until you start to shine the light of consciousness onto the dark labyrinth of your inner world, you and your wounded self are fused into one seemingly seamless unit. If your core self is like your spinal cord, your wounded self is like a serpent wrapped tightly around this center line. Because you’ve been listening to the lies of the wounded self for a long time (usually your entire life), its voice sounds like your own voice; this is your running commentary.

The first step in de-fusing from the wounded self is to start to identify its lines: what’s the commentary that runs in the background of your thoughts, often so quiet that you can hardly hear it? (For a detailed explanation of the running commentary, please read this post.) For most people, the commentary usually contains at least one of the following negative mantras:

Along these lines, a member of the Conscious Weddings E-Course recently posted on this topic, using the brilliant analogy of recording music to help identify the voices of the wounded self. With her permission, I’m posting it here:

“I just wanted to chime in and say in the height of my anxiety after B & I moved in together, I started to think exactly like you in regards to “does this mean he is a lesson for healing but not marriage”. I started to think God was playing some awful trick on me. Kind of like teasing a dog with a bone by putting it right in front of their face and then taking it away from them when they reached out to enjoy it. Although I couldn’t see it at the time, now I can see that fear was most definitely in the driver’s seat, as it is for you. It’s a fear of loss. It’s a fear of losing him. It could also be a fear of deep down feeling undeserving of something good like this. Like KD mentioned, you have a lot to process, but what I think she meant by this is that perhaps there are things you were told about yourself by someone in your past (like your ex) that are deeply seeded in you and you don’t realize it yet. Things like, you are unworthy of love. You may not even be aware that that track is running in the background and playing a part in all your decision making.

“I was a musician for many years and spent a lot of time recording music. I’m not sure if you are familiar with the process, but in recording, every instrument including vocals goes onto it’s own track. Even each drum and cymbal would have it’s own mic and tracks. So once a song was complete, it was a combination of about 15-20 tracks all running together at once. Then, to perfect the sound, we would adjust and tweak each track in regards to volume so that it all blended together nicely. Sometimes, we had to eliminate tracks altogether if they weren’t fitting in with the song. I think of this when I think of my own thought process. Which tracks are loud? Which tracks are so quiet that you don’t even realize they are there at first? How are the tracks contributing to the song? Are they adding life and volume to it? Or are they making it cluttered and lacking direction.

“I had NO idea of the tracks I had running quietly in the background until I started listening for them. And they are prevalent in all areas of my life, not just my relationship, which was a huge eye-opener for me. I have been playing competitive hockey for the last 6 years and I am JUST realizing this now as I was starting to get anxious everytime I played and wasn’t enjoying it. I was eager to get off the ice just as quickly as I got on it. Then I wasn’t having as much fun with it and starting questioning if I loved it so much why was it making me so miserable?!? Thats when I started noticing the tracks playing in my head every time I was out on the ice. They were VERY quiet and I wasn’t even conciously aware of them at first. But they were saying things like “why are you even trying, everyone is better then you” or “you’re going to make a mistake and embarrass yourself” or “stop trying so hard, you’re not that good”. Holy crap, this was a HUGE eye opener to me. Where the heck did these thoughts come from? Truth is, they were there all along, they were just turned down very quietly. Now it’s my job to start putting the truth to these thoughts so that I can go back to enjoying my game.

“I quit playing music right when I was starting to go somewhere with it because I would get sick to my stomach before I went on stage and I couldn’t deal with the relentless anxiety. I let fear win that fight. It took one of my greatest passions away from me.”

What do you hear when you start to listen to those quiet lies that are wreaking havoc on your ability to enjoy your life? It takes courage to pull back the habitual protective layers that keep you safe inside a familiar box, and peeling back the lies is a healing transition unto itself. For once you start to identify your wounded self and call it onto the mat, it often feels like you’re falling apart. The serpent of the wounded self has wound so tightly around your true self that it feels like your core structure is crumbling when your loving actions cause the wounded self to loosen its grip. But with time, courage, and a commitment to living a loving and fulfilling life, you will be able to kick fear out of the driver’s seat and experience the joy and freedom of driving your own car.