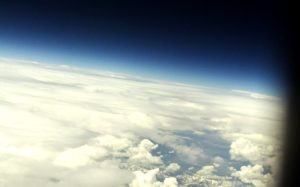 One of the byproducts of being a highly sensitive person prone to anxiety is that you tend to take on others’ pain and stories. This is particularly true if you had an enmeshed relationship with a parent growing up and didn’t learn to solidify the borders of your skin but instead became a porous sponge that absorbed the emotional world of your parent. But the tendency to take on others’ pain and stories is a common struggle for many people regardless of early relationships and speaks to being both sensitive and not having established a full well of Self. For when the waters in your inner well are low, there’s nothing to absorb the pings and bangs of life: every story pings and every pain bangs on those dry, hollow walls.

This often shows up in my work around relationship anxiety when a client struggling to understand the real nature of love and “in-loveness” will hear about someone who broke up with her partner because “she wasn’t in love enough.” Suddenly their friend’s story – even a friend twice removed – is now her story. Or the client who’s brother’s marriage just ended because “they just grew apart” and now he’s convinced that that’s how his relationship will end up. The intersection of sensitivity/anxiety and lack of accurate information creates a landmine of potential explosions; one false move and the anxious mind is now on fire with its story-building.

But it’s not only in relationships that this tendency to absorb others’ lives and pain shows up. It can show up in health anxiety (you hear of someone who has cancer and then you’re scared that you have it); in sexuality anxiety (you hear of someone who left her wife to pursue a relationship with man and suddenly you’re in full-blown sexual orientation spike); and in world anxiety.

I don’t know a single sensitive person who doesn’t feel anxious at times about the state of our world. How could it be otherwise when we’re flooded with every disaster, attack, illness, disease, famine, drought, natural disaster, animal extinction and calamity that befalls every square foot of our earth? We can limit the amount of negative news that we ingest (and I recommend it), but we don’t want to live with our heads in the sand and as soon as we come up for air our lungs are filled with the pain of the world. It’s simply too much to bear.

Consider Anne Morrow Lindbergh’s words in Gifts From the Sea (which she wrote in 1955; how much more information we’re flooded with today!):

“But just how far can we implement this planetal awareness? We are asked today to feel compassionately for everyone in the world; to digest intellectual all the information spread out in public print; and to implement in action every ethical impulse roused by our hearts and minds. The inter-relatedness of the world links us constantly with more people than our hearts can hold. Or rather – for I believe that the heart is infinite – modern communication loads us with more problems than the human frame can carry. It is good, I think, for our hearts, our minds, our imaginations to be stretched; but body, nerve, endurance and life-span are not as elastic. My life cannot implement in action the demands all the people to whom my heart responds. I cannot marry all of them, or bear them all as children, or care for them as I would my parents in illness or old age. Our grandmothers, and even – with some scrambling – our mothers, lived in a circle small enough to let them implement in action most of the impulses of their hearts and minds. We were brought up in a tradition that has now become impossible, for we have extended our circle throughout space and time.

Where can we start, Anne Morrow Lindbergh asks? We start with the here and now. We start with the center of the circle. We learn how to “deal with the individual… and the complexity of the present” instead of siphoning off our anxiety into the projection of the masses “out there.” In essence, we start with ourselves. We do this not with a navel-gazing, self-centered intention, but with the intention to fill our Well of Self so that we can serve our patch of earth in the way we’re meant to serve. People often say to me, “Isn’t it selfish to spend so much time examining my inner world and doing this inner work?” To which I respond, “Anxiety actually creates a very self-absorbed state. When you heal enough of your inner world and fill your well, you can then give from a place of fullness. So it’s the opposite that’s true: healing yourself is the least selfish thing you can do whereas when you’re stuck in your anxiety you can’t see beyond the stories that wreak havoc in your own head.”

By no means am I, nor do I believe is Anne Morrow Lindbergh, suggesting that we stop being activists in the outer sense of the world; we need every amount of effort, actions, and donations we can get/give if we’re going to heal our planet. Rather, what she’s saying is that our current global catastrophe is a byproduct of the mindset of separateness, fear, and divisiveness that we all carry. It’s so easy to pin the source of the problems out there on our political and world leaders. And it’s easy to avoid the battlefield in our psyches where fear and ego like to reign supreme by throwing ourselves into the battle to save the world. Whenever I think of this concept I’m reminded of the scene in the movie Hair where the political activist’s wife and young son are left standing alone while the man charges out to join the rallies for peace. If we don’t take care of ourselves, our relationships, the creatures that inhabit the land at our own feet, and the soil in our backyards, then on some level we’re perpetuating the very problems that we rail against.

Still, when the world breaks and bleeds, we are called to respond and act in some way. As a highly sensitive person, it can be overwhelming when every plea for help ends up in your inbox and you want to help everyone. We can’t help everyone; we can’t save the world. But we can choose one cause, either local or global, and direct some resources of time or money there.

In the dance of external and internal, at some point we come back to ourselves. People often ask me, “How do I fill my well of Self?” It’s a bigger answer than I can pare down to a few sentences, which is why I created my Trust Yourself program. If you’re ready to heal one of the core spokes of not only the relationship anxiety wheel but the generalized anxiety wheel, if you’re ready to learn from the inside out what it means to know yourself, love yourself, and ultimately trust yourself so that you can stop caring about what others’ think, absorbing their stories and develop a stronger internal compass system by which you can more easily make decisions, if you’re plagued by the fear of making a mistake and under the whip of your inner perfectionist, if you feel taken down into despair by the brokenness and pain in our world, please join me and a group of dedicated learners for this upcoming round, which will begin on Saturday, October 21, 2017. We can heal on our own, but we heal best in community.

You can learn more here: Trust Yourself: A 30 day program to help you overcome your fear of failure, caring what others think, perfectionism, difficulty making decisions, and self-doubt. I look forward to meeting you there.