These 10 Micro-transitions can Trigger Anxiety for Highly Sensitive People 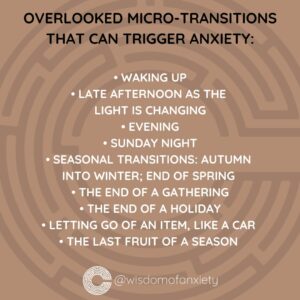 Highly sensitive people feel every moment of life: the joys, the sorrows, the in-between times, the beginnings, the endings, the far-off music in the distance, the emotional temperature in a room. This is a gift, but it’s often experienced as a burden because we’re told from an early age that we’re “too sensitive, we think too much, we’re too emotional.” So we learn to stuff away big feelings.
What goes unnamed often festers into shame. This is why it’s critically important to slow down and name the common yet overlooked times when highly sensitive people are attuned to the currents of loss and change that inform our lives, like the following:

All of the above micro-transitions often include a feeling of sorrow or longing or emptiness. Again, these emotions aren’t “bad”, but they’re often experienced as such because HSPs don’t learn early in life how to tend to their big and small feelings. The result is that instead of feeling the core feelings – the grief, longing, emptiness, joy, excitement, fullness – those feelings are squashed down and re-emerge as anxiety. Emotions don’t evaporate because they’re shamed. They simply change form. This is why so many of my clients talk about feeling anxious as a party is ending or a season is ending. They talk about their anxiety at the end of the day (the topic of episode 3 of the Gathering Gold podcast) or when they wake up in the morning (also a podcast episode topic). But when you soften into the anxiety and meet it with curiosity and compassion what you’ll find at the center is grief. And when you move toward the grief with a hug and a cup of tea, what you’ll discover next is joy. 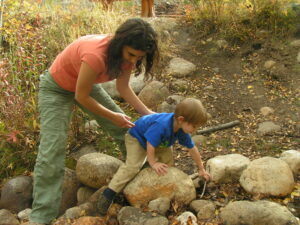 So here we are in autumn, the season of loss, longing, and nostalgia. What can autumn teach us about grief and loss?

Autumn brings into high relief the fleeting nature of life. The beauty is so beautiful and it stings because we know it only lasts for a few weeks.

Here in Colorado, Autumn is an especially short season where, for just a brief period of time, the natural world is lit in golds and greens and pinks and reds and oranges. It takes my breath away daily, sometimes hourly. It nourishes me just as much as it hurts.

Are goodness and loss always interwoven? For the highly sensitive person, I believe they are. It’s like looking at a photo of your child when they were young and feeling like you’re going to burst because they are no longer that precious age that they once were, and there is no going back. We try to capture it, now more than ever. We photograph and video incessantly hoping against hope that we can stop or at least stall time. But we know we can’t, and another part of us doesn’t want to because each age carries its own delicious beauty and sweetness. It’s as if the part of our hearts that fights against time wants to simultaneously stop it and see what’s coming next.

When I look on these photos taken sixteen years ago to the day, I’m filled with equal parts longing, grief, pride, and gratitude. I see the tenderness in my mothering; how closely I stayed to Everest’s two-year old, endlessly curious and adventurous self. I couldn’t know then the man that he would become – that sixteen years later I would be celebrating him on a beach in Florida as we toured college campuses. The tears that fill my eyes are wordless and nameless, encapsulating his lifetime and the gift of being his mother and more than we’re ever meant to capture in images or words.

So much depends upon

the passage of time. 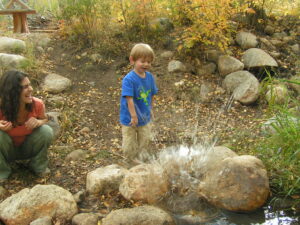 Autumn reminds us how beautiful time can be. And also that there is beauty in loss. Autumn teaches us that while the leaves are dying the trunks hold steadfast and simply slow down for their season of rest.

There are lessons here, too: we can allow parts of ourselves and stages of life to be shed, to be tossed into autumn’s golden light, when we trust that the core of who we are and the center of our relationships is solid and good and unchanging.

For there is something that sustains, that seems to outlast time. Some call it the soul. Some call it the Self. I call it love: the through-line, the unbreakable ribbon, the one song that weaves through each phase and stage of our lives.