The Myth of Normal 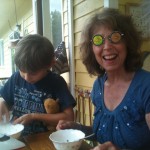 It could be argued that the idea of normal is the one of the most psychologically damaging ideas ever to hit modern culture. For lurking just behind the pervasive and negative running commentary that affects most of my clients, “What’s wrong with me?” is the question, “Why can’t I just be normal?” But what is normal? To me, normal is trying to squeeze yourself into a narrow range of what our society views as acceptable behavior. It’s living life muted because your loud sounds and bright colors don’t fit the mold.  It’s cutting off the flares of who you really are because they don’t fit into the watered-down definition of a “regular” person. It’s not standing out, making sure you’re neither too smart nor too dumb, but living life in the gray places and the safe zones.

The expectation of normal was likely imprinted onto you in utero as the doctor compared your growth chart to other “typically” growing fetuses. The comparisons continued throughout your nine month stay in the womb as your mother faithfully attended her prenatal checkups and received confirmation – either via ultrasound, amnio, or palpations – that you were normal. Perhaps the news wasn’t good and the reports showed an “abnormality”, in which case waves of anxiety were sent down the telegraph of the umbilical cord with the message of, “Oh, no. Something’s wrong. Baby isn’t growing according to the standard,” which, I imagine, was translated inside of you as, “Oh, no. Something’s wrong with me. I’m not normal.”  The comparisons against normal continued at birth, and then at each well baby checkup, at your annual checkups, and, of course, once you started school. Parents and teachers were in quiet, unconscious collusion to make sure that you were “normal”, and any deviance was quickly nipped in the bud. If you were a good girl or boy and had the social and academic skills to fit in, you probably learned the rules very early on and managed to do a good job at your own nipping. You siphoned off the “weird” stuff. You snipped at the “un-prettiness.” Lest you were made fun of, any unusual behaviors or facial expression were quickly tucked away somewhere deep inside you. You achieved normal, and continued on through your life until something broke you open and you began to unpack the real you living in the shadow realm.

And if you didn’t or couldn’t achieve normal, life was probably more painful in your younger years. While the other kids seemed to “get the rules”, you simply couldn’t sit still. How many times did your teacher say to you, with clear exasperation, “Why can’t you just be normal?” You tried to sit still, you tried to snip off the “weird” stuff, but something in your wiring wouldn’t allow you do it. You plodded through school as best you could, and if you made it to college, you likely found a world that, at last, accepted you as you, wild hair and all. In some ways, you were one of the lucky ones: because of your inability to conform to the system, your authentic self remained in tact. But I hesitate to write that as the pain that the outcasts typically endure during their younger years leaves scars deep and wide.

What’s fascinating to understand is that normal is a fairly recent notion. As Jonathan Mooney writes in The Short Bus: A Journey Beyond Normal:

“As I drove, I thought about that word normal. Before leaving on this trip, I had come across a great book called Enforcing Normalcy by Lennard David, who makes a strong argument that the word normalcy did not enter the English language until around 1860. Before then, we had only the concept of the ideal, which no one would ever hope to obtain. In the United States, normal arose within a cultural context as the nation sought to control a growing urban population and Americanize immigrants from around the world. Normalcy, though, is first and foremost an idea that arises from statistics. The normal, norm, or normalcy do not exist in the real world of real people, despite the fact that we are told that we can modify our behavior and train our bodies and minds to reach it. We are told to chase it – in our culture, in our families, in our lives. But when we chase it – as I did – it disappears. Normalcy is like the horizon that keeps receding as you approach it.” (p. 32, italics and bold are mine)

The tragedy is that we spend our early years trying to cram ourselves inside the box only to learn later in life that the people we revere most are those who dared to live outside the box. Then we’re left with the daunting task in our late 20s at the earliest and most often at midlife of excavating the buried parts of ourselves and re-learning what it means to be fully alive and fully ourselves. Wouldn’t it have been so much easier if we had been encouraged to be ourselves from the beginning, recognizing the human beings come in all shapes, sizes, colors, and variances, and that it’s these exact variances that create the color that renders us fully alive? Wouldn’t it be so much healthier to eradicate the concept of normal completely from childhood expectations and allow children to be who they are without apology?

To do this, however, we would have had to receive the support of our parents, siblings, teachers, and friends. We would have had to grow up in a culture that celebrates the individual instead of the collective herd, that understands that differences are what make us interesting. This isn’t an easy request, as it would require not only an overhaul of our education system but of our parenting models as well. And, as a parent, I know firsthand how challenging it can be to encourage your own child’s unique expressions while recognizing that there’s an entire world of children out there that might not be as accepting of his idiosyncrasies as you are. But then I remind myself that, when it comes down to it, everyone has idiosyncrasies, everyone has quirks, everyone has the metaphoric strand of hair that just will not stay in place. When we’re struggling with the idea that we – or our kids – aren’t “normal”, it’s essential to remember that one of two things is true: either nobody is normal or everyone is. In other words, we’re all imperfect human beings, which means we all have foibles and beauties, struggles and gifts, and if that’s the case, the idea of normal is awash in the multi-colored ocean of our humanness. As Elizabeth Lesser wrote in Broken Open:

“We’re all half-baked experiments–mistake-prone beings, born without an instruction book in a complex world. None of us are models of perfect behavior: We have all betrayed and been betrayed; we’ve been known to be egotistical, unreliable, lethargic, and stingy; and each one of us has, at times, awakened in the middle of the night worrying about everything from money, kids, or terrorism to wrinkled skin and receding hairlines. In other words, we’re all bozos on the bus.” (p. 28)

Sometimes, when I’m sitting outside my son’s rock climbing class, I’ll observe the groups of kids there. I’ll notice the kids who seem to fit in and stand at the center of the ring, but I’m invariably drawn to the loner, the outsider, the girl dressed like a boy whose hair is falling out of her ponytail, the boy with the thick glasses who speaks with a lisp. My heart goes out to them and I send them a silent prayer that they hold on to their core selves and ignore the social pressure to be like the rest. But as I continue to observe, I see the cracks in the ringleader’s lovely image. I see a flicker of jealousy cross her face when her friend chooses another girl as a partner; I see a moment of crestfallen eyes as his friend reaches the top of the climb while he stops midway up the wall. In our culture of comparisons, the ringleaders are just as vulnerable to the pain of “not good enough” as everyone else. They may hide it more effectively behind their polished veneer, but the struggle is the same. And I’m reminded of what I know to the true: that there’s no escaping the pain of being human, and we would all be so much better off if we stopped pretending, stopped trying to be normal, and instead reached out a comforting hand as we walk together along this rocky path. Normal, at the core, is divisive, and what we really need is to unite, to hold each other up, to say, “I struggle sometimes. Do you?”

Just as no two snowflakes are identical, so every human being that has ever lived is unique. Isn’t that an extraordinary fact? Of the billions of humans that have ever existed, there has never been anyone who is you. So why would you spend even one minute of your life trying to be like someone else? You were created to be you, not Tommy or Donna next door. You were created with your body and your face and you hair and your gifts and your heart. Doesn’t it seem like there’s some inherent obligation to make sure that you fulfill the privilege of being you instead of trying to be someone else, instead of wasting fruitless time chasing after an elusive and impossible goal of being normal?