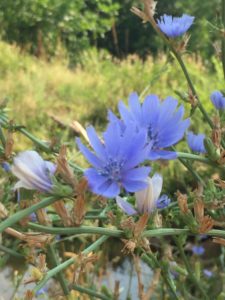 I shared the following client dialogue several weeks ago in a post called The Critical Moment to Break Free From Relationship Anxiety:

“What am I trying to escape?” my clients asks.

“Your feelings. Not the feelings that are attached to your intrusive thought and which you project onto your husband but your core, fundamental feelings of being human: loneliness, boredom, emptiness.”

“So all of the mental torture is because I don’t want to let myself feel that one moment of boredom?” she asks with more than a little skepticism in her voice.

“Amazingly, yes. It’s harder than we think to let ourselves feel that moment of boredom or emptiness without wanting to escape. When we really let ourselves feel it, it’s a death moment. It doesn’t last, of course, and the more we practice breathing into our painful moments, the easier it becomes. But we really have to train ourselves to do that because it’s human habit and cultural conditioning to run from those moments. And there are a million ways to run these days. So the question really is, ‘Am I willing to experience the messiness of being human?’”

Several times a week one of my kids will say to me, “I’m bored.”

My response is always the same: “Good.”

“Because boredom is a part of life, like loneliness, sadness, happiness, excitement, frustration, and disappointment. And when you let yourself feel bored, something new will arise.”

With the proliferation of technology that fills every empty or bored moment with stimulation, I fear that the ability to feel bored is a dying skill. Like letter writing and reading actual books (as opposed to digital books), it’s a skill that I seek to impart to my kids so that they grow up knowing how to sit with the discomfort of boredom without needing to fill it with technology (or the variety of stimulants that will be available to them as adults: food, alcohol, drugs, spending, sex).

Without fail, when I don’t rush to cure their boredom and instead let them sit with it for a while, they find something creative to do. At this very moment, my younger son is lying on his bed exploring a fairy house that he purchased with his birthday money a couple of years ago. It’s a lovely ceramic piece with beautiful colors and interesting designs. It doesn’t “do” anything flashy; that’s not the point. The point is to engage with a piece of art and, perhaps, allow it to lead to imaginary play. He’s tapping it and turning it. He’s holding it and touching it. I have no idea what’s going through his eight-year old head right now; it doesn’t matter. What matters is that he crossed the bridge from boredom to engagement on his own. A piece of learning that he can tolerate boredom has dropped into the puzzle of his psyche.

It’s allowing ourselves to be with those uncomfortable micro-moments instead of running from them that shifts how we walk through life. And as I wrote in the post referenced above, it’s astonishing how difficult it is to embody this simple concept. We seem genetically wired to recoil from anything uncomfortable, not only physical pain but emotional pain as well. As such, we’re culturally and historically trained to rush in to soothe a baby’s or child’s discomfort. For the first part of a baby’s life, a baby’s discomfort must absolutely be soothed (to the best of our ability). But there comes a turning point when we, as parents, must learn to tolerate our own discomfort around our child’s discomfort so that we can allow her to learn that she can handle emotional pain. This is no small task.

Loneliness is another fundamental human emotion that tends to get sidelined by our various addictions (including mental addictions). Because we  don’t learn that we can tolerate loneliness, we develop a neural pathway habitual system that hijacks the discomfort the second it arrives. In fact, we’re so lonely-averse that most people don’t even know when they’re feeling it or that’s it’s normal to feel it.  As a reader commented on the referenced blog: “This is bit of an ‘aha-post’ for me. I’ve always thought of loneliness, boredom and emptiness as pathologies. Maybe because I have felt them more than most people. My heart always sinks when people say: Well ,I’ve not really felt that lonely. So I think: It IS only me?”

It’s not only you. In fact, I don’t think it’s possible to live in this culture without feeling lonely, yet because of our cultural obsession with putting on a happy face, this is yet another area (alongside the grief that arises during transitions like getting married and becoming a parent and the doubt that exists in healthy relationships) that nobody talks about. As the great Jungian analyst Robert Johnson writes in his memoir, Balancing Heaven and Earth, when he asked his Indian friend, Shankar, who was raised in a deeply embedded web of loving community, about loneliness:

“I once asked Shankar about loneliness, admitting that it was one of the most painful dimensions of my life, and he replied, “I’m sorry, Robert, but I can’t contribute anything on this subject because I have never been lonely in my life.” His answer stopped me in astonishment; I thought for days about what it would be like to have a life where you were never lonely.”

So I amend here what I’ve written: perhaps loneliness isn’t a fundamental human emotion but, rather, one unique to the isolation and separation of Western culture. Irregardless, there are always going to be feelings that, regardless of our cultural upbringing, we want to push away. The conscious path is to learn to move toward, as Pema Chodron says, the places that scare us. If we push it away we fall prey to our addiction, and for most people reading this blog, the addition is the escape hatch of intrusive or repetitive thoughts. The moment you can stay with the feeling – “I’m feeling bored, lonely, sad, longing” – without assigning inaccurate meaning to it – “I’m in the wrong relationship or the wrong life” – is your moment of gold.

By the end of writing this post, my son shared what was going through his mind while he was playing with the fairy house:

“Mommy, the fairy house is hollow so they could have made the door open. That would have made it more fun. Why are the windows tinted? I like lying down while I hold it on my chest because I pretend that I’m tiny and this is my fairy house. Ding-dong. Is anyone home? Hello…!”

It’s the stream of consciousness of a mind free enough to wander through the fields and flowers of an imaginary world. It’s a mind unfettered by technology and a soul with enough empty space to dream. It’s a heart that hasn’t been hardened over by the onslaught of insults and meanness that populates most television shows and movies. It’s who we all are underneath the defenses, the intrusive thoughts, the worry, the rumination. It’s our own inner child who is waiting to be set free.