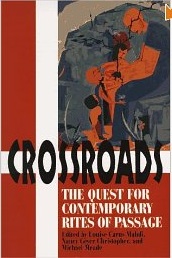 A few months ago, a reader pointed me to a fabulous book called “Crossroads: The Quest for Contemporary Rites of Passage.” Based on the title alone, I knew I had to buy it immediately, and it’s since been a source of inspiration and guidance. As we move into the weekend which invites a slower pace and an opportunity to drop down into yourself, I’d like to share a few pages of the book with you for today’s quote. It’s from an essay by Malidoma Some called “Ritual, the Sacred, and Community.”

“I believe that one of the differences between the modern industrial world and the indigenous world has mostly to do with speed – and not with whether one world needs to have ritual and the other doesn’t. Speed takes toll on our attention by weakening our vigilance. By doing so it endangers the person in speed. On the contrary a life in the slow lane, however boring it may look to the person speeding away, affords the traveler many scenic details to enjoy and saves him the upsetting surprises that result from oversight.

“Indigenous people are indigenous not because they don’t look and act like everybody else, but mainly because there are no machines between them and their gods. There are no machines to bar the doors to the spirit world: one can enter, listen to what is going on within at a deep level, and participate in the vibration of Nature. Where machines speak in place of gods, people are hard put to listen, even more hard put to vibrate with the realm of Nature.

“Thus the two worlds of the traditional and industrial seem to be oddly opposed. The indigenous world, in trying to emulate Nature, espouses a walk in life which is slow and quiet. The modern world, on the other hand, steams through life like a locomotive, controlled by an intimidating sense of power, carelessness, waste, and destruction. Such life eats at the psyche; as it moves its victims faster and faster along, they are progressively emptied of their spiritual and psychic fuel. It is here, consequently, where one’s Spirit is in crisis, and speed is the yardstick by which the crisis itself is expressed…

“…This is so because human senses are devices of communication. Sight is a language, as are touch, smell, taste, pain, and sound. For the Dagara elder, pain is the result of a resistance to something new – something toward which an old dispensation is at odds. We are made of layers of situations and experiences. Each one of them likes to use a specific part of ourselves in which to lodge. It’s like a territory. A new experience that does not have a space to sit in within us will have to kick an old one out. The old one that does not want to leave will resist the new one, and the result is registered by us as pain. This is why the elders call is Tuo. It means invasion, hunting, meeting with a violent edge. It also means boundary. Pain, therefore, is our body complaining about an intruder. Body complaint is understood as the soul’s need for some communication with its spiritual counterpart.

“More often than not, the fast pace of life, made worse by so many drug substitutes, does not allow us to work through our pain. Instead, we think that pain is a signal that we must stop, rather than follow it up to its source. Yet, our souls do not like stagnation. Our souls aspire toward growth, that is, toward remembering all that we have forgotten in the course of our trip to this earth. In this context, a body in pain is a soul in longing. To shut down the pain is to override the call of the soul to change. When this happens it is a repressive measure taken against oneself, which has somber consequences.

“Is it possible to say that pain is good, primarily because it is a call to growth? The Dagara elders would say yes. They believe that a person who has suffered is a person who has heard pain (Won Tuo). The person hears pain as a creative action, and this connects that person with his or her highest self. This connection is in itself a ritual experience awaiting acknowledgement. It pulls the person into the neighborhood of mystery and spirituality. So pain at least teaches us something. It is commotion, emotion, and a call for a rebirth. It teaches that one must return to a code of living that begins with life itself. It draws from nature and seeks to align with what ancient tribal communities have valued for thousands of years: a code of living that allows room for the entire person to exist. In this context ritual means a return to the ancients with a plea for help directed to the world of the spirit. It is therefore evident that, in order for the modern world to heal, it must return to the past, to exactly the point where it began to forget rituals.