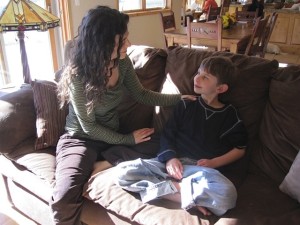 Sometimes I think the five most important and responsible words we can say to our loved ones are, “I’m sorry; it’s not you.” In that moment, with those five words, we communicate to others that our bad mood, grumpiness, bitchiness, or whatever term we prefer to describe a closed heart is not someone else’s fault. We take full responsibility and, in doing so, open a space inside for something softer to enter. When we defend against what is, whether it’s sadness, irritability, anger, exhaustion, hunger, or disappointment, we erect a steel wall around our hearts. In contrast, when we surrender into what is, which means noticing it, naming it, and taking full responsibility for it, we take the first steps toward softening the heart and letting our loved ones inside.

Knowing how many people take others’ moods personally and believe that they are directly responsible for others’ feelings, I can only assume that as children they witnessed their parents’ bad moods and came to the conclusion that it must be their fault. Why wouldn’t a child come to this conclusion? He sees a tired, stressed-out mother or a disconnected, withdrawn father and, without the parent saying, “I’m sorry; it’s not you,” the child can only assume they did something wrong. Sometimes this message is even communicated directly. A child drops a dish and the mother, running on empty, snaps, “Michael! You’re driving me crazy!” The child deflates with shame and draws the conclusion that he’s the source of his mother’s unhappiness.

I hate to admit this, but I’ve said these kinds of words to my kids. I cringe as I write that, as I know, even as the words are flying out of my mouth, how irresponsible they are. Prior to becoming a mother, I never would have expected myself to say speak like that to my child. But being a mother is the great humbling experience that causes most of us to say, “I’ll never judge another mother again.” In moments of exhaustion or when hormones collide with overwhelm I’ve blamed my kids for my bad mood. My only saving grace is that I always, always apologize afterwards and emphasize to them that they are not responsible for my or my husband’s irritability or anger. I think the responsible communication outweighs the blame. At least I hope it does.

It happened tonight: I was tired and had eaten some sugar (which has an almost immediate, drug-like effect that turns me into medusa) and I found myself snapping at my older son for this and that. He saw me rubbing my temples and said, “Mommy, I love you.” It wasn’t a spontaneous expression of love naturally erupting from a sweet moment of connection between us. No, it was the “I love you” that kids use when they’re trying to figure out if Mommy still loves them. I looked at him and said, “I love you, too, sweetheart.” Then he said, “You seem angry.” I could have defended it or denied it, and, had I done so, I would have created a false belief in his mind that said, “Don’t trust my intuition. I sense Mommy’s angry but she’s saying she’s not so it must be me.” But something healthy in me took over and said, “I’m sorry; it’s not you.” I then explained that I was tired and that I had eaten sugar, and he’s old enough to understand the disastrous effect that sugar has on me. I could see relief wash over him, as if every cell in his being could exhale now that I had just relieved him of responsibility for my bad mood.

We hold an awesome, sometimes overwhelming role as parents with immense capacity to reinforce healthy pathways and belief systems in our kids or create unhealthy and false ones that will have deleterious effects on all of their later relationships. I’d like to think that kids are more resilient than this, but in raising my two highly sensitive sons, I can almost see the neuro-pathways of shame being forged in their brains when I don’t take responsibility for my closed heart. Sometimes this level of responsibility is almost too much to bear. But bear we must. It’s not that we have to be perfect; it’s that we have to own our “stuff” as much as possible. We need to realize that our children look to us to mirror back their own knowing and that we have the power either to create or destroy their sense of self-trust. We need to model that it’s okay to lose it, but we must take responsibility for losing it as soon as we come to our senses. We need to model that it’s okay to argue with a spouse in front of the kids but that we must reconcile in front of them as well. We model being human when we’re tired or snappy; and we model being responsible and loving when we say, “I’m sorry; it’s not you.”