In the Flow of this Uncertain Life 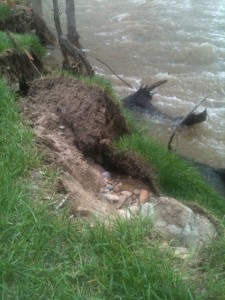 Last weekend was a challenging one for my family. The week of unrelenting rain here in Colorado created overflow in the creeks, and we were faced with a situation that was frighteningly close to the floods of 2013 as the normally gentle waters behind our house surged and swelled into a serpentine river and began to bite off large chunks of our land. Once again, my husband stayed up most of the night for several nights and worked all day fortifying our land. And once again, the boys and I helped where we could but mostly stayed inside, where I tried to calm their anxiety while tending to my own.

Living this close to nature brings the precarious position of our planet forefront into our consciousness. In the midst of this scare, my mind that longs for certainty was already planning our escape: we’ll sell this house and move to higher ground where we don’t have to deal with the risk that comes with living on a creek in a changing climate. But as soon as I spoke that thought aloud to my husband, my heart countered with, “But I love this land. I don’t want to leave,” and my higher mind chimed in with, “There is no true safety. It’s all illusion.” And so, as I watched my thoughts, I settled back into breathing into the uncertainty of the day: Would the waters keep rising? Would we lose more of our land? Would we have to evacuate? The neighbors across and down creek were already planning to leave; perhaps we would have to as well. But these were answerable questions. All we could do was watch, wait, and breathe.

After what seemed like an interminable several hours, the creek started to go down, and as if there was a meter that connected the level of the water to our hearts, our anxiety retreated as well. By Sunday morning, we awakened to a blanket of white snow and could safely say that the worst was over. However, when I woke up I found that the tension of the previous day had settled into my neck, making it impossible to turn it to the right. My joints were stiff and I was emotionally spent. It was Mother’s Day, and I could barely get out of bed.

While my husband caught up on some sleep (he had been up for two straight nights protection and keeping watch), my boys snuggled into bed on either side of me and we spent forty-five minutes immersed in Family Dreamtime, our new term for our morning ritual where one person shares a dream and the others share their associations and projections. Asher shared a dream which featured an owl, guardian of night, magic, a woman’s spirit, and of course the creature who can fluidly turn its neck 180 degrees. I wondered at the synchronicity of Asher’s dream and the fact that my neck wouldn’t turn, and in the moment of bringing the synchronicity to awareness something opened inside. Not a big opening, but enough to nourish my soul with a moment oxygen. I had planned to go to yoga that morning, and while every bone in my body urged me back to bed, the opening allowed me to push through the resistance and I drove to class, knowing that I needed to try to move with this tension instead of settle further into it.

Once there, I breathed deeply into the tension. The greater the tension, the deeper and more attentive the breath. In other words, I’m learning in yoga, as if life, that it’s easier to stay focused on my breath when the pose is “hard” – that the pain or tension calls my attention with such force that I have to listen. In that moment, I can either chatter on in my mind about how hard the pose is or I can breathe deeply into the challenge. Or both. Usually I do both. But ultimately if I can bring my loving attention to whatever is painful it moves and I feel a sense of flow to my practice.

The chatter moved to breath until tears broke free from hips and neck like water from rock, then walked across the lawn to merge back with their original waters, meeting the creek flow at its source and connecting me to awareness that it’s all okay. Fear is lack of relationship to the Divine, my teacher says, quoting her teacher. And again, I’m connected to the flow, the link of teacher to teacher like a line of ancestors collecting wisdom and passing it down.

At the end of class my teacher said something like: We sit so that we can develop the Witness self, our core essence that can see, hear and feel everything but not become attached to it. Yes, that’s it. That’s what I teach and what I try to live: To feel the depth of whatever feeling arises – grief, fear in the face of real danger or the unknown, uncertainty, anxiety – to lean into the “fundamental ambiguity of being human”, as Pema Chordron writes, while connecting to the deeper, unchangeable essence that is simultaneously attached and unattached to this human life.

Just two days later I sat by the creek, which had gone down two feet and now rushed past our impossibly green rain-fed lawn that stretched like a magic carpet before me, and delighted in the breathtaking beauty. How could it be that just 48 hours earlier I was sending my husband text messages that I wanted to move? “How’s that for duality?” my friend, Carrie, commented when I shared my current state with her, referencing the contrast to what I had been feeling just two days earlier.

I teach and learn the same message over and over again: Certainty is an illusion, and yet ego-mind will do whatever it takes to chase after it. We chase it by seeking the single, definitive answer to impossible questions like, “Do I love my partner enough?” and “What if I’m gay?” The ego believes that if we can just answer this one little question we will have found safety. We chase it by needing confirmation that we’re making the “right” choice, by trying to avoid failure, and by running from pain. And in my case, last weekend, I chased after it with the illusion of the perfect home, safe from any natural disaster.

Later that day, after dinner, the four of us walked to the river’s edge and made an offering to the land: to Great Mother who is so much more powerful than us, and who will exact her claim when we insist on living in ways that exert dominance of Her and others; to Chief Niwot and his people, who once dwelled here and for whom this creek is named; to the river spirits and creek waifs and all of the invisibles who dwell here still. And what I’m left with after a forty-eight hour ride on these rapids of life is profound gratitude:

So grateful for this day.

So grateful for my family.

So grateful for the sun.

So grateful to be alive.