Netflix’s “After Life”: A Walk Through the Valley of Grief 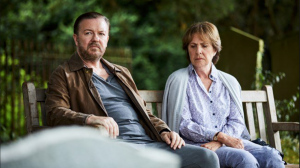 “Though no one can tell us how, we have to work this great battle again and again: to leave the underworld – not to harden – and to make our back into the land of the living.” – Mark Nepo, The Book of Awakening

People often ask me, “How do you grieve?” There’s not one answer, of course, for we humans are complicated and unique, which means there are no templates or timelines for how to walk through the valley of grief. Anyone who tells you that they have the answer or can rattle of “5 steps to grieving” is attempting to encapsulate the messiness of life into a neat and definable package. The internet these days does make you think that life can be turned formulaic and packaged into bite-sized and easy-to-follow steps for instant happiness, and while we may click the bait and read those somewhat compelling articles, another part of us knows that life is infinitely more nuanced and amorphous than the mainstream internet would have us believe.

I don’t normally watch mainstream media of any type as it tends to irritate me more than nourish me, but when my husband suggested that I watch Netflix’s new series, “After Life”, with Ricky Gervais and explained that it was about a man grieving his recently deceased wife, I was intrigued. As those of you know who follow my work, allowing ourselves to compassionately attend to our grief is a central component to breaking through anxiety, so I was curious how Netflix and Gervais would handle this sensitive and often overlooked topic.

For Tony, the main character, his grief initially presents as depression, despair, and acerbic anger. His quippy comments are offensive at worst, comical at best. But we make room for them because we also see his good heart and the depth of his love for his wife. When a comedian asks what his story is he says, “My wife died earlier this year, and it broke me. Not a day goes by when I don’t think of killing myself. I just don’t see any point in living.”

He’s in heart-wrenching pain, the deepest pain we can feel as human beings in the wake of losing a loved one. A great deal of our fear and anxiety stem from this one primal fear: the fear of loss. And here he is, in the center of this fear made real, dealing with it in the only way he knows how. And how is he dealing with it? By choosing to remain alive – barely – but walking through the world with anger at the forefront of his interactions. Given that anger is often the only acceptable emotion for men, his response makes sense. Yet anger doesn’t help grief heal. It suppresses the grief until it festers into despair. By the end of episode three, as he’s self-medicating his pain with heroin and sinking into oblivion, I wondered how he was going to turn this around.

Angels All Around Us

But there are angels along the way, as there always are. When we’re in the depths of grief, it’s easy to feel like we’re alone. We are never, ever alone.

There’s his Dad’s nurse who, like many nurses, is the epitome of selflessness but also doesn’t hesitate to give Tony a piece of her mind. There’s his dog, the true hero of the show, who saves Tony’s life multiple times. There are friends at the office who tolerate his atrocious behavior and keep trying to lift him up. And there’s the delightful and wise older woman in the cemetery, also grieving her deceased spouse. From their first meeting, we can see their connection and a window into Tony’s undefended heart; the protections soften when we connect with others who have a shared experience.

It’s the woman in the cemetery who is the true healer in the series (as opposed to his therapist, who is pathetic and, honestly, an insult to the profession.)  In one pivotal scene, the woman says to Tony:

“We’re not just here for us. We’re here for others. All we’ve got is each other. We’ve got to help each other struggle through until we die and then we’re done… What I’m saying is that I think deep down you think life is still worth living. It’s nowhere near over for you. You’re in pain. The thing you lost is the same thing that can stop that pain.”

There are nuggets of grief-wisdom embedded in this statement:

To begin with, it’s Tony’s connection with her that helps him to open. He feels loved by her and he feels seen in their shared experience of grief. We cannot heal alone. We cannot walk through life alone. We need mentors and elders, those who have walked these paths before, to shine the lamplight that guides the way through the darkness.

She also opens his mind to a possible gateway through grief: focusing on giving to others. This isn’t about sidestepping our own grief; rather it’s an awareness that when we over-indulge in grief, we truncate the healing process. There’s a time and a place for sitting alone and crying and there’s a time to get outside oneself and give to others. As the Dalai Lama teaches in The Book of Joy:

“This concern for others is something very precious. We humans have a special brain, but this brain causes a lot of suffering because it is always thinking about me, me, me, me. The more time you spend thinking about yourself, the more suffering you will experience. The incredible thing is that when we think of alleviating other people’s suffering, our own suffering is reduced. This is the true secret to happiness.”

She says to him that the thing you lost – love – is the thing that can heal the pain. Love is our greatest risk and it’s also our greatest healer, and real love is what you give. She’s not saying, “Go out and find someone to love you and then you’ll be fine.” She’s saying: Go love someone. Spread kindness. Be the goodness that you are. Not in a grand way, but in a way that embodies by the phrase: Random acts of kindness. It’s Tony’s decision to be someone who implements random acts of kindness that heals not only his own grief, but others’ as well.

We Grow Through Pain

Through their friendship and as the show evolves, we see Tony let go of his defenses and open his heart to the kindness and goodness that live at the center. We watch him embody a statement that I say every day to my clients: we grow through pain. Tony would not likely have shifted into this expanded version of himself had he not been broken open first. Had his wife not passed away, he would likely have remained in his safe and predictable little world, content to live their happy-enough life.

But life had other plans, as life often does. And it’s through these curveballs – the descent into anxiety, the terror of a panic attack, the hell-realm of insomnia, the heartbreak of loss – that we’re given opportunities to shatter the old husks that are no longer serving and step into a new version of ourselves.

It’s through loss that we grow.

It’s through walking through darkness that we reach for more light.

It’s through our shared pain that we reach for each other, and it’s through his reaching – the holding of hands, a shared smile across the shards of unshed tears – that we come home.

After Life walks us through the shadow of grief until we emerge into a field of kindness. It’s not a perfect show – and there are a couple of scenes that are deeply disturbing on many levels – but ultimately it reminds us that we have a choice when life hits us hard: we can remain stuck in the smallness of our world where we feel victimized by our loss or challenge, or we can reach across the vast spaces that seem to separate us and clasp hands with humanity, recognizing and remembering that nobody is exempt from loss. It reminds me of the often-told Buddhist story, The Parable of the Mustard Seed:

Kisa Gautami was a young woman from a wealthy family who was happily married to an important merchant. When her only son was one-year-old, he fell ill and died suddenly. Kisa Gautami was struck with grief, she could not bear the death of her only child. Weeping and groaning, she took her dead baby in her arms and went from house to house begging all the people in the town for news of a way to bring her son back to life.

Of course, nobody could help her but Kisa Gautami would not give up. Finally she came across a Buddhist who advised her to go and see the Buddha himself.

When she carried the dead child to the Buddha and told him her sad story, He listened with patience and compassion, and then said to her, “Kisa Gautami, there is only one way to solve your problem. Go and find me four or five mustard seeds from any family in which there has never been a death.”

Kisa Gautami was filled with hope, and set off straight away to find such a household. But very soon she discovered that every family she visited had experienced the death of one person or another. At last, she understood what the Buddha had wanted her to find out for herself — that suffering is a part of life, and death comes to us all. Once Kisa Guatami accepted the fact that death is inevitable, she could stop her grieving. She took the child’s body away and later returned to the Buddha to become one of his followers.

In the end, After Life is a celebration of the human spirit and depiction of one of the abiding and paradoxical truths about emotions: pain and joy live in the same pocket of the heart. It’s also a reminder that there is life after loss. At the core of anxiety – relationship anxiety or otherwise – is the fear of loss, and more specifically, the fear of death. Our minds attempt to protect our vulnerable hearts from this inherent risk in loving through a variety of defensive mechanisms, all of which are designed to convince us not to step into love’s risk. But what After Life teaches is that a full life is possible after we lose a loved one. We have to walk through the valley of grief, and this will look different for everyone, but eventually, through the kindness of humans and the unconditional love of animals, we find our way through. We live again, and we even love again. And eventually, hopefully, our pain leads us to make the choice that our world so desperately needs today: to soften instead of harden, and in the softening we choose to open our heart again, link into the interconnectedness of compassion, and make our patch of the world a kinder place.