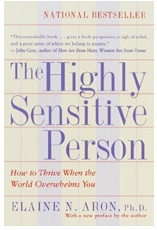 I’ll never forget the day I was walking down 24th Street in San Francisco and I saw a book called “The Highly Sensitive Person” by Elaine Aron sitting in the store window. The title stopped me in my tracks and I thought, “Someone actually wrote a book about me?” I went inside, read the jacket, bought it, and devoured it in two days. Finally, someone had scientifically explained why I had always felt different, more sensitive than other people, more attuned to subtleties and nuances, and more prone to anxiety. On the home page of her website she offers the following bullet points about being highly sensitive:

Does this sound like you? If you’ve found your way to my sites and blog it’s highly likely you’re an HSP. I’m often asked by my clients who are struggling through a transition, “Why aren’t other people having a hard time with this transition?” My answer used to be something along the lines of, “Everyone responds to transitions differently. Most people have a hard time with change but they respond to the difficulty by getting busy or going into denial, so it might not appear that they’re struggling. And while one transition is easy for one person, the next transition might knock her to her knees.” But more and more I’m finding that there’s a profile for the person who is affected deeply by life’s transition, and included in this profile (alongside being a perfectionist and a high achiever) is being a highly sensitive person (which also includes having a hard time making decisions).

Highly sensitive people are also more attuned to every possible scenario and have active imaginations, which makes us more prone to anxiety. This trait probably served us well when we were living in the bush and needed to alert the tribe when we sensed a tiger around the next bend, but for our modern-day lives, attuning to every possible danger usually lands us in a wasps’ nest of anxiety as our highly imaginative minds spiral out into the black hole of “what-if?” thinking. One of the learning curves is to distinguish between areas where we do need to follow our instinct and acquire more information and areas where we need to let go.

If this sounds like you, I encourage you to spend some time on Ms Aron’s site and take her self-test. As with every area of transitions, the more you understand about yourself and the context in which you’re transforming, the more easily you’ll accept what’s normal and be able to approach yourself with the compassion you  need to move from anxiety to clarity and joy.