A Symphony of Contradictions 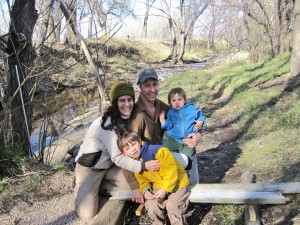 As brisk autumn brushes lips with hot summer, I become aware, as I always do this time of year, of the interplay of opposites and the symphony of contradictions that are inherent to life and are amplified during transitions. The bride is simultaneously grieving and exultant; the new mother longs for her old life as she celebrates the miracle in her arms; the parents ache in their empty nest while wondering what new possibilities will fill the spaces.

Lately, the urge to have another child has risen up in me. Deep down, I’m quite certain that we’re ready to close the door on childbearing, but as Asher grows into little boyhood and Everest into big boyhood, I’m left with the longing to start the process again with another baby. Is it my grief at watching them grow up that’s igniting this longing? Probably. Is there a part of me that hopes to stop time, or at least slow it down, by bringing a third child into the world and witnessing the miracle of growth from the beginning again. I think so. I see families of five and I pause. I fantasize about our future with three grown children gathering at the holiday tables. I wonder about a little girl. I dream of three sons.

And then, with a sad and happy sigh of grief and relief, I know that we’re done. The current configuration makes sense to me: two adults, two kids, one kid for each hand, one arm for each child. We’re so blessed with our children, our family of four, and it feels complete. I’ve sold or given away most of our baby gear. The thought of pregnancy makes me shudder and the thought of giving birth again triggers actual pain. Nursing, night wakings, the anxiety that accompanies the fragility of the newborn stage… phew! I’m thrilled to be done and moving on to the next phase of parenthood and next stage of my life.

And then, the wonder… is there one more waiting to be born to us? Could I do it all again?

In my 20s, when I was struggling with a major life decision, my therapist gave me a powerful exercise. He suggested that I imagine holding one side of the decision in one hand and the other side in the other hand, then extend my arms out like a cross and stand, sit, walk around, and dance with the two opposing positions. At first I felt a bit silly walking around his therapy room holding two invisible decisions in my hands, but as I adjusted to the exercise I could feel its effect taking shape in my body. He was asking me to enact physically the Jungian phrase of “being on the cross”; by bringing the opposing forces into my body, they did eventually resolve into an answer as clear as a point of light. It’s an exercise I’ve used dozens of times with my clients and it has never failed to achieve a similar result.

As a culture, we thrive on the illusion of certainty and control. As such, we define our reality in black and white terms, believing that we’re either happy or sad, regretful or relieved, scared or excited, without allowing for the possibility for several seemingly contradictory emotions to coexist in a single moment. It would be nice if life were cut and dry and we could slice ourselves into neat little packages, but it’s usually much messier than that.

Life is full of contradictions. Sometimes they’re resolvable and sometimes they’re not. When we stop resisting them, there’s something quite beautiful about contradictions. Like the liminal stage of transitions, like dawn and dusk, there’s potency in the tension that lives at the tip of the breaking point, and when we can dance there, even just to breathe into it for a moment, spaces open up inside. And here’s the contradiction inherent to contradictions: It’s at that moment when we stop resisting what is that the tension often resolves and the truth of what is meant to be reveals itself.